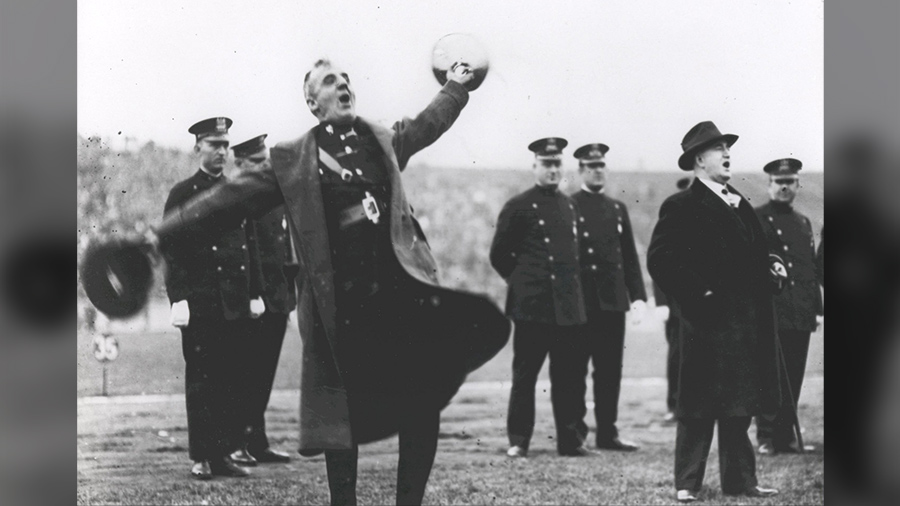 Men need to be wounded.

They need to take a blow. They need to get cut and bleed. Male wounding is a part of every culture and is vital in the transformation from boys into men. It signals a separation from childhood and the protection of mother to initiation into the tribe.

It gives a cosmic meaning to a man’s life.

This has been a known truth for millennia. It’s interesting that the concept of male initiation has been making a comeback in the writings of a man like Jordan Peterson. Peterson uses theories based on the writings of Carl Jung to explore the development of young men. His conclusions are often spot-on, which is why the left hates him so much. But they are also not that novel. Anyone who grew up in a traditional American (or especially Irish-Catholic) household, and played football as a kid, understood the idea of male wounding. We lived it when Peterson’s audience was still in diapers.

Why “Brutal” Football Games Are So Important

This is probably why I so vividly recall the day in 1983 that I got a bloody nose playing football. I was more interested in rock and roll than sports as a student at Georgetown Prep, but I also always had athletic ability, probably thanks to my grandfather who was a professional baseball player. Football was the big sport at Prep, and after being razzed as a rock and roll wastoid by one of the jocks, I decided to go to the one-week football camp that August.

It was brutal. You’d practice in the morning heat, including the “nutcracker” drill where the running back (I and a few other victims) would take a handoff and run straight into a snarling line of defense players. You’d “get your bell rung.” Then stagger out of it thinking it was World War I and you were on Mars. After an afternoon break (especially if the heat was above 90) the team would scrimmage. During one of these run-throughs I took a sharp blow to the head. I still remember a thunderstorm had broken out. My helmet flew off, and after colliding with a couple other guys making a tackle I heard a pop. I looked down to see a crimson stream running down my jersey. My nose was bleeding.

Are You Willing to Suffer?

I refused to come out of the game. It wasn’t because I was so tough. It was more because I wasn’t. Despite my fear and weakness, I knew in that moment I had become part of something larger. It was a signal to my friends (and any girls watching) that I was willing to bleed and suffer and even die for our tribe. I stood there in the literally bloody rain, in essence being baptized to a cause bigger than myself.

According to psychologist James Hollis, rites that provide for the initiation of young men into the world of adulthood are as crucial to male health as fresh air and food. Read his book Under Saturn’s Shadow: the Wounding and Healing of Men. There Hollis examines how, before the modern age, rites of initiation for adolescent boys were a crucial part of tribal and community life. These were often violent ordeals. The Mandan Sioux Indians would drive a skewer into the pectoral muscles of the initiate and raise him by ropes until he fainted. A tribe in the South Pacific had boys jump off of a huge wooden edifice. In Ethiopia young men have to prove their worth by jumping over cows. In America there are still subcultures like surfing and skateboarding where a would-be member has to prove himself, often by scrapes, wipeouts, minor injury.

In the traditional rite of Confirmation, the bishop would slap each adolescent to remind him that Christians must suffer. Doubtless boys got much harsher treatment there than girls.

Stepping on Stage in the Cosmic Drama of Salvation

To our modern sensibilities these rites might seem odd and even sadistic. But premodern cultures knew that they served an important purpose. Rites of initiation provided a formalized ritual to signal that a young man was becoming an adult. More importantly, they showed that a boy had entered into a larger cosmic drama. It meant that his life had meaning not just in the community, but also to God (or the gods). Here’s how Jung described it:

That gives peace, when people feel they are living the symbolic life, that they are actors in the divine drama. That gives the only meaning to human life; everything else is banal. … A career, producing of children, all are maya [illusions] compared with that one thing, that your life is meaningful.

Why Kylo Ren Was Kind of a Whiner

In the original Star Wars films, Luke Skywalker has to go through a lengthy and difficult training and initiation process. The goal was not just to become physically powerful, but also to learn the ways of the Force, the thing that holds the entire universe together. This is why the character Kylo Ren, who appears in subsequent films, is so interesting.

Ren’s parents, Han Solo and General Leia, were both potent warriors. Yet their son seeks to test himself against a grandfather he never met. What went wrong? It turns out that his father, Solo, was swashbuckling around the galaxy instead of raising his son. Kylo Ren yearns for supernatural as well as physical power, but he also craves testing — a rite to give his life meaning. This comes out when the character, Rey, who is strong with the Force, reads Ren’s mind. Rey learns that Kylo fears he’ll never measure up to his grandfather, Darth Vader. Ren’s lack of meaningful initiation into manhood has left him confused, explosive and dangerous. He’s also a bit of an emo whiner.

Where Are the Men in Full?

Without a larger cosmic vision, there are no initiations. Or there are ones that teach violence with no redemptive purpose. The alternative to these rituals? Self-proclaimed progressives offer a culture that eschews violence of any kind except in simulated form. Hence boys who can dazzle in video game first-person mass killings, but can’t hit a fastball.

No, of course boys who read poetry, create art and speak philosophically aren’t somehow weak or unmanly. Those skills are part of the whole man too. At Georgetown Prep we were taught that a well-integrated man can be an athlete, actor, poet and philosopher. In fact, having all those things in the mix was a sign of health. My own father had risked his life traveling the world writing for National Geographic. He could also quote The Iliad from memory and explain the importance of C.S. Lewis, Edward Hopper, Terence Malick and Emily Dickinson.

We need our art, and we need our bloody noses. Young men who are not properly initiated can suffer from psychic dissonance, depression, rage, and a lifelong inability to handle relationships.

In Under Saturn’s Shadow James Hollis has it right:

What the modern man suffers from, then, is the wounding without the transformation . . . He is asked to be a man when no on can define it except in the most trivial of terms. He is asked to move from boyhood to manhood without any rites of passage, with no wise elders to receive and instruct him, and no positive sense of what such manhood might feel like.