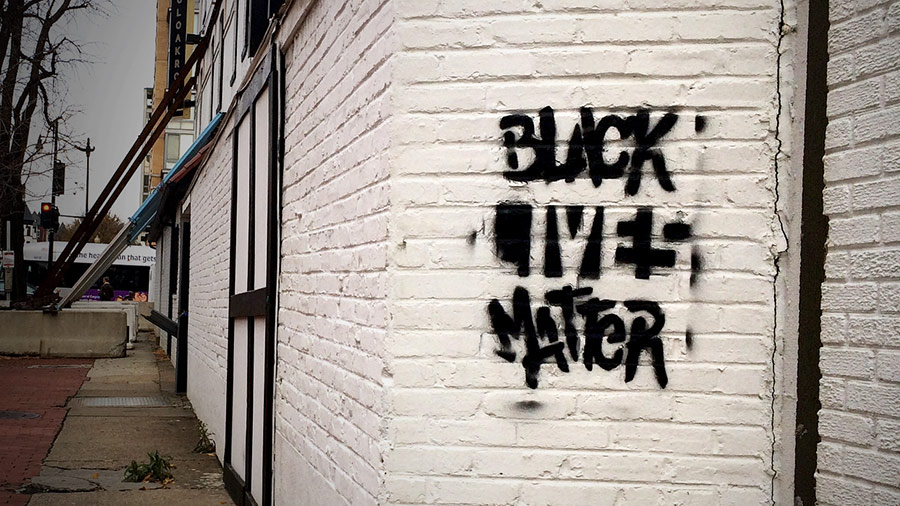 I was riding today with a friend to buy oil and optics for my new AR-15, and the subject came up: “Should we say that ‘black lives matter’?” In other words, should we use those words? Of course we affirm the truth that lies behind them.

But the organization which took that phrase as its lucrative trademark and name means something radically different. (As I’ll unpack below.) By repeating its name like a mantra, we’re helping that organization get richer and more powerful, and hence a lot more dangerous.

What’s more, leftist thugs are demanding that people incant the magic phrase like a religious formula, for instance threatening diners in Washington, D.C. For that reason alone, no one should do it.

Instead say something deeper and more meaningful, like “Black lives are sacred, born and unborn.” And demand that others say it back. Most of them won’t, of course. That violates their religion, which is Abortianity.

Let me give another example to show what I mean. Alt-right agitators have tried to popularize the phrase “It’s Okay to Be White.” Now do I believe that? Of course I do. I have not the tiniest particle of self-hatred or guilt about my Irish and Slavic background. I think even Joe Biden considers that Caucasians like him have a right to live. To have kids, own property, even vote — as long as they vote for him.

But knowing that the people who coined the phrase really mean that whites should seek all-white ethnostates excluding others — if need be achieved by violence — would you really use it? I hope you wouldn’t. You’d find a different string of words. Maybe: “Euro-Americans are as good as anyone else.” Or something like that. You’d be especially careful not to repeat a racial-extremist catchphrase if you saw the alt-right group behind it collecting hundreds of millions of dollars, and wielding street thugs to beat up political dissenters, and burn down American cities.

Seriously, imagine that the GOP were being led around by the nose by a group called “It’s Okay to Be White,” and Republican mayors were letting the group’s militant wing rule their streets and trash their cities. Would you really repeat that anodyne phrase, once you knew how poisonous and manipulative was its intent? Not if you had any self-respect.

At Least As Evil as the Alt-Right

But how bad, really, is the organization raking in millions and ruling the streets under the catchphrase “Black Lives Matter”? It’s at least as evil as the white nationalist groups whom President Trump disavowed in Charlottesville. (Yes, he did. Here’s the transcript. The reporters are lying. Again. )

See what Breitbart News uncovered back in June about the organization’s founders and leaders:

The co-founder of the Black Lives Matter (BLM) movement, Patrisse Cullors, was the protégé of a communist-supporting domestic terrorist for over a decade, spending years training in political organizing and absorbing the radical Marxist-Leninist ideology which shaped her worldview.

Eric Mann, who mentored Cullors for over a decade in community organizing, was a member of radical-left militant groups: Students for a Democratic Society and the Weather Underground, which bombed government buildings and police stations in the 1960s and 1970s.

In a newly resurfaced video from 2015, Black Lives Matter co-founder Patrisse Cullors reveals that she and her fellow BLM founders are “trained Marxists.”

Go ahead, watch the video where Cullors blithely calls herself that:

Commies Still Chic, Unlike the Nazis

She says “we’re trained Marxists” as blithely as Richard Spencer might say, “we’re white nationalists.” But so far she’s getting away with it, as the pitiful Spencer isn’t. That’s because communism, unlike Nazism or other forms of racism, still has academic prestige. Its concentration camps were never liberated, nor the victims shown on TV. Almost none of the architects of the 100 million deaths imposed by Marxists were ever put on trial. Hollywood doesn’t make many movies about the Gulag.

The same day the powerful Shoah film Schindler’s List opened at thousands of theaters nationwide, the first film about the Ukrainian genocide, Famine 33, opened too. I ran out to see it. It played in two theaters, in two American cities. For two whole weeks. (But this powerful film’s now on Youtube, and you should see it.)

Indeed the most populous country on earth, rich and swaggering China, is still ruled by “trained Marxists.” And it’s running concentration camps today, forcing Uyghurs to work as slave laborers making sneakers. For Nike. You know, the fat corporation that really, really wants you to repeat the phrase “Black lives matter.”

Not a Game but a Gate to Hell

Maybe you don’t want to know this. It makes your life too difficult. It might ruin some professional sports for you, knowing that systemic Marxism has permeated their ranks. Maybe your Woke sister or soft-headed pastor has already plastered the magic phrase all over the place. And you’d rather not know what it really means. You’d rather pretend that the Ouija board somebody bought you is just a “game,” not a gate to Hell. But a still small voice is telling you otherwise. It’s warning you not to burn that little pinch of incense to Caesar.

It’s inviting you to wonder what it means to be a “trained Marxist.” Not just some college student who stumbled on “The Communist Manifesto” and for a while fell for its errors. Nor some hapless Cuban or North Korean forced to repeat Marx’s dreary slogans. No, someone trained in the dark catechism of cynicism, ruthless power-seeking, atheism, and tyranny that is Marxism at its core. Someone trained in the art of infiltrating innocent organizations and wielding anodyne phrases, as Communist parties have done since 1917. Someone less like a child caught up in playing with a Ouija board, and more like a priest of Satan.

Don’t invite their dark spirits into you, by repeating their honeyed poison.