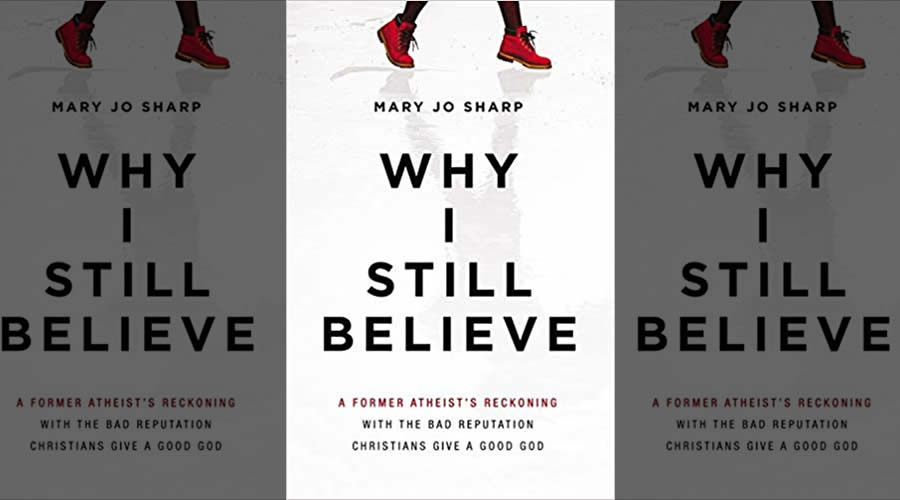 Mary Jo Sharp’s agnostic parents introduced her to nature, science and art. The amount of beauty that she saw in the world, especially in nature, impressed her. She felt a sense of wonder and awe at the universe. “I began to wonder what all of this meant. Was it just that we lived and died and there was nothing more to it? It didn’t seem to match up with my experience of it.”

In a way, her agnostic parents accidentally pointed her to Christianity.

A Love of Beauty

Mary Jo, a former atheist from the Pacific northwest, is now a Christian author and apologist. Her newest book is Why I Still Believe: A Former Atheist’s Reckoning With the Bad Reputation Christians Give a Good God. Mary Jo spoke with The Stream about her book and how she became a Christian, even with agnostic parents.

As a musician, she played works of art intended to move people. “I thought, ‘Move them to what? What are we looking for? What are we trying to experience?'” She began to look for the meaning behind all of the beauty she saw in the world.

In high school, Mary Jo’s Christian band director talked with her about Christ. He then gave her a Bible. When she read the Bible, it all made sense — beauty, goodness and truth; a sense of right and wrong; and justice and injustice. “It was giving a grounding to all of those things. And that’s how I moved out of my youthful atheism into belief that there must be a God behind the universe.”

Accepting Jesus — and Disillusionment With the Church

Mary Jo gave her life to Christ at 20. She decided to go to church for her first worship service. She put on her best dress. But when she stepped inside the church, the pastor’s wife confronted her. She told Mary Jo that she needed to find more appropriate clothing — “something that doesn’t show cleavage.”

Mary Jo wrote in her book that “first-time church attendance should come with a disclaimer. Churches could post a sign or place fine print at the bottom of the bulletin: ‘Church attendance may cause extreme discomfort. Side effects of interactions with humans include, but are not limited to, doubt, anger, disappointment, and disillusionment.'” She immediately began to distrust the church leaders.

“When I stepped into the church,” she wrote, “I expected that other people would have been drawn to God through [goodness, truth and beauty]. An expectation that was sort of naive and idealistic — very naive. … I just found people like anybody else in the world, and they have all the same vices and problems in their lives as other human beings.”

She discovered that some Christians were kind of like doctors who smoke. They tell people that smoking will kill them and yet some smoke anyway. “I thought, ‘Ah, that’s like the Christian faith, right? The people are going to tell me ‘God loves you, He died for you. There’s no condemnation in Christ,’ but they won’t necessarily live that way.” It’s because they’ve adopted lifestyles that are in rebellion to the truth they profess. She began to question whether what she believed about Christianity was true.

The Search for Truth

She looked for books — specifically, books on the resurrection and how she could know that Jesus rose from the dead. She found Lee Strobel’s The Case for Christ in a church library. That started her on the way to becoming an apologist. She researched the people that Strobel researched and watched apologists’ debates. In that process, Mary Jo found an ad for a degree in apologetics at Biola University. She jumped at the chance.

At one point in the program, a professor gave an assignment in which students could develop a blog. That assignment inspired Mary Jo to write hers on the resurrection of Christ. Between the blog and her friendship with two outspoken apologists, Mary Jo said she started a ministry that she didn’t intend to have. “I got asked to write books. I got asked to speak. I got asked to go out and help these guys do their debates. And then they sort of gently nudged me into debate. … That’s how I got to be an apologist.”

What Christians Should Know

Since Mary Jo’s parents raised her without a belief in God, she relates to non-Christians. Those raised like her don’t understand the need for religion. “You don’t understand why this person needs this. You think maybe they had some kind of need in their life that you don’t have.”

Since non-Christians don’t get the need for a savior, Christians shouldn’t “just barrel into that as if the other person understands.” If someone had asked Mary Jo if she was saved, she would’ve asked, “Saved from what?”

Christians should know that atheists see Christians as big hypocrites. It’s “because [they] profess all this goodness and truth and yet [they’re] not living up to that — to [their] own standards.” They may see Christians as putting on a show, which can turn people off from Christianity.

Christians can also come across with an attitude of “ignorance is bliss.” That’s why Christians should be prepared when they engage with others. Mary Jo points out that while people don’t need a degree in biology or physics, they should be able to thoughtfully engage at whatever level is possible for them, recognizing others may be more well trained in these areas.

Conversely, Christians shouldn’t be intimidated by atheists in scientific fields. For example, she notes, “If I’m a biologist, I should be able to introduce you to my field and my arguments at whatever level you’re at. That’s what a good educator does.”

What Atheists Should Know

They are not small, insignificant issues. They are basic philosophical foundations from which people get human rights, governing laws, educational philosophy and more. Christianity “comes with a robust philosophical view of the world. It’s not just things we say because we’re afraid of the dark or afraid of death. These are things that make sense of the universe in which we live.”

There are two main takeaways from Mary Jo’s book. The first is the fact that the hypocrisy of Christians can never negate the truth of Christianity. Mary Jo says that’s important to know because hypocrisy is a growing objection to belief in God.

Second, people thinking about stepping away from the faith should investigate what it is that they will be stepping into if they leave the Christian worldview. “That’s the thing that I don’t see when I’m reading deconversion stories or stories of people leaving the faith. They talk about what they’re leaving, but they don’t really talk about the atheistic worldview into which they’re stepping.” People should ask themselves whether they really believe there’s no meaning or purpose or value in the universe. Do they truly think that there’s no good or evil? Do they know what they’re giving up when they give up belief in God?

Mary Jo’s book is for those who are struggling with hurt in the church and thinking about whether they want to stay with the church. It’s also for seekers — people who are trying to figure out what it is that they believe and why they believe it. It introduces, in a non-threatening way, some deeper concepts that need to be explored within Christianity and atheism.