On this page you’ll find the second half of my interview of my old friend Eric Metaxas. One of the key themes in his fun-but-deep new memoir, Fish Out of Water, should matter to everyone. Namely, how do kids who grow up in “good-enough” Christian homes lose their minds and their souls in college? As Eric’s story reminds us, this is nothing new. When he and I were at Yale in the early 1980s, we faced the subtle but overpowering pressure to … conform.

And conforming didn’t just mean getting better table manners or avoiding the ethnic slurs you’d picked up from your parents, as in my case. That’s the kind of “civilizing mission” we hope our colleges will perform. No, Eric recounts in his book something much more subtle and sinister.

Way back in the early 80s, the faculty weren’t so overwhelmingly biased toward Darwinian materialism and Woke leftist hysteria as they are most places today. By today’s standards, they were positively … tolerant, if not bipartisan. That didn’t really matter. It wasn’t the lofty professors or even the grubby grad students who mattered. Our fellow students were the ones who adopted and enforced a uniform worldview. And woe betide the Yalie who colored outside the lines. 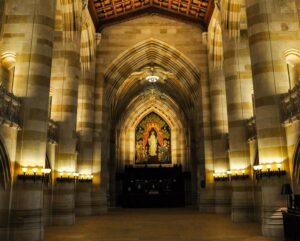 Eric explained how he arrived as a transfer at Yale on fire with the quest for life’s deeper truths. Up to then, he’d been formed by his Greek Orthodox, blue-collar childhood, and a youth in wholesome, patriotic suburban schools. But the Zeitgeist he encountered at Yale was very different. In the book, he sums things up with an historical anecdote.

The most exquisite building on campus is probably Sterling Memorial Library. It’s built to look like a medieval cathedral. The main circulation desk resembles a high altar. (I was one of the Catholic freshmen who instinctively genuflected the first time I passed it.) There’s a mural over the “altar” that looks like the Virgin Mary, though on closer inspection it turns out to be “Alma Mater” (that is, Yale). Even the phone booths look like old-fashioned wooden confessionals. 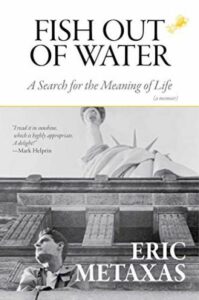 Most students just think that’s fun, as I did. But reflecting on what made Yale what it is, as he wrote the book, Eric did some digging. He found out that in the 1920s, the school embraced secularism wholesale. It suspended required chapel attendance. It canceled plans to erect a grand, new campus-wide chapel building. Instead it spent the money on … this library, which it built to just look like a cathedral. Even the gargoyles on the building convey a world-weary, if high-priced nihilism.

And that’s what Eric found his fellow students mostly took for granted. At least, when it came to religion. In one of the most lyrical passages of Fish Out of Water, Eric talks about “Celery Green Day.” That was the time in spring when the leaves of the trees achieved a lovely, ambiguous, yellow-green shade. He and his new friends light-heartedly marked the day as a kind of feast day of relativism, a day when you had to admit that the leaves could either be one color or another. The yellow leaves might be “your truth,” while green leaves are “my truth,” and isn’t it … relaxing that we don’t have to fight about deciding on just one official answer?

If ultimate truths were negotiable, pastel, and mellow, politics were the opposite. Eric reports on how absolute dogmas and virtual moral panics spread through the students on topics like … Yale’s investment in apartheid South Africa. Or the danger posed by the Moral Majority. Or gay rights. The list of items on the creed went on and on. But you didn’t even have to argue about these issues. One day, the trendy, artsy kids would start wearing a given political button. (A pink triangle, an African National Congress badge, the menu was rotating.) Within a few weeks, pretty much everyone was wearing them, even the jocks (or what passed for jocks at Yale). And presto! You had a strong, settled opinion on an issue, without even having to do the reading.

The kind of people who were with us in New Haven in the 80s are now running America. Happily, God plucked Eric out of Celery Green World and taught him which Truths really are black and white. Reading Fish Out of Water won’t just beguile and amuse you. It will help you understand how America got where it is today.