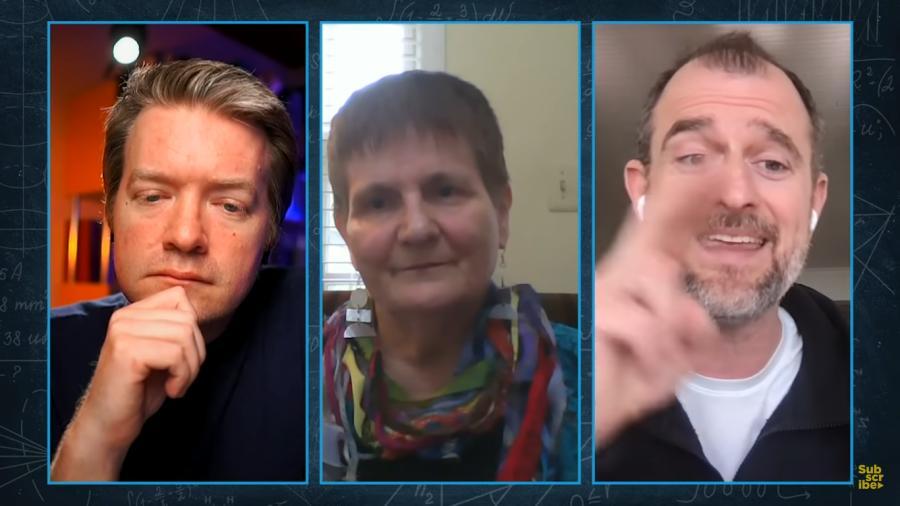 Justin Brierley, Marcia Montenegro, and Todd Wilson on Unbelievable, May 8, 2021

You could feel it all the way through their conversation. Still I was surprised near the end when he came right out and said it. Todd Wilson was on Justin Brierley’s Unbelievable program debating Marcia Montenegro about the controversial personality profile the Enneagram. Wilson proudly calls himself a “Wheaton college evangelical,” while Montenegro’s more of a “fundamentalist.” That’s not “a slur or a critique,” he rushed to add, but it was too late. He’d made his point.

Wilson’s the author of The Enneagram Goes to Church. He’s all in favor of using it, at home, in church, in businesses, everywhere. She’s the co-author of Richard Rohr and the Enneagram Secret, an excellent history and analysis of the purported personality assessment tool. (Full disclosure: I contributed some editing to the book.) She and Don and Joy Veinot explain in that book how and why the Enneagram doesn’t belong in church.

I prefer it when debaters stick to the facts. It was Wilson, though, who descended to, “I don’t mean this as an insult or anything, but really, you’re just a fundamentalist.” He’s not “scared” of using “truth” gleaned from the world, he says, implying that’s her real problem. She’s running on fear, she’s not rational, and she lacks the capacity he’s got for seeing the “wisdom” in the Enneagram.

So he’s the one who dropped it to that level. Fine. Let’s follow his lead, and see where it takes us: Who knows more, he or she? I think that if we can settle that question, we can also settle the question he raised with his book title. Does the Enneagram belong in church?

See How Much Smarter He Is?

She knows it lacks any scientific validity and it has deep roots in New Age and heretical Christian religion. He knows the Enneagram was incredibly insightful for him in learning how to be a better father and leader.

And he also “knows” she just doesn’t understand how, even though it came from occultic roots, Christians can still use the Enneagram. He knows it because he’s of the school that (unlike her, he implies) can accept that all truth is God’s truth. It’s the same school that says Christians can accept what science says about biological evolution.

You can see it in his face, throughout the whole debate: He’s pretty darn sure he’s smarter than she is. I don’t make snap judgments about people’s faces — I know how it backfired when the media did it to Nick Sandmann — but when a man’s words say it, then I’ll believe it when his face also seems to say the same thing.

What Does Scientific Validity Mean?

He acknowledged that the Enneagram hasn’t been scientifically validated — yet. It hasn’t shown up in the best scientific journals so far, he admits, while implying it’s probably just a matter of time. That’s a lot like the way evolutionists do science, too: “We’ll figure out how life created itself, it’s just a matter of time” — while making the same progress the Enneagram is making toward validation: zero.

Montenegro could have pressed him harder on that. She could have asked him to explain, if he knows, what scientific validity means in this context.

He’d already said it was a personality test. That’s a dubious claim. She’d already pointed out that its first purpose was spiritual guidance. Still it’s close enough for now. It purports to be able to say something descriptively true about persons, whether they’re best described as “perfectionist,” “helper,” “enthusiast,” and so on. So here’s where validity comes in.

It’s About Whether There’s Any Reason to Trust It

The technical literature speaks of multiple types of validity: face, construct, discriminant, predictive, etc. That’s all for the specialist. Here’s all you really need to know. It’s the one thing that ties all those meanings together. “Validity” simply means that the instrument measures what it claims to measure, and measures it at least somewhat accurately.

You could also put it this way: A validated test has shown that it’s competent to measure what it claims to measure, and that you can trust its results. It has demonstrated its believability (to a certain defined degree, to be technical about it again).

You’d think that would bother a man who’d put evolution on such a pedestal, but he brushes the science aside. The Enneagram is really a part of the world’s “wisdom tradition.” Science doesn’t matter so much in light of that. Of course, as Montenegro pointed out so well, Christians hardly need look to occult sources from the mid-20th century for our wisdom. It’s foolish. It’s spiritually dangerous.

Amazingly, Wilson brushes that aside, too. He thinks Montenegro knows nothing about the “genetic fallacy,” the logical error that falsely calls a belief wrong just because it came from some bad source. He kept blustering on with it even after she explained the error he was making in it.

And why not? He’s a self-proclaimed “Wheaton college evangelical,” after all. I’m not impressed, especially on this topic. If they teach logical reasoning there as well as they do at Montenegro’s school, Southern Evangelical Seminary, I’ll eat my copy of her book, one page at a time.

He thinks it’s part of some ancient wisdom tradition. She knows in detail (it’s reported in her book) how massively it’s been hyped that way, but that its real history traces back to occult automatic writing practiced in the 50s and 60s. That puts it right around the time of my own birth. I may feel ancient at times — I spent two days in the hospital this week with some really nasty sciatic pain — but not on the scale by which wisdom’s age is measured!

Still, See How Much He Knows

Still he knows. Just look at him and you can tell.

He knows the Enneagram has helped him as a dad and a pastor. Montenegro knows from her own pre-Christian experience how often people say the same sort of thing about astrological readings. Statements like his therefore mean little without facts supporting them.

Wilson knows the Enneagram helped him as a dad and a pastor. She knows that it’s scientifically invalid, so there’s no reason to think it measures what it claims to measure.

He knows that it helped him as a dad and a pastor. She knows its occultic roots.

He knows that it helped him as a dad and a pastor. She knows that virtually everyone who’s advocated the Enneagram credits a known heretical Catholic, Richard Rohr, as one of their main teachers and inspirations.

See how much he knows? He’s quite sure it helped him as a dad and a pastor. And he’s a Wheaton evangelical. Do you see how much she knows? Still, in the end, he contrived to position her as the backward, know-nothing fundamentalist.

I think she could have fended off his bluster more successfully than she did. On the level of facts, though? He was the one who knew very little.