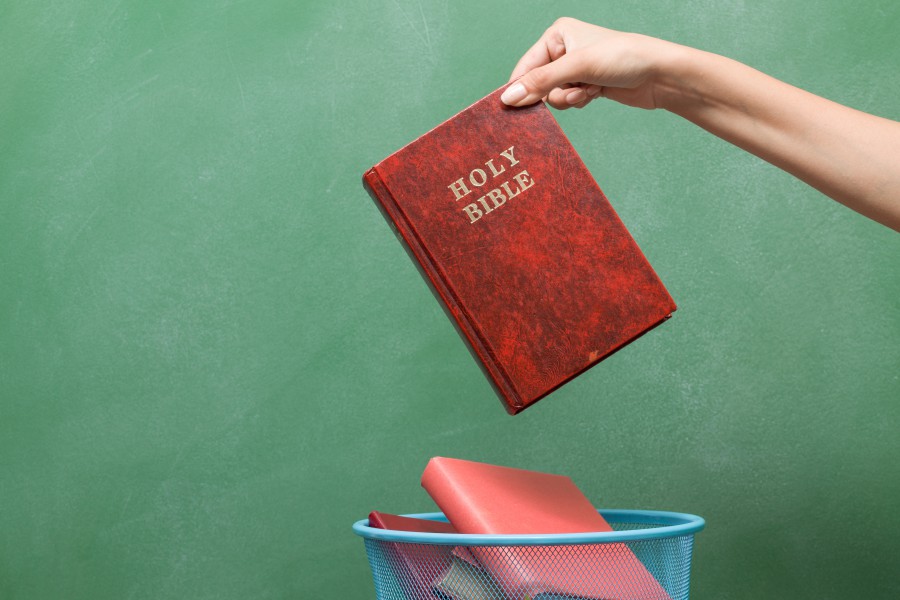 I have met people who claimed to have read the Bible cover to cover and found it wanting, ordinary, and not particularly inspiring, even silly and inferior. I knew an agnostic man named Ted. He made such a claim; I did not believe him. His ignorance of Scripture belied his claim.

If I were banished to a remote and isolated island (the original cancel culture), I would want two books to live out my days: The Bible and The Imitation of Christ by Thomas à Kempis. The second points to the first, and together they will show why Ted was wrong about Scripture.

Kempis’ book begins with a section titled “The imitation of Christ and contempt for the vanities of the world.” He writes:

“Whoever follows Me will not walk in darkness,” says the Lord. These are Christ’s own words by which He exhorts us to imitate His life and His ways, if we truly desire to be enlightened and free from all blindness of heart. Let it then be our main concern to meditate on the life of Jesus Christ.

Then Kempis explains that “whoever has His Spirit will find in His teaching hidden manna.” But even those who often read the Gospel don’t change. This, he says, “is because they do not have the spirit of Christ. If you want to understand Christ words and relish them fully, you must try to conform your entire life to His.”

When someone says he’s read the Bible and got nothing out of it, the problem is not the Bible. The problem is with the reader. The Bible is not just another book. It is the Word of God. The reader must be open to the leading of the Holy Spirit. The Bible cannot be understood by merely reading it, as though it is a novel or history book.

It must be prayerfully read. C.S. Lewis said, “The Bible, when read in the right spirit and with the guidance of good teachers will bring us to Him,” meaning Jesus. The early Christian Jerome said, “Ignorance of Scripture is ignorance of Christ.” Because, as Kempis said, “whoever has His Spirit will find in His teaching hidden manna.”

A reader like Ted the agnostic won’t understand it, because he doesn’t read it to understand. He reads it to reject it.

Ted the agnostic said he found God to be vengeful and cruel. His usual example was to distort his face and imitate an ogre. In a guttural voice he would hiss, “An eye for an eye and a tooth for a tooth.” One day, I asked him where it says that in the Bible? He did not know. It’s Exodus 21.14.

In fact, this passage does not reveal a cruel God exacting vengeance. Quite the contrary. It was instructions for judges that penalties must not exceed the crime. It protected the offender from  retaliation by an injured party, which was often out of proportion to the crime.

A man does not kill the someone who knocked out his tooth. At most he gets to knock out a tooth. This principle of proportionate punishment has guided laws into modern times. It has kept the desire for revenge out of our laws, making them more humane. It is a hidden manna.

I actually don’t believe that people like Ted could have read the Bible without a little voice within convicting them. The writer of Hebrews said, “For the word of God is quick, and powerful, and sharper than any two- edged sword, piercing even to the dividing asunder of soul and spirit, and of the joints and marrow, and is a discerner of the thoughts and intents of the heart.”

This was the problem for Ted and why he was so quick to dismiss the Bible. He did not want to have God’s word penetrate his interior life and convict him of his sin, his thoughts or the intent of his heart. He preferred darkness to light.

The Call to Repent

Somewhere deep inside himself, Ted was afraid of the implications of listening to that little voice. He would be called to repent of things he was not ready to repent of. It was easier and more comfortable to smother the little inner voice (as he had done so often before), silence his conscience, and close the Bible.

So many people have heard the feet of the Hound of Heaven behind them. When they opened Scripture, they heard its pounding paws closing in on them. They had three choices: flight, fight, or surrender.

I hope that in the final moments of Ted’s life he finally surrendered to Christ. The darkness that had covered his life would have become light as he stepped from this life to the next.

It’s not just Ted. We also have denied and defied God at one time or another and tried to silence that nagging little voice. We felt that piercing double-edged sword. We’ve heard the pounding paws of the Hound of Heaven.

Let us do as Thomas à Kempis said: Let us imitate Jesus’s life and His ways, to be enlightened and free from all blindness of heart. Let it then be our main concern to meditate on the life of Jesus Christ. We may then feast on the manna of His Word.

Mark Davis Pickup is a Canadian pro-life activist. You can read more of his thoughts and story at his blog, Human Life Matters. His previous article for The Stream was When MS Attacks the Brain, Let God Renew the Mind.

For more on his life, see Nancy Flory’s profile, Man With Severe MS Walks Again. See also her interview with him about his pro-life work, Fighting Euthanasia.