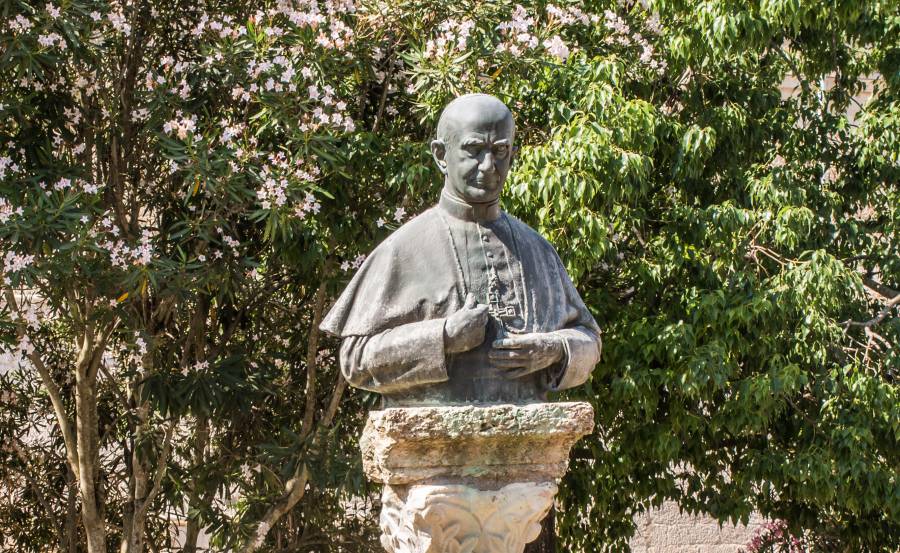 No one remembers Pope Paul VI. He’s the forgotten modern pope. He died 33 years ago, and he served before popes became media rock stars. If non-Catholics know about him at all, they know him as the pope who said no to contraception. He did a lot more than that.

For one thing, he was a saint. A saint is a kind of hero of holiness. (Not guaranteed for popes. Some of them, especially in the Renaissance, holy cow. Dante stuck several in Hell.) Pope Francis declared that today in Rome, as he canonized him with six others. Those others included his friend, the martyred Archbishop of San Salvador, Oscar Romero. (See this article for more on him.)

Paul served as pope from 1963 to 1978. He served the Church through the end of the Second Vatican Council and the first decade of its being put into practice. It was not an easy time to lead the Catholic Church. It was the sixties, remember, and the sixties hit the Church as hard as it hit anything else.

The pope distressed both the secular right and left. His encyclical (a kind of major letter) Humanae Vitae, giving the Church’s teaching on marriage, upset the secular left, and unfortunately many in the Church. He affirmed the Church’s teaching against contraception, when many (for obvious reasons) wanted it overturned. As I say, this is the one thing for which the world remembers him.

Not to Half-Measures, But to Holiness: Pope Francis on Pope Paul VI

Pope Saint Paul VI wrote: “It is indeed in the midst of their distress that our fellow men need to know joy, to hear its song” (Gaudete in Domino). Today Jesus invites us to return to the source of joy, which is the encounter with him, the courageous choice to risk everything to follow him, the satisfaction of leaving something behind in order to embrace his way. The saints have travelled this path.

Paul VI did too, after the example of the Apostle whose name he took. Like him, Paul VI spent his life for Christ’s Gospel, crossing new boundaries and becoming its witness in proclamation and in dialogue, a prophet of a Church turned outwards, looking to those far away and taking care of the poor.

Even in the midst of tiredness and misunderstanding, Paul VI bore witness in a passionate way to the beauty and the joy of following Christ totally. Today he still urges us, together with the Council [the Second Vatican Council] whose wise helmsman he was, to live our common vocation: the universal call to holiness. Not to half measures, but to holiness.

— Pope Francis’s homily for the canonization of St. Paul VI and others

His encyclical Populorum Progressio gave the Church’s teaching on human development, particularly the West’s relation to the developing world. That upset the secular right, and some within the Church.

Here are a few quotes from his writings for those who don’t know much about him. Some are taken from a selection of his writings called Christian Values and Virtues, others from my own reading.

Here is maybe Paul’s most famous line. St. John Paul II quoted it in his Redemptoris Missio and Francis in his Evangelii Gaudium. The line appears in Paul’s 1975 Apostolic Exhortation Evangelii Nuntiandi: “Modern man listens more willingly to witnesses than to teachers, and if he does listen to teachers, it is because they are witnesses.”

He follows this up with “It is therefore primarily by her conduct and by her life that the Church will evangelize the world. In other words, by her living witness of fidelity to the Lord Jesus — the witness of poverty and detachment, of freedom in the face of the powers of this world. In short, the witness of sanctity.”

One thing the pope keeps repeating is that because we know Jesus, we must be happy, joyful, peaceful. “We can enjoy with grateful serenity whatever life has in store for us, even its frequent trials,” he says in one of his papal audiences.

“The Christian is lucky,” he continues. “He knows how to find proofs of the goodness of God in every event, in every aspect of history and experience. He knows that ‘all things work together for good to them that love God.’ The Christian must always show forth his greater security, so that others may see whence derives his serene spiritual superiority: from the joy of Christ.”

“Somebody should tell us, right at the start of our lives, that we are dying,” he says somewhere else. “Then we might live life to the limit, every minute of every day. Do it! I say. Whatever you want to do, do it now! There are only so many tomorrows.”

Paul, the Church and the Poor

Paul often talked about the Church’s and the world’s duty to help the poor and try to eliminate poverty. “Let nobody lack in bread and dignity,” he said before his trip to India in 1964. “May all have the common good as their crowning interest.” He made this personal: “Never reach out your hand unless you’re willing to extend an arm.”

He also connected the pursuit of justice for the poor and of peace. “True peace must be founded upon justice, upon a sense of the intangible dignity of man, upon the recognition of an abiding and happy equality between men, upon the basic principle of human brotherhood, that is, upon the respect and love due to each man, because he is man. The victorious word springs forth: because he is a brother. My brother, our brother.”

More radically, Paul connected concern for the poor with the Church’s teaching on marriage. The first pope to address the United Nations’ general assembly, he told the gathered nations: “You deal here above all with human life, and human life is sacred; no one may dare make an attempt upon it. Respect for life, even with regard to the great problem of the birth rate, must find here in your Assembly its highest affirmation and its most rational defense. Your task is to ensure that there is enough bread on the tables of mankind, and not to encourage an artificial control of births, which would be irrational, in order to diminish the number of guests at the banquet of life.”

By the way, though he never came to America, he kept up with American affairs. He met with Martin Luther King, Jr., in 1964. After their meeting, King reported: “The Pope made it palpably clear that he is a friend of the Negro people, and asked me to tell the American Negroes that he is committed to the cause of civil rights in the United States.”

The World Calls Us to Be Holy

Here’s a final quote, also from Evangelii Nuntiandi: “The world is calling for evangelizers to speak to it of a God whom the evangelists themselves should know and be familiar with as if they could see the invisible. The world calls for and expects from us simplicity of life, the spirit of prayer, charity towards all, especially towards the lowly and the poor, obedience and humility, detachment and self-sacrifice. Without this mark of holiness, our word will have difficulty in touching the heart of modern man. It risks being vain and sterile.”