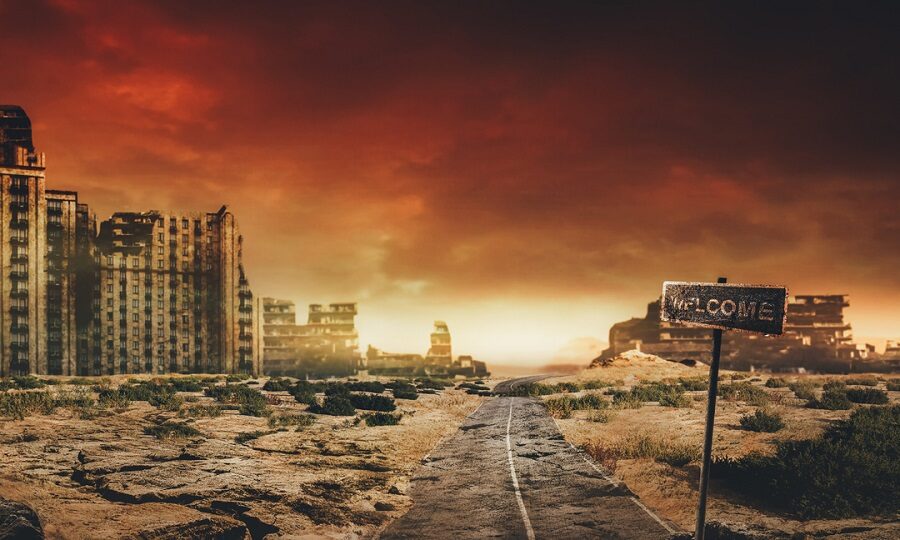 June 3, 2052, New Washington, D.C. Historians gathered today to enjoy a week of fellowship, exchange of perspectives, and gorgeous Appalachian views in our nation’s new capital, formerly Charleston, West Virginia. Some 365 miles away, and little visited due to ongoing fallout, the ruins of the old national seat still gape beneath the sky, the graveyard of millions. It’s little comfort to know that faraway Moscow stands as even more of a ghost town, after punitive U.S. ground burst missiles rendered the region uninhabitable for tens of thousands of years.

The Post-American Historical Society has gathered scholars from every still-inhabitable region of the U.S. to explore a painful question.

The Origins of the Third World War

The keynote address, by visiting Oxford scholar Prof. Bertram Wilberforce Wooster, offered a provocative thesis. “While the question of war guilt still vexes relations between the remaining populations of North America and Eurasia, too few scholars have delved into the specific political history that led up to the conflict. Surviving records from before 2023 are limited, of course. We can only work with a few paper archives, and highly degraded electronic media discovered in cities that escaped nuclear attack. In a sense, it is easier to study the ancient Sumerians than pre-war America,” Wooster admitted.

His fellow scholars were fascinated by records Wooster had unearthed of a major political scandal in the presidency of the last pre-war U.S. leader, Donald Trump. By careful reconstruction of recently restored court records, Wooster has concluded that the tensions which escalated between the one-time “NATO” alliance, the United States, and the Russian Federation need not have ended in a mutually suicidal conflict. “There was an off-ramp on the road to war,” Wooster said. “Alas, it was the road not taken.”

Wooster admits that the relentless drive for expansion by the U.S. and NATO in the wake of the collapse of the Soviet Union in 1991 made such a war always likely. “The world saw on both the putatively antiwar left, and supposedly prudent right, a broad consensus that the West should move in to traditionally Russian spheres of influence.

“While every Russian regime for 500 years had sought to increase a buffer to its west for fear of invasion, Western politicians insisted on stripping that away. They surrounded a shrinking, humiliated, resentful one-time great power with small, weak new countries connected via the NATO treaty to a nuclear hair-trigger. One really must wonder what they were thinking, or if they were thinking at all.”

The Road Not Taken

But this escalating provocation need not have continued, Wooster claims. He adduces campaign statements, policy documents, and other indications that Donald Trump, elected in 2016, sought to deescalate tensions. “Trump did not see the benefit to the United States of an endless confrontation with Russia, particularly as China was both growing economically and rearming itself at a breakneck speed. We have seen, of course, the outcome, in the doubling of Chinese territory since the Russo-American War, and Beijing’s occupation of Japan, Indochina, and the Philippines. None of this, I argue, was inevitable.”

Trump’s basic worldview argued for a rapprochement with Russia, including a negotiated settlement to the very real territorial disputes between that country and “Ukraine,” an independent nation-state whose territory was once home to tens of millions. Of course, it is now mostly empty, irradiated forests, with ghost cities roamed by animals.

The Hoax That Ended the World

“What prevented Trump from acting on his peaceful, patriotic instincts?” Wooster asked rhetorically. “I believe that I’ve found the answer.”

From the patchy, confused remnants we have of records from that period, Wooster has pieced together a fascinating narrative. “During the 2016 presidential campaign, the candidate of the war party, Hillary Clinton, was apparently caught in some grave illegality. We do not have any record of what she apparently did, but it must have been serious. It must have threatened her presidential aspirations. So an attorney for her campaign (we have his name, one ‘Michael Sussmann’) approached the federal law enforcement authorities (the ‘FBI,’ records suggest, though we don’t know what that acronym stands for). Sussmann offered evidence that her opponent, Donald Trump, was a puppet of then Russian leader Vladimir Putin.”

To a fascinated, partly skeptical audience, Wooster unfolded the almost implausible narrative. “It was a highly dodgy, obviously concocted set of charges, apparently. The authorities saw through it immediately. However, since they preferred both Clinton and the war party to the unknown quantity that Trump represented, they pretended to take the charges seriously. All through the campaign, in the hopes of defeating this insurgent outsider.”

A President Crippled by Lies

The most surprising fact Wooster unearthed is that this tawdry campaign trick did not end with the campaign. “The war party, and its allies in the secret surveillance agencies that wielded almost limitless power in the U.S. at the time, kept up the pretense. For almost the entirety of Trump’s four years in office, official agencies and major media outlets continued to recycle a half-baked campaign smear.”

“This had its intended effects. It weakened Trump in office, paralyzed his administration, and most importantly prevented him from working to repair relations with Russia. Instead of resolving Russia’s security concerns about the NATO alliance throttling it, the U.S. continued to blunder down the path to a needless, suicidal war. The subsequent butchery on both sides in Ukraine, the nuclear escalation Biden provoked in 2023 … all of it could have been avoided,” Wooster claimed. “And eighty million Russians, Europeans, and Americans would still be with us.”