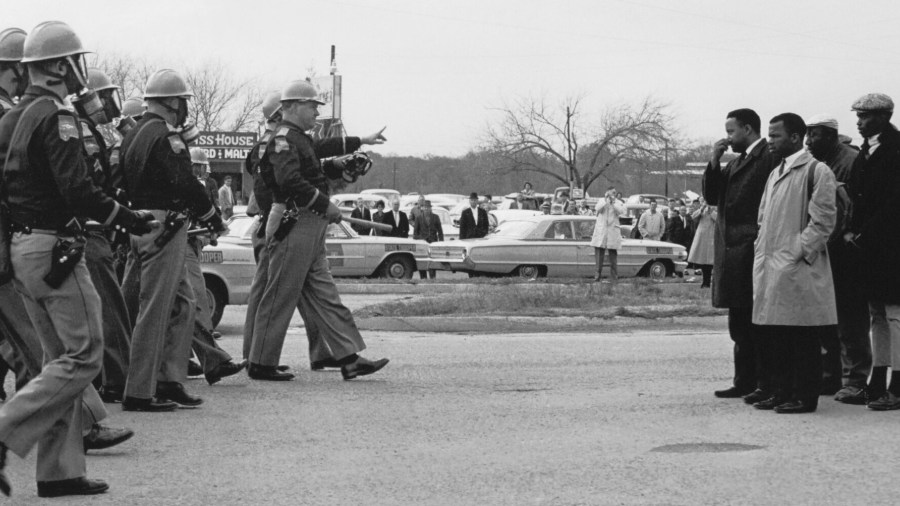 John Lewis, the marcher in the light coat, and Hosea Williams, at front in the dark jacket, led the march from Selma to Montgomery, Alabama, to draw attention to voting rights. Alabama state troopers and local police officers gave the protesters a two-minute warning to stop and turn back. When the protesters refused, the officers tear-gassed and beat them. More than 50 people were hospitalized.

As Americans mourn the recent death of Civil Rights icon, Representative John Lewis, this article will seek to answer an important question. Who beat up then 25-year-old activist John Lewis on Sunday, March 7, 1965 as he led almost 600 marchers across the Edmund Pettus Bridge in Selma, Alabama? Lewis’s beating and that of others shocked America and awakened a nation to their righteous struggle for civil rights.

That Sunday night, roughly 48 million Americans had tuned in to watch ABC’s premier of the Academy Award-winning film “Judgment at Nuremburg.” Surprisingly, the caught-on-camera beating of the marchers in Selma flashed across the black and white television screens in a special news report.

“What kind of people would allow the Holocaust,” was already cogitating in the minds of millions that evening, when suddenly, our bubble of moral superiority was burst by the “Bloody Sunday” broadcast.

I was born in the “solid south” in 1953. That term describes a Democrat dynasty in Southern politics between the years of 1877 to the mid-1960s. After the Civil War and Reconstruction, the Democratic Party became the principal party in the South. The Republican Party was very weak in the land of cotton.

Animosity toward Lincoln’s Republican Party due to the Civil War and postwar enforcement of political and civil rights for blacks during Reconstruction lingered long among Democratic leaders in the South.

Republican candidates were guaranteed to lose in local, state and national elections. Even the popular WWII military general, Dwight Eisenhower, could not win most of the Deep South states in his 1952 and 1956 presidential runs. However, by the end of his second term, Southerners were beginning to switch to the Republican party. Postwar economic prosperity also played a part in this, as the South became more industrial and entrepreneurial.

George Wallace, the 45th governor of Alabama, was a Democrat and staunch segregationist. Two years earlier he had delivered his famous inaugural address, vowing:

In the name of the greatest people that have ever trod this earth, I draw the line in the dust and toss the gauntlet before the feet of tyranny, and I say segregation now, segregation tomorrow, segregation forever.

Gov. Wallace reportedly ordered state troopers “to use whatever measures are necessary to prevent a march” from Selma to the state capital in Montgomery. Film footage shows a line of roughly 25 troopers wearing gas masks approaching the marchers. Chaos ensues as a trooper pokes a nightstick toward Lewis. Lewis would later testify that a state trooper hit him as he tried to shield his head with a hand and was knocked to the ground. Lewis said the trooper hit him again as he tried to pick himself up from the ground. The state trooper who clubbed Lewis was wearing a gas mask. No one has revealed his identity.

However, other marchers (men and women) suffered worse beatings as well as being gassed. Some were struck by deputies on horseback under the authority of Sheriff Jim Clark. Troopers and mounted deputies chased the marchers back across the bridge, using 40 canisters of tear gas along with 12 cans of smoke and 8 cans of nausea gas.

Ambulances picked up injured marchers and transported them to two black hospitals where fifty-six patients were treated. John Lewis had a fractured skull and 18 others were admitted overnight.

The List of Democratic Leaders Responsible for “Bloody Sunday”

Democratic Governor George Wallace — was issuing instructions and orders that day to his Alabama State Troopers. His leadership set the tone and tenor for others.

Albert J. Lingo — the Director of the Alabama Department of Public Safety which is made up of three divisions comprising: Highway Patrol Division, Marine Patrol Division, and the Driver’s License Division, was communicating directly with Gov. Wallace that day and relying information and orders to his Major on the ground in Selma.

Major John Cloud — oversaw the Alabama state troopers in Selma. According the Encyclopedia of Alabama, he was acting on orders from Col. Al Lingo who in turn was communicating with the Governor.

Sheriff James Clark Jr. — was  sheriff of Dallas County, Alabama from 1955 to 1966. Clark was first appointed by Democratic Governor “Big” Jim Folsom after the death of the former sheriff. Folsom and Clark had been friends from their childhood days.

Wilson Baker — oversaw Selma’s City Police and ordered those under his command not to join the troopers and the deputies. He also pleaded with Mayor Smitherman to allow him to try a non-violent strategy before the marchers crossed the bridge. Smitherman denied the request. Mr. Baker is the only “good guy” in this story.

Who Was Really Responsible?

Leaders of the Democratic Party of Alabama must accept responsibility for beating up John Lewis on Bloody Sunday. This party has never apologized for this tragedy. As a whole, this party has never apologized for their role in slavery, the Civil War, Jim Crow laws, segregation, and a host of other wrongs. In fact, they have created two famous myths, “The Lost Cause” and “The Big Switch” to shift the blame onto Republicans.

Ron F. Hale is a freelance writer, interim pastor, and has written a chapter in the newly released book, The Right to Believe, published by Vide Press.