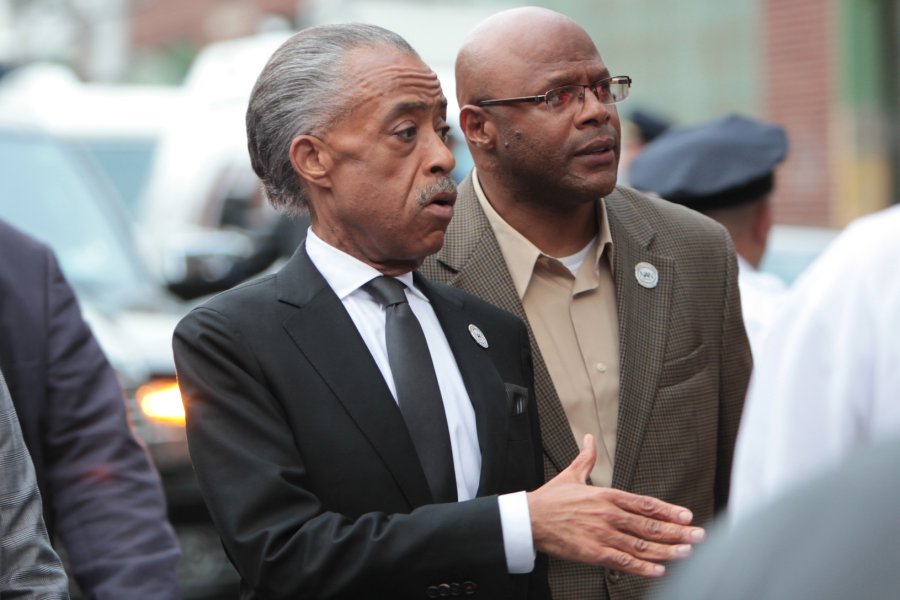 The Rev. Al Sharpton at the funeral of Staten Island resident Eric Garner, an African American man who died after NYPD officers held him in a choke hold while arresting him.

And the importance of their faith to keeping our politics sane. The African-American base of the Democratic Party is the one thing keeping the party from being full-on communist, or wherever white liberals are headed. On Super Tuesday, they saved the party. As Peggy Noonan observed, “It was something — a turning of the tables, a doing what others up North and out West couldn’t quite do, and that was saying, ‘We are not socialists, we’re Democrats.’”

But Dionne can’t stop there.

And really, isn’t that the general theme of what we are seeing from so much of our white liberal friends and relatives in our news feeds this past month? For many white liberals, it’s not really about helping black people. It’s about telling other white people that they occupy a loftier moral plane than others (like conservatives).

But let’s come back to Dionne’s column. He says that African-American Christianity is good because it’s about justice for the oppressed. He invokes lots of biblical references (the prophet Amos, etc.) to make this point.  White evangelical Christianity is bad because it’s conservative and its adherents support Trump.

Dionne is a Catholic, albeit a liberal one. Has the man never heard of the pro-life movement? Is he even pro-life himself? I’ve never known him to write a single word in defense of the unborn.

I mention this because the pro-life movement is the example par excellence of a mostly white conservative Christianity that is about justice, that does read all of Dionne’s Scriptural references the same way the African-American church does.

That is why the late Fr. Richard John Neuhaus, who worked with Martin Luther King, could rightly point to the pro-life movement as a natural successor to MLK’s civil rights movement.

And that is why pro-life Christians voted for Trump. From that very same Biblical tradition of social justice that Dionne claims we lack. They voted for Trump out of a passionate desire for justice to the unborn.

None of which, by the way, is to deny Trump’s flaws. It’s not to deny the weaknesses of our movement. Some of our people have responded to the challenges of racism badly, without the sympathy that should mark pro-lifers. They have not spoken in keeping with the noble lineage etched out by Fr. Neuhaus and upheld today by figures like Robert P. George.

But pro-lifers at least have a vigorous (indeed, at times all-consuming) tradition of self-criticism. We correct our mistakes. White liberals, not so much. Their self-criticisms aren’t really aimed at the self. Theirs are more in the nature of the “humble brag,” the thing that means its opposite.

Their confessions of “white privilege” are really confessions of their own virtue, of their superiority over other white people who are not as morally wise as them. That is what it is all about for them. For white liberals, the pain of African-Americans is really just a means toward that end (and many others).

A superficial focus on discrimination is how some affluent liberal whites maintain their power. It gives them cover with the Left. It keeps the woke mob from noticing that their wealthy allies benefit from growing income inequality. As Rob Henderson wrote in the New York Post, “Upper-class whites gain status by talking about their high status. When laws are enacted to combat white privilege, it won’t be the privileged whites who are harmed. Poor whites will bear the brunt.”

Never is the hypocrisy of it more obvious than when they cite Al Sharpton against us, as Dionne does. No single leader of the African-American community has done more harm to Martin Luther King’s legacy in my lifetime than Al Sharpton.

King responded to racism with a vision of the beloved community that we can all support. Sharpton turned the cause into a shakedown operation that, in some cases, led to deaths or ruined lives.

Reading for the Counter-Revolution