(And Other Adventures in Missing the Point)

As COP21 diplomats huddled in Paris, whitehouse.gov promised to show “why we have to act on climate now — in one chart.” An ominous red line bending sharply upwards was labeled “Global Temperature.” Big problem — it’s not. If you are going to claim to explain a complex issue in one graphic, you had better get your graphic right. 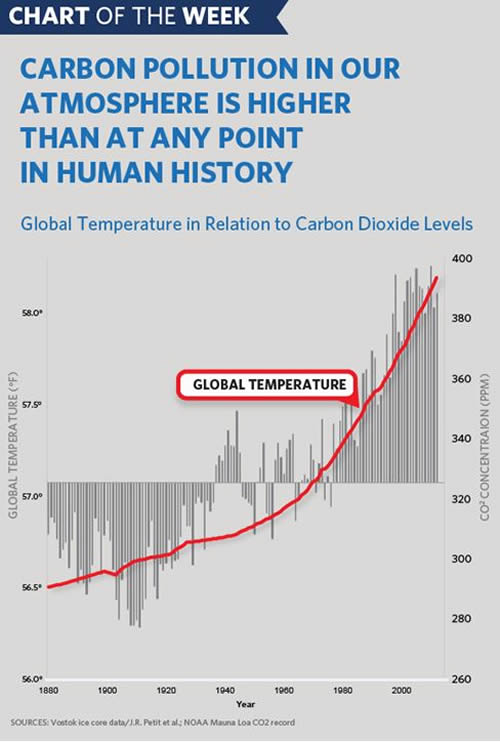 The red line the West Wing mislabeled is actually the atmosphere’s rising level of carbon dioxide (CO2). The bars, behaving a bit more erratically — though certainly trending upward in the past half century — represent the temperature year to year. Also, it isn’t obvious why the degree and a half of temperature rise over the past 135 years represents something dangerous. Such may well be the case, but that is not intuitively obvious to the casual observer. This chart (now corrected a week after it had top billing) is far from all you need to know to decide whether action on climate is required now.

Yet, the White House Director of Digital Rapid Response for the Office of Digital Strategy (now there’s a title) is not alone in the work of oversimplification. Many people on all sides of this debate can be too quick with their rapid responses to the quandary of climate change. Senator Ted Cruz orchestrated a congressional hearing to counter the Paris talks and was quick to go for his own emotion-inducing visuals of questionable value. He had no faulty red lines but he started things off with a picture of a ship stuck in Antarctic ice, which he oddly juxtaposed against a quote from John Kerry predicting (incorrectly) that summers at the other end of the world would be ice-free in 2013. Well, the Arctic is not the Antarctic, as our friends on the left were quick to point out. (By the way, the ice trend line at the North Pole is decidedly downward, but it will still probably be a while before Santa’s workshop goes underwater.) Cruz’s stunt seemed primarily designed to help those already pre-disposed to ridicule climate change alarmism — a sizable slice of the GOP electorate — to laugh a little louder.

A few weeks ago, Cruz gave another set of opening remarks to an Austin gathering of just that chuckling sort — those often pejoratively mislabeled as climate change “deniers.” Deep in the heart of Texas, though, no one was denying that climate changes, but CO2 was often glowingly described as “the gas of life.” There is indeed some truth to this, but one cannot simply end the discussion by declaring that “CO2 is not a pollutant.” Water is the liquid of life, but put H2O in the wrong places (say, your lungs) and at the wrong concentrations and you will still drown.

There can be too much of a good thing. Deciphering whether we have reached that point with CO2 is a complicated proposition, and oversimplified graphics or labels like “carbon pollution” or “gas of life” may help to rev up the tribes for battle, but they do little to foster thoughtful discernment. The real question is not if the world has ever been warmer (it has) or if the atmosphere has ever had more CO2 (ditto) but whether our modern tilting of the previously balanced carbon cycle is wise stewardship. Are natural ecosystems and human civilization now endangered by a rate of change rapid enough to be culturally and ecologically destabilizing? A valid follow-up is asking just how destabilizing the proposed “solutions” will be.

One thing not in dispute is that the people of the world have transformed massive quantities of underground carbon (coal, oil and natural gas) into atmospheric CO2, a known greenhouse gas. And, as the consistent rise on the (properly labeled) graph illustrates, once it’s there in the air, CO2 sticks around a long time. Just exactly how much it will warm things (given uncertainties surrounding various secondary effects and feedback loops) and what should be done about it are topics validly open to debate.

The massive amount of energy released in association with the Industrial and Information revolutions has empowered a lot of good (and bad) — everything from the polio vaccine to internet porn. We are now struggling to understand whether all this comes with a big and completely unintended consequence: global warming. Side-effects can sometimes be positive, though. The understudied “fertilizer effect” of CO2 may be a big plus for certain farmers and forests. But those plants won’t grow in saltwater no matter how much CO2 there is in the air, and rising sea levels could bring other complications to a world population that has pressed itself in along the coasts.

Effectively hacking our way through the thicket of climate change rhetoric will require leaders that can move us beyond slogans and embrace uncomfortable realities head on. In a political age of demagoguery and oversimplification, it is hard to find the civic conversation skills needed to avoid either just vilifying CO2 as “carbon pollution” or lionizing it as “the gas of life.” But on we must go, and the non-binding accord reached in Paris is by no means the end of the story. It is time to move past clichés to the hard work of assessing our real risks and charting the best path forward.

John Murdock worked in Washington, D.C. as a natural resources attorney and now writes from his native Texas. He helps direct the Earth Stewardship Alliance and exists online at johnmurdock.org.