Why are Progressives so deathly afraid of the free marketplace of ideas? 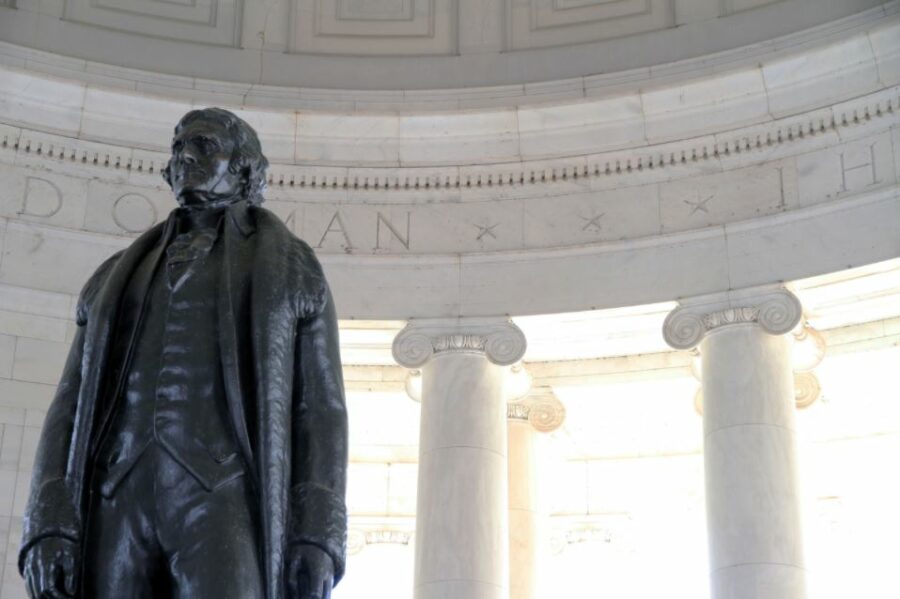 Ensconced among the cherry trees ringing the Tidal Basin in Washington, D.C., rests the Jefferson Memorial. The rotunda of this stately edifice shelters a statue of the great man. Among his many inscriptions adorning the walls are these words:

I have sworn upon the altar of God eternal hostility against every form of tyranny over the mind of man.

With a craven cancel culture now in full sway, one can only wonder what the man who crafted the Declaration of Independence might say about it. Perhaps he would rehearse the Declaration’s self-evident truths:

That we are endowed by our Creator with certain unalienable rights; that among these are life, liberty, and the pursuit of happiness.

Well, apparently what the Lord giveth the Lifetime Network taketh away. After nearly three years of Lifetime airing our weekly Truths That Transform television program — one in which we apply Biblical truths to the great moral, ethical, and cultural question of our day — officials at Lifetime have suddenly decided our program content is too “controversial,” forcing us off their network.

At the same time the Lifetime Channel is giving us the back of their hand, we received reports from others in the community of Christian broadcasters that other major cable television channels and networks are cancelling entire blocks of religious programming. This is the new face of corporate responsibility in America — viewpoint discrimination and outright censorship.

This spitting in the face of those with viewpoints differing from the new woke orthodoxy by broadcast and cable television is bad enough, but it gets worse. Others providing business services to those holding non-favored viewpoints are falling all over each other to demonstrate their woke bonafides, by denying services to those with the heretical temerity to hold views diverging from those permissible under Progressive woke-ism.

Witness the good folks at wannabe-gatekeeper Mail Chimp, the simian-friendly email platform whose Standard Terms of Use were recently modified to include this language:

Mailchimp does not allow the distribution of Content that is, in our sole discretion, materially false, inaccurate, or misleading in a way that could deceive or confuse others about important events, topics, or circumstances.

How Mail Chimp is singularly qualified to adjudicate matters of truth or falsity across a wide range of cultural issues escapes the notice of most neutral observers. But herein lies the genius of Progressive thinkers: If the viewpoint in question is different than ours, it must be false. Case closed.

Or witness the noble work of the enlightened folks at Wells Fargo in forcibly closing the financial accounts of people highly visible in the conservative and Christian landscape. Or California-based Logix Federal Credit Union refusing accounts to people even doing business with religious organizations. Naturally, the elephant-in-the-room question is: When will woke financial institutions begin targeting the supporters of Christian and conservative organizations?

In a Biblical context, many are familiar with the predictive prophecy that restricts buying and selling to those with “the mark of the beast.” What we see emerging today is a secular version in reverse order. Instead of everyone having the mark, those with disfavored viewpoints and ideals are anointed with a latter-day scarlet letter. More like the “No soup for you” pronouncements from Seinfeld’s Soup Nazi.

However it’s characterized, at base the progressive cancel culture is less about deplatforming extreme ideas and more about persecuting people with whom they disagree. Their aim is not correction but destruction. If the Southern Poverty Law Center were true to their own disingenuous and defamatory definition of hate, they would have to include two-thirds of the Progressive left (and themselves!) on their infamous map. Today’s Progressives more resemble Orwell’s dystopian epic 1984, where Winston Smith, who was outed as non-conforming, is brainwashed back to Oceanian orthodoxy and awaits his execution.

One might argue that the foundational question here is: Why are Progressives so deathly afraid of the free marketplace of ideas? They are in urgent need of reading — perhaps for the first time — John Milton’s Areopagitica. In his polemic against the state-sponsored cancel culture of his day, this Puritan(!) declared: “Let [Truth] and Falsehood grapple; who ever knew Truth put to the worse, in a free and open encounter?”

Milton argued that the best defense of freedom of speech and expression was the debate and discussion of ideas — where good ideas would tend to rise and bad ideas to fall. Perhaps the cancel culture is a latent acknowledgement that Progressive ideas suffer under the weight of scrutiny.

Whatever the case, it’s self-evident that the solitary idea nearest to the Progressive heart is to make sure nobody hears your ideas. This is nothing less than Jefferson’s “tyranny over the mind of man.” For those who understand how hard-won freedom actually is, we too must swear eternal hostility against the efforts of those who would steal it.