When Truth Causes a Riot 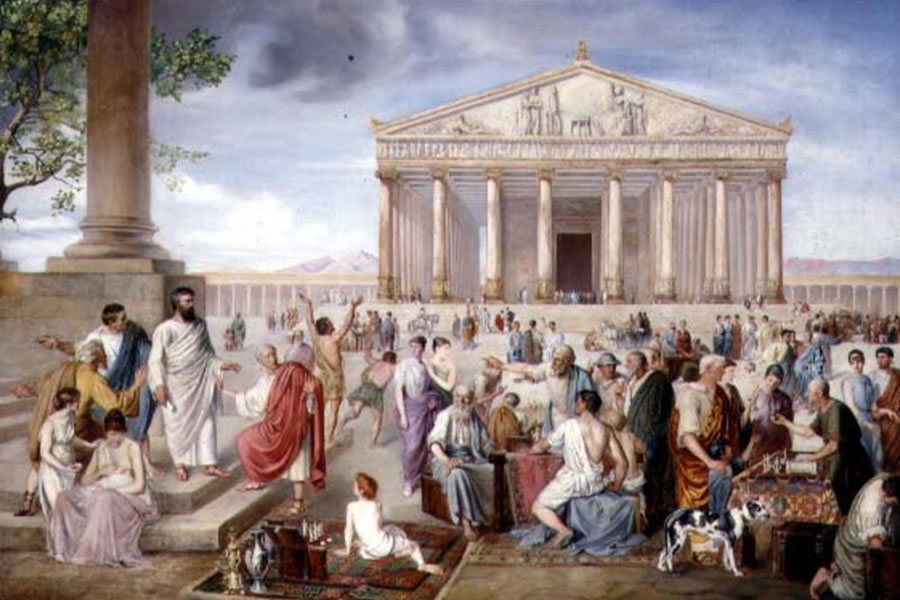 "St. Paul Preaching Before the Temple of Diana at Ephesus" by Adolf Pirsch. Oil on canvas, 1885.

By Annemarie McLean Published on October 6, 2020 •

Interested in taking a deep-dive into the topic of public riots? Me neither. Nevertheless, we’ve sure had our fair share of them this year.

For many of us, scenes of burning cars, toppled statues, smashed storefront windows, and blatant attacks on law enforcement officers have left us feeling bewildered and asking ourselves, “Umm…what did I just watch?”

As we dig a little deeper, perhaps the underlying question is “Why do riots happen?” Are they just products of happenstance? Or is there far more that goes on behind the scenes to bring people to a place of participating in a “noisy, violent public disorder caused by a group or crowd of persons” that is “a disturbance of the public peace in a disrupting and tumultuous manner in carrying out their private purposes”?

Did the dictionary’s definition of a riot just tip us off? Did it imply that riots actually don’t “just happen,” but are in fact, many times set off by a group “carrying out their private purposes”? Is there, oftentimes, an underlying group that is feeling cheated, unheard, or even betrayed? Obviously “yes,” but are there even more insidious reasons that purposefully attempt to induce rioting? Like ones that want to quell the truth to profit off a lie? Look no further than a riot that engulfed the city of ancient Ephesus, as told in Acts 19.

Apostle Paul and the Temple of Artemis

Paul was just doing what Paul did: preaching the Gospel. Paul probably would have agreed that preaching the Gospel unapologetically in Ephesus would bring him into near-guaranteed conflict. He knew full well that Ephesus was home to The Temple of Artemis (or Diana), one of the Seven Wonders of the World at the time. Pilgrims from all over would come to see what Pliny the Elder described as “the most wonderful monument of Grecian magnificence.”

Cult-like worship of Diana had become big business for the seaside city, and shrewd businessmen capitalized off the built-in money-making opportunities found there. One of these businessmen was Demetrius, a silversmith who made shrines of Artemis and “brought no little business to the craftsmen” (Acts 19:24).

With this backdrop in mind, soon “there arose no little disturbance about the Way” (Acts 19:23) and Demetrius was spearheading it. He had figured out: A) The preaching of the Gospel turned people away from idol worship and, B) When people turned away from idol worship, they no longer needed what Demetrius and his clan of craftsmen were selling, regardless of the fact that his entire business model was built on perpetuating a lie.

What followed next is a five-step “recipe for a riot”:

Demetrius brought together disgruntled and discontented men like himself, rallying them around a message that fed their unmet desires and stoked their worst fears. He ignited a common goal of shutting down The Way by appealing to the preservation of their shared profiteering off Diana worship (Acts 19:25).

Vilify Truth as a Dangerous Threat

The next ingredient for inciting a riot is identifying the “blame group.” Ironically, Demetrius used the mainstream media of his day — word of mouth — to accomplish this critical step in the process. He said, “You see and hear that not only in Ephesus but in almost all of Asia this Paul has persuaded and turned away a great many people, saying that gods made with hands are not gods” (Acts 19:26, my emphasis added). Fact, truth. And one they couldn’t handle.

From there he added fuel to the fire with phrases like “there is danger,” “this trade of ours may come into disrepute,” and “the temple of our great goddess Artemis may be counted as nothing.” In his final statement, Demetrius seals his manipulation of public opinion by implying that the truth and power of the Gospel threatens to depose Artemis from her magnificence, “she whom all Asia and the world worship.” That was it. The fury of the mob had been ignited.

Get the Public on Board With Propaganda

Here’s where the story pivots. From this point on, we don’t hear anything more about Demetrius and his economic doomsday message. He had successfully protected his real idol (love of money) with a front message rooted in a false, but widely-held belief. The mantra was now the incessant cry of “Great is Artemis of the Ephesians,” an easy sell to a gullible public who prided themselves and their city in their own glorious “Artemis Ephesia.” The growing crowd embraced and spread the slogan, unaware that they were actually public pawns for the special-interest group of silversmiths who had much to gain from their outcry.

Create Space for an Atmosphere of Confusion

With emotions running high, the growing group of rioters spilled into the streets and rushed into the amphitheater, dragging with them two of Paul’s traveling companions. Now with plenty of space in the amphitheater, confusion reigned. “Some cried out one thing, some another.” The message was now convoluted and compromised and that was the point. Mixed messaging and confusion go hand-in-hand so that “most of them did not know why they had come together” (Acts 19:32).

Crazy what happens next. Some of the crowd put forth Alexander, who was a Jew, to make a defense to the crowd (19:33). “But when they recognized that he was a Jew, for about two hours they all cried out with one voice, ‘Great is Artemis of the Ephesians!’” Paraphrasing, it’s as if they said, “Get him off the stage! He’s Jewish. No matter what he says, we are not listening to him.”

Finally, the town clerk placates the crowd by agreeing with their deception. He said, “Men of Ephesus, who is there who does not know that the city of the Ephesians is temple keeper of the great Artemis and of the sacred stone that fell from the sky? Seeing that these things cannot be denied, you ought to be quiet and do nothing rash” (19:36-37).

Seeing that what things can’t be denied? Things like a sacred stone falling from the sky? Last I checked, Artemis is enshrined only in Greek mythology.

When agreeing with deception is the only way to quell the crowd and disperse a riot, societally speaking we are in grave danger of unknown proportions. Even now, we are confronting various Demetrius-types all over our culture as we watch history repeat itself. Certain voices in the media, government, medicine, education and entertainment all have much to lose if we lose faith in their false gods, and much to gain if they follow this recipe for a riot.

As we continue not to buy into what they’re selling, let us stand firm in the faith. Even if that faith is falsely accused of inciting a riot.

The World Lies. A Lesson in Public Relations