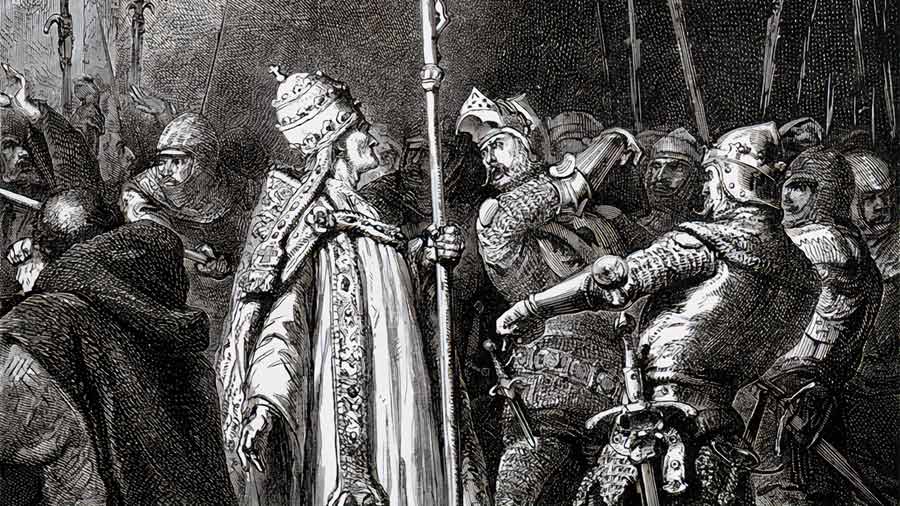 As we study Western history, we see again and again the Church confronting the State. It starts with the Romans persecuting the early Church. It’s easy for us to pick sides there. Then, heretical emperors who doubted Christ’s divinity tried to force Arianism on bishops and popes. Again, a no-brainer. But as the centuries wear on, the reality gets more complex.

If you’re a young Catholic as I was when studying history (even at a secular school like Yale), you find it comes naturally to side with the Church (or rather, the men leading the Church) on every occasion. When popes clash with Holy Roman emperors, or kings of France or England … you lean toward the Church.

Of course you have some good reasons. You’re glad that the western Church never got so thoroughly subjugated as the Byzantine patriarchs, that popes retain independence. And on most of the issues, at least at first, the popes are right. You don’t want the bishops picked by secular kings for political reasons. That was what split Gregory VII from Emperor Henry II.

But you need to remember something, which is easy to forget. Those kings were Christians, too. They had responsibilities proper to their office which they owed to God to fulfill. Yes, churchmen can speak with authority on matters of faith and morals. But that doesn’t mean they always do so correctly.

Clergymen Are Fallen Men Too

They might, for instance, launch a crusade that’s a bad idea. They might demand privileges for the clergy that exceed what is just or prudent. The great conflict between France’s Philip the Fair and Pope Boniface VIII was over … the clergy wanting their vast feudal estates to remain free of taxes. Is it obvious from the Bible or basic Christian principles that they should have that exemption? No, it isn’t.

Clergymen, being men and as thoroughly fallen as anyone else, can overreach their rights. They can abuse their power. They can pretend that their war to seize some extra land for the Papal States from Florence or Pisa is a holy crusade. And Christian laymen, including kings, in such cases owe it to God to defy those unjust decrees. No less a Catholic hero than the poet Dante believed that the popes had become too obsessed with their temporal power, and ruined Italy. He hoped a pious emperor would bring their power to heel.

An Established Church in America?

Let’s shift from Europe to America. Some Anglican clergy wanted King George III to appoint American bishops, and use the royal power to corral all Protestants into the Church of England. The threat that this might happen was one of the leading causes of the American Revolution. In that case, state officials (our fathers) were pushing back against churchmen. Likewise when states like Massachusetts angered Congregationalist leaders, by disestablishing them as the “official” churches of those states.

Reckless clerical Utopianism exploded like a slow-motion piñata with the election of Pope Francis.

The Papal States disappeared with the unification of Italy in 1870. That had mixed effects for Catholics. On the one hand it freed us from having to sift out which papal decrees and demands proceeded from timeless moral principles. (And which just suited the pope as an Italian power-player.)

The Papal States Gave Popes Skin in the Game

But negative side-effects emerged, many decades later. Back before 1870, when the popes had to govern territory, keep public order, punish criminals and suppress acts of terrorism, those responsibilities kept them grounded, with both feet on earth. No pope could embrace reckless, Utopian political or economic programs, and try to impose them on Christians around the world.

Popes who commanded armies, hanged bandits, and restricted immigration could never teach pacifism, denounce capital punishment, or call for open borders. Their own real-world responsibilities as rulers precluded them from grabbing one single thread from the Christian tapestry, and running with it over the Gadarene cliff, unraveling centuries of balanced thinking. 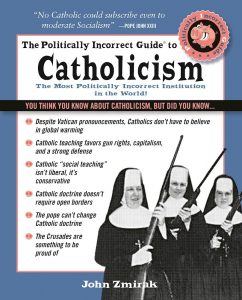 But now the pope’s territory consists of a couple of palaces, a few museums, and a gift shop. He relies for public order on the Italian government, and indirectly on NATO and the U.S. So things are different.

With Pope Paul VI especially, we saw popes take peace, order, and prosperity for granted — as if they were laws of nature, rather than the difficult achievements of statesmen and citizens. In other words, on various issues, they started acting like high-minded, spoiled Woke college students. Or cosseted elitists in rich blue zip codes, swathed by thick layers of money from any side-effects of their political prescriptions. That was for working class and poor folks to suffer.

In other words, popes ceased to speak as statesman to statesmen, weighing costs and benefits, balancing the claims of various interest groups, and keeping in tension both rights and responsibilities. Instead, the statements of popes (and with them, of other clergymen, on either side of the Tiber) began to resemble secular liberal wish lists, or even the programs of revolutionary movements.

How the Vatican Turned into a Woke NGO

This movement started with Pope Paul pontificating in Popolorum Progressio that the right solution to global poverty was … massive foreign aid, from Western taxpayers to third world governments. (That turned out to be a disaster, as conservative laymen had quickly predicted, doing little but flood the Swiss bank accounts of African dictators in leopard skin hats.)

Next came John Paul II’s unfounded speculation that capital punishment was no longer necessary, thanks to our advances in criminology. In his evolving reflections on a doctrine settled since the Covenant of Noah, John Paul simply left out the primary rationale for capital punishment. He dropped any mention of imposing justice on the worst of evildoers. (Such as the Nuremburg war criminals, whom Pius XII had urged be quickly hanged.) Instead, John Paul kept only the utilitarian argument about social self-defense. So the central argument from justice dropped out of most Christian debates over the topic, down the Memory Hole. We were left sounding like utilitarian hedonists.

Still worse was Pope Benedict XVI’s woolly-headed assertion that our planet needs a planetary government — in order to contain financial abuses and put an end to wars. No one inside the Vatican apparently thought to remind the pope that competition among governments worldwide helps serve as a brake on tyranny. Nor that the most likely global regime that might emerge would be a dictatorship from which there would be no exile, no escape. Except into outer space. (“Help me, Obi-Wan, you’re my only hope!”)

Reckless clerical Utopianism exploded like a slow-motion piñata with the election of Pope Francis, whose ideological alignment with globalist elites and the radical left I’ll examine next time, in contrast to the wise Christian statesmanship of Hungarian leader Viktor Orban.