It’s been hard to get a good read on the politics of the Dobbs decision, which overturned Roe v. Wade. We applaud the decision, and for good reason. There is not, and never has been, a constitutional right to abortion.

But does the decision help Democrats going into the midterms? Progressives see Dobbs as the removal of a constitutional right. Anger can get folks to the polls. Midterm elections are notoriously decided by the enthusiasm level of each party’s base, since overall turnout tends to be lower.

So how might the Roe decision impact midterm voting this November? It seems to depend on who you’re listening to. This stuff is so emotional that we tend to live in echo chambers. That’s why the just-released Harvard-Harris poll is helpful. Harris is a respected polling outfit. Its chairman is Mark Penn. Maybe you’re thinking, wasn’t Penn the chief strategist and pollster in the Hillary Clinton 2008 presidential run? Yes, he was. But he later became a defender of President Trump, opposed his first impeachment, consulted on his presidential campaign, and alleged a deep state conspiracy against him.

There’s lots of stuff in the poll, but let’s focus on Roe v. Wade. Just over half the country opposes the recent SCOTUS decision. Notice how the question accurately portrayed the outcome’s import: It sends the decision on abortion standards back to the states. 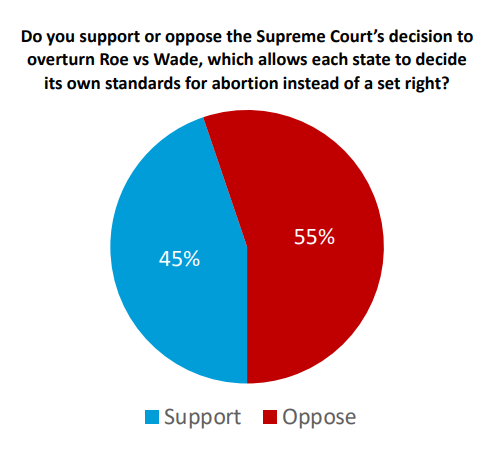 There was stronger opposition from women than men: 61% vs. 48%. Younger adults were more likely to oppose than older cohorts.

But don’t read too much into that one response. A majority of voters both expect restrictions on abortion rights — and welcome that. The question on the left asks what respondents think should happen. The one on the right asks what they think will happen. Let’s focus entirely on the should part.

Now go up one more. Over 7 in 10 (72%) support an abortion ban beyond 15 weeks, including an exception for rape and incest. This is something the GOP is considering for the next Congress. The remaining 28% want more access to abortion. But only 10% want access to abortion throughout the entire pregnancy.

Let’s break it down by party and gender:

Just look at that support for no abortion beyond 15 weeks: 60% Dem, 84% GOP, and 70% of independents/other. Only 40% of Democrats want abortion beyond 23 weeks. It’s also intriguing that while 61% of women opposed the SCOTUS overruling of Roe, there’s greater support from women on restricting abortion to earlier in the pregnancy.

Again, lots of opposition to abortion beyond 15 weeks.

The irony is that Democrats had a chance, and still do, to codify abortion rights into federal law. Now — while they still control the House, Senate, and Presidency. HR 3755 passed the House and was rejected 49-51 in the Senate. It was supported by every Senate Democrat except Joe Manchin. No Republican supported it — even though Senators Murkowski (R-Alaska) and Collins (R-Maine) are pro-choice. Why? Because HR 3755 would have permitted abortion for all 9 months of pregnancy.

The 49-51 Senate vote makes it sound closer than it was. The bill actually needed a filibuster-proof majority. That said, the filibuster hangs by a two-vote thread in the Senate. President Biden is also in favor of nixing the filibuster to codify abortion rights.

The Dems could still strike a deal with Murkowski and Collins by limiting abortion rights to early in the pregnancy. But that would cost them votes from more progressive officials.

On the one hand, we dodged a bullet with HR 3755. On the other hand, the bill on which democratic leaders forced every member in both chambers to vote — that bill only has the support of 10-20% of Americans (depending on which poll you go with). It was a strategic (and blessed!) blunder. There’s a real danger that Democrats are overreaching by going into November advocating for full, 9-month abortion rights.

The Matter Returns to the States

Maybe it’s just as well for Democrats that HR 3755 fell short. According to the Harvard-Harris poll, only 31% want abortion standards decided by Congress. A much larger group (44%) prefer that state legislatures decide. 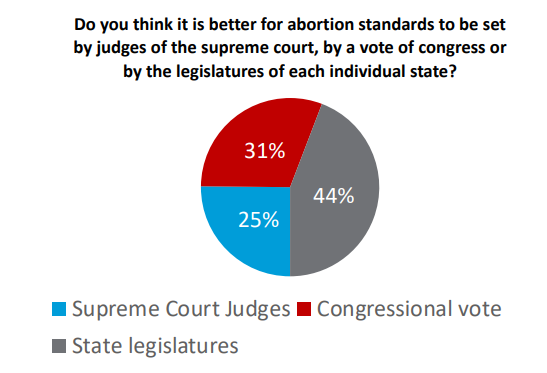 You could also make the case that there’s strong support for a 15-week federal abortion ban. Both the Harvard-Harris and Economist/YouGov polls make it clear that Americans are uncomfortable with abortion beyond 15 weeks. If the GOP campaigns on such a ban, and wins the House and Senate, it becomes a no-brainer to pass a bill. You’re just doing what you said you’d do. President Biden would cast a veto. So be it. That puts Biden on the record and it becomes a 2024 issue.

All that said, the battle for now is at the state level. The public seems to be okay with that.

Let’s end with the original question. How might the Roe decision impact midterm voting this November? The answer seems to be … it won’t. 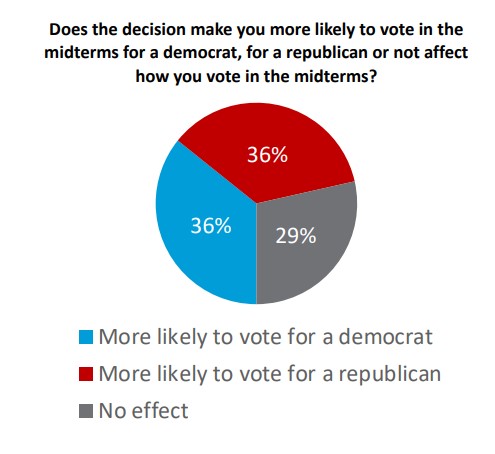 President Biden seems to be hoping it helps his party. But this says it’s a net zero. Inflation? Economic concerns? That’s a whole different picture.