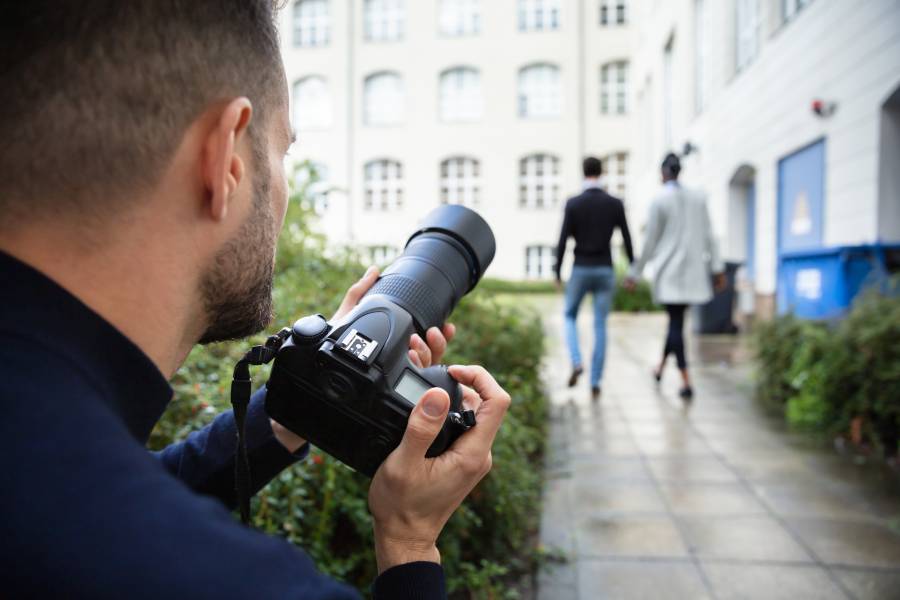 Look at what they’re doing now:  Chasing Donald J. Trump with the same single-focus zeal paparazzi used to chase Trump around Manhattan back in the day. And they’re doing it on our dime and on our time.

What else could you call this impeachment farce but celebrity stalking? Impeachment is supposed to be used to remove an official from office. President Donald Trump is no longer in office. Yet Democrats are hunting Trump down at Mar-a-Lago like the tabloids hunted Trump’s first wife and mistress on the slopes of Aspen.

This “impeachment” is not serious. It is not fit for the halls of congress. It’s fodder for the grocery store check-out line.

When the United States Congress should be worried about the DMZ, it’s acting more like TMZ. Acting like the National Enquirer rather than acting in the national interest.

Donald Trump is a private citizen. But he’s still the Big Get.

Like any sleazy tabloid, let’s make up a story about the world’s biggest celebrity. We’ll draw lots of eyes, with no worries about accountability. You know the drill: Taylor Swift was at the mall. Zac Efron was at the mall. Taylor and Zac are engaged and at the mall shopping for wedding rings.

The Globe and The Star have nothing on the House and the Senate.

Scheming on Trump Because They Can’t Sell Their Ideas

In a blistering speech Tuesday from the Senate floor, Sen. Rand Paul diagnosed why Democrats are more TMZ-boss Harvey Levin than Henry Clay.

Said Sen. Paul, “It’s almost as if they have no ability to exist except in opposition to Donald Trump. Without him as their boogie-man, they might have to legislate and to actually convince Americans that their policy prescriptions are the right ones.”

If Democrats focus on the Orange Man Bad tabloid figure, maybe Americans won’t notice that gas prices are surging; jobs are already being eliminated by the thousands; the proposed federal minimum wage increase will kill a million more jobs; Chinese bombers fly over Taiwan; boys the size of buses can compete in girls sports if they decide to identify as female.

Spray in great big font “Impeach! Impeach” on news rags and perhaps Americans won’t notice that leftist violence is raging in the northwest. That an insulin price reduction has been dumped. That all illegal immigrants held by ICE — including criminals — have been ordered released onto the streets. That Trump had already beaten Biden’s goal of 1 million vaccines a day. That Biden’s reversed himself and said nothing can be done about the trajectory of COVID.

That Joe Biden is signing executive orders at a manic unprecedented pace, even if he admits he doesn’t know what he’s signing. And doing so only months after saying a president who uses executive orders rather than the legislative process is a “dictator.” Yes, as RedState noted, Joe Biden — by the standard he himself set in an October townhall — is a dictator.

What is Being Missed This Time?

The Senate can do no other business while the impeachment trial lasts. One can argue this is a good thing. The less time the Democrat-controlled Senate works on legislation the less time they are doing damage to America.

But don’t forget the damage done during the first tabloid impeachment. Nancy Pelosi and crew were so consumed with staging their impeachment show, they ignored the encroaching dangers of COVID-19.

“Trump Makes a Phone Call! Democracy is Endangered!” was Weekly World News in the face of a worldwide pandemic.

What threat to our nation’s health or security is being missed now, during this new string of scandalous, shocking (fabricated) cover stories?

But perhaps we should look at the bright side. Americans will have plenty of time to read these Congress’s tabloid concoctions when standing in Biden’s unemployment lines.

Al Perrotta is the Managing Editor of The Stream and co-author, with John Zmirak, of The Politically Incorrect Guide to Immigration. You can follow him at @StreamingAl on Twitter and Parler, if his Twitter account is restored and Parler is allowed to again exist. You can also follow him @Streaming on Gab and MeWe.

If You Believe Pelosi and Schumer, I Want to Sell You a Bridge