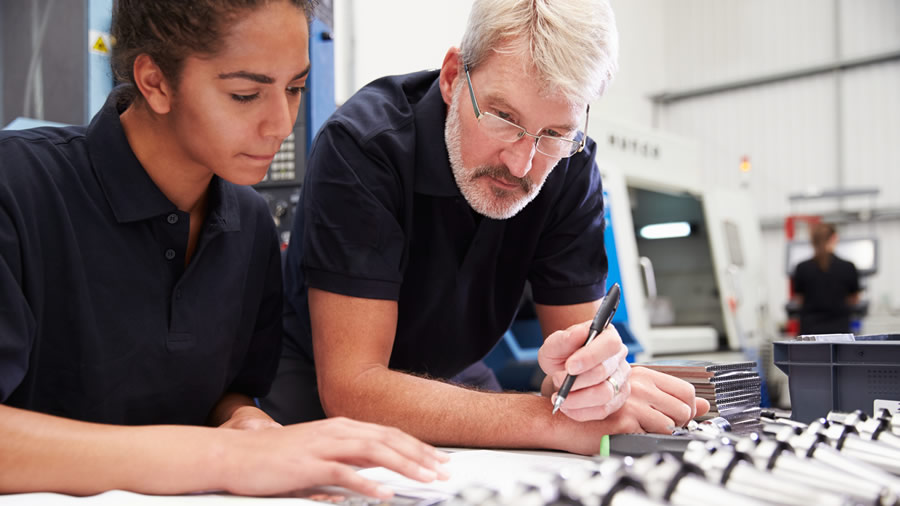 What comes to mind when you hear “apprenticeships”? Maybe someone with a hard hat, a tool belt around their waist and dirty hands. Maybe Mike Rowe doing something crazy on TV. (Or maybe Donald Trump firing someone, but that’s another story.) We tend to think of an apprenticeship as a path to a dirty job career — and one that’s hardly used even then. That seems to be changing, though.

A group of community colleges in Chicago have teamed up with local companies like Aon and Accenture. The goal is to funnel students into the financial and insurance industries. The partnership began in 2014. It was called the Chicago Apprenticeship Network. Nader Issa, writing for Chicago Sun Times, explains the program. “The plan was to create a viable alternative to a pricey four-year university degree by having students work toward an associate’s degree while completing a two-year apprenticeship at a business.”

The first apprentices were hired in 2017. By December 2018, Aon had 25 apprentices graduate from the City Colleges of Chicago after completing a new curriculum centered on insurance and finance. All 25 are now full-time employees.

A group of 20 firms, including McDonald’s and JPMorgan Chase, are members of the Chicago Apprenticeship Network. The number of apprentices they’ve created has increased from 75 in 2017 to about 400 today. By 2020, they plan to establish 1,000 new apprenticeship opportunities within their member organizations.

What’s driving this huge investment? In addition to funding the apprentices, the Chicago Apprenticeship Network made an initial $1.25 million investment in the City Colleges of Chicago. The intent is to create and support the new insurance- and finance-centered curriculum.

Is this some kind of “give back” social experiment? Not entirely. These companies are desperate to establish a talent pipeline into their organizations. For 14 consecutive months, the United States has had more job openings than people looking for jobs. Last year saw the highest share of people entering the work force from the sidelines since tracking began in the early 1990s. Even so, an estimated 3.5 million prime working-age Americans remain on the sidelines. Meanwhile, we have 7.4 million open jobs, a 5% uptick since last July.

So these companies are looking out for themselves. But they’re also addressing a widespread societal problem. As Greg Case, CEO of Aon, and Julie Sweet, CEO of Accenture North America, explained the issue in a joint op-ed this past January. “Combining on-the-job training with supplementary education to prepare workers for jobs in emerging fields, apprenticeships help align the needs of employers with the qualifications of job seekers. Crucially, they can also lay a foundation for reskilling workers to fill jobs that have been — or will be — disrupted by technology.”

The Department of Labor is also stepping up. Yesterday DOL announced some $280 million in additional funding for the expansion of apprenticeships. On June 15, 2017, President Trump had issued an executive order that created a Task Force on Apprenticeship Expansion. The Task Force gave its recommendations to the president on May 10, 2018.

The Labor Department also announced that they’ll be providing $183.8 million in Scaling Apprenticeship Through Sector-Based Strategies grants. It seems this is the second solicitation under this initiative. (The first was last year.) These grants will provide for private-public apprenticeship partnerships. They will be in information technology, advanced manufacturing and healthcare. These are sectors that are often reliant on H-1B visas.

In fact, these grants are to be funded through H-1B visa fees. These fees are paid by companies to bring foreign workers to America when Americans cannot be found to fill open jobs. The goal is to support the training of more than 85,000 apprentices in new or expanded apprenticeship programs within these identified sectors.

This funding is also intended to support efforts to increase access to apprenticeship among veterans, military spouses, service members re-entering the civilian workforce, and populations underrepresented in apprenticeship. This includes women, minorities and ex-offenders.

The Labor Department also announced yesterday that it plans to award up to $100 million in grant funds for an older program. It’s called Apprenticeships: Closing the Skills Gap. The goal is to fund up to 30 apprenticeship grants, with awards ranging from $500,000 to $6 million, depending on the proposed scope of the project. The full solicitation is now available.

There were 585,000 apprentices last year. That’s an uptick of 56 percent since 2013, according to the Department of Labor. Shouldn’t more industries be taking advantage of this growth?

That’s what leaders like Greg Case and Julie Sweet are pursuing, not just in Chicago but throughout the country. Writing for The Chronicle, Steven Johnson recounts a 2017 report from Burning Glass Technologies and Harvard’s Business School. It estimated that with more public support, apprenticeships could grow from 27 “core” professions — think carpentry, pipe-fitting, metalworking — to 74, filling 3.3 million job openings in the process.

Dr. Alex Chediak (Ph.D., U.C. Berkeley) is a professor and the author of Thriving at College (Tyndale House, 2011), a roadmap for how students can best navigate the challenges of their college years. His latest book is Beating the College Debt Trap. Learn more about him at www.alexchediak.com, and follow him on Twitter (@chediak).