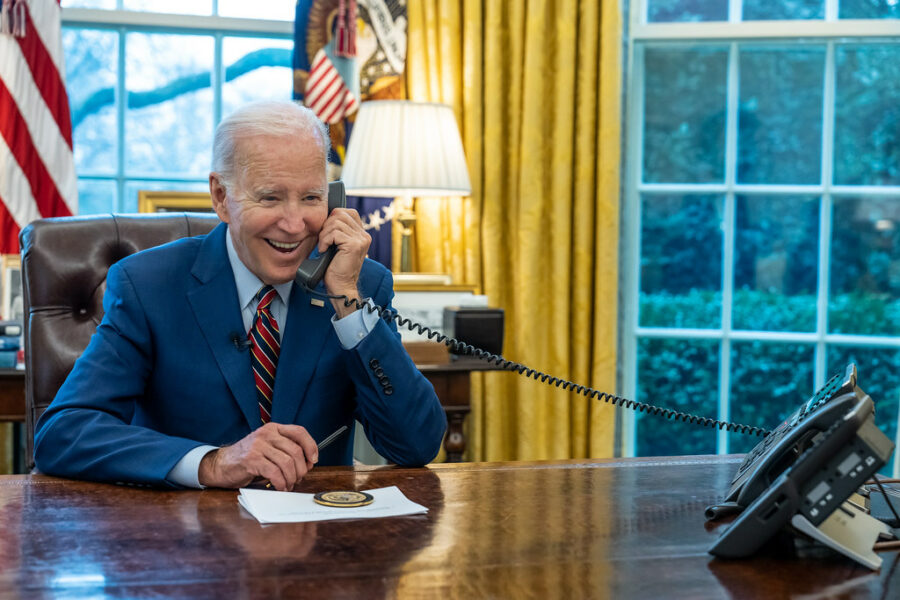 "And if nobody answers, just leave the burgers on top of the boxes of top secret documents." President Joe Biden places a carry-out order for his lunch with the Vice President at local restaurant “Ghost Burger” while recording a video about the importance of supporting small businesses, Tuesday, January 17, 2023.

Classified documents keep popping up at Biden’s crib like dandelions.

Remember just days ago, when the White House said Biden’s lawyers had conducted a thorough search of Biden’s homes and found only a handful of additional classified documents in Wilmington? Well, apparently — or conveniently — they didn’t look close enough.

DOJ took possession of materials it deemed within the scope of its inquiry, including six items consisting of documents with classification markings and surrounding materials, some of which were from the President’s service in the Senate and some of which were from his tenure as Vice President. DOJ also took for further review personally handwritten notes from the vice-presidential years.

Unlike the Mar-a-Lago raid, Biden’s personal lawyers and White House Counsel were allowed to be present during the search.

It is unclear why we’re hearing this from Biden’s personal spin-meisters, instead of the DOJ. The same DOJ was happy to splash pictures of Trump’s documents all over the Western world.

It is unclear why Biden would have classified documents from his days as a senator. (And you gotta wonder. Any documents about Tara Reade’s rape charges against Biden in any of those stashes?)

It is also unknown why the FBI has not seen fit to search Biden’s Rehoboth Beach house as well, now that classified documents keep turning up in Biden garages, libraries and offices. After all — as was just proven — just because Biden’s people say they’ve checked a house, it doesn’t mean they actually checked the house.

Biden was staying in Rehoboth this weekend. Ah, a crisp weekend at the beach. Bet the fireplaces were roarin’.

Biden Has “No Regrets” About All This Document Mishandling

Amazingly, if not surprisingly, Biden says he has “no regrets” about his mishandling of classified documents. “I think you’re going to find there’s nothing there,” he told reporters during a trip Thursday to California, “I have no regrets.”

“There’s no there there,” he insisted. He also has claimed no knowledge of what classified documents have been found. If Biden doesn’t know what’s in the documents, how can he know he has no regrets leaving them around? Oh, wait. I forgot. He takes the protection of classified documents “very seriously.”

As a criminal defense attorney, I would be mortified by a client publicly dismissing the seriousness of a potential crime while he is under investigation. For most defendants, it would constitute “bearding the lion” and prosecutors would not take kindly to the approach.

Indeed, it is never a good idea to go public with expressions of no regrets when you are being investigated on whether you took classification laws seriously. The statement was right out of the Alec Baldwin School of Criminal Defense in claiming that the gun did it. Fortunately, the president is not (yet) saying that the Corvette did it.

This would be one amazing coincidence. As the Biden classified documents scandal worsens, the man many believe is actually running the country, White House Chief of Staff Ron Klain, is reportedly “stepping down” right after the State of the Union.

The “sources” who are yapping to the media about Klain’s pending departure insist Klain has been planning to leave since the mid-terms, citing the exhausting nature of the job. So a man who has been real tight with Biden for years is leaving right when the going is getting tough? Even if he feels wiped out, he must know that the optics of the powerful chief of staff bailing in the midst of crisis will hurt Biden.

But think about it. Is Klain a rat leaving a sinking ship? Or did he realize that he was being set up as the fall guy for his handling of the crisis, and decide to step down ahead of the guillotine? Stay tuned to “As the Swamp Bubbles.”

The Chief of Staff isn’t the only one ducking for cover. Looks like the Secret Service, too, is turning.

“As a Matter of Fact, We Do Keep Visitor Records”

For those of you who thought the Secret Service was pulling your leg when it claimed it had no visitor logs for Biden’s Wilmington mansion, you were right. The Secret Service is now admitting it does, in fact have records.

This is a far cry from last Monday where this same spokesman stated, “We don’t independently maintain our own visitor logs because it’s a private residence.” Even before the classified document scandal broke, the Secret Service responded to FOIA requests by denying that any records existed.

DOJ to Join the Stonewalling of Congress

Meanwhile, to the surprise of absolutely no one, the Biden Department of Justice is telling Congress to buzz off. The Department will not hand over any information on the assorted Biden scandals being investigated by Congress, including the growing classified document fiasco.

Responding to the House Judicial Committee, the DOJ said it was “committed” to cooperating, “consistent with our obligation to protect Executive Branch confidentiality interests.” And that includes “not divulging information on ongoing investigations.” Exactly the line that Deep State liar Andrew “Russian Disinfo” McCabe suggested the Department take.

Of course, the investigation into Hunter Biden’s assorted influence peddling schemes has been slow-walked for years, and now there’s the Special Counsel appointed to look into the classified document scandal. So, sorry, boys. Guess you’re out of luck.

Why’s DOJ scared to cooperate with our investigations?

Has anybody in Washington learned that the cover-up always ends up worse than the crime? (Well, maybe not in the case of the CIA’s involvement in the assassination of Kennedy, but you get the point.)

And finally, in a bit of historical irony, back in 1977, Joe Biden blocked Jimmy Carter’s nominee for CIA Director over mishandled classified documents. “C’mon ,man! Fella shoulda kept ‘em next to the Corvette, man!