Thousands of activists traveled from across the nation to visit CPAC. Two days later, thousands more came to AIPAC. Listen in to the issues and passion driving their activism. 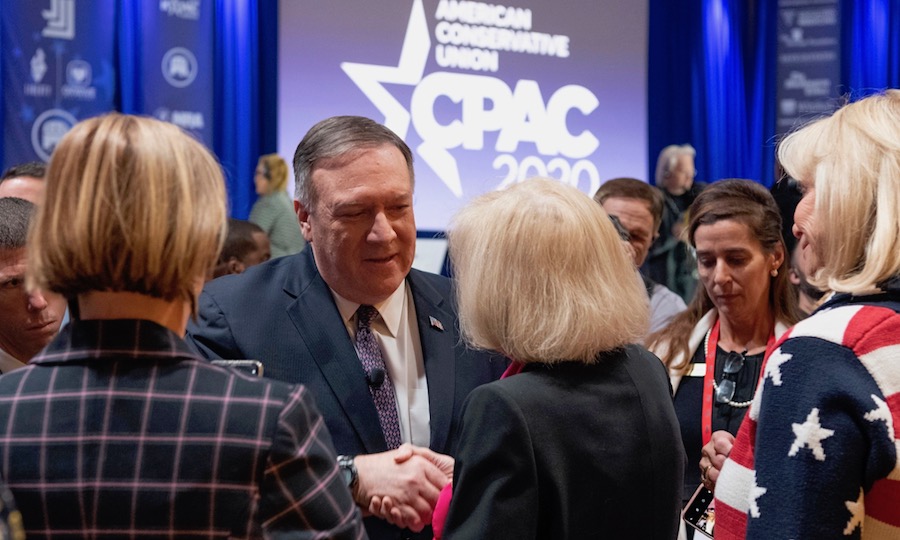 Secretary of State Mike Pompeo shakes hands after delivering a speech at CPAC 2020. The event was held at Gaylord National Resort, National Harbor, Maryland, on February 28, 2020.

“Super Tuesday is a crucial day for Texans,” said Diane Benjamin of Dallas, Texas. “I will be heading back home early to participate and mobilize for those important elections.”

Standing out in a cowboy hat emblazoned with Texas and American flags, Benjamin had traveled across the country to attend the American Israel Political Affairs Committee (AIPAC) Policy Conference. More than 18,000 advocates came to Washington, D.C., in solidarity with this special relationship.

Meanwhile, two days prior and ten miles away, another D.C.-area gathering united over 15,000 conservatives. At the Conservative Political Action Conference 2020, upcoming elections were front and center as President Trump addressed the young crowd.

Trump touted his record since taking office in January 2017. “Our economy is roaring [and] jobs are booming,” he said. “Opportunity is soaring, poverty is plummeting, crime is falling, and America is stronger today than ever before.

Cheering him on was Ben Porter, a sophomore at Grove City College in northwest Pennsylvania.

“I support Trump because he provides answers,” said Porter. “Have you watched the debates? The ideas we’re hearing from those candidates are bonkers.”

Both events provide a window into the policy issues that animate the nation’s most committed activists on the right. Yet even some attendees at these premier events were undecided on their choices this election.

A recent Pew Research poll found that 67 percent of Americans consider the economy their top issue priority. With this year’s CPAC themed as “America vs. Socialism,” activists responded vocally to candidates promising to “transform” the free-market economy.

“Look at history,” said Zachary O’Neil, a college sophomore speaking alongside his friend Porter. “Capitalism has proven to create the most prosperity for the most people. The debate is over on this.”

The two college students proudly mention their school ranks as the “second most conservative” in the nation. But they note many friends and family don’t share their views.

“We still live in America,” said Porter. “We read widely in our classes, including the Communist Manifesto. They teach ideas across the spectrum, and we discuss what these guys actually said. Sometimes I feel like it’s more unbiased than other places.”

Two days later at AIPAC, high school students from Jacksonville, Florida, grappled with what issues mattered most to them. “I think supporting Israel and low taxes matter most to me,” said Stephen Mosher, who will turn 18 before the election.

A football star at his local high school, Mosher finds that many friends are ambivalent about Israel. “Most people just don’t care,” he said. “I’m a part of our school’s Jewish Student Union. My teammates have supported me, though, and showed up at our events.”

His friend Jacob Inrom, the son of a rabbi, reflected a trend from the Pew Research poll. For millennials and younger people, environmental concerns are rising in importance.

“To me, climate change is the most important issue,” said Inrom. “We should all be able to agree it’s a human issue that will affect everyone on the planet.” 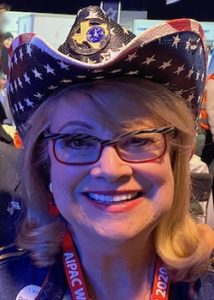 While the two teens were uncertain about their vote, Dallas-area Republican Party precinct chair Diane Benjamin knew whom she supported.

“In Trump, we have the strongest pro-Israel president ever,” she said.

“Today, I see many Jewish people falling by the wayside and assimilating to the culture,” said Benjamin, a devout Jewish grandmother.

“They forget that they have a mission to follow the laws of our Torah. Honestly, I feel more comfortable with strong Christians who know their Bible than irreligious Jews who have forgotten their history.”

“I’m grateful to my Christian friends, because I don’t know where Israel would be without them.”

Bloomberg surprisingly aligned with the Trump administration on several points. He supported the U.S. Embassy move to Jerusalem, and said he would never impose conditions on military aid to Israel.

Meanwhile, Booker spoke eloquently on the importance of people coming together during a polarizing political season.

Some activists weren’t buying it. “Talk is cheap,” said Benjamin. “You can say this or that. But I’m much more impressed that our president is a man of action and policies.”

When I think of @SenBooker, civic grace aren't the first two words that come to mind. pic.twitter.com/eJvg1zPl4X

Even those new to the political process considered much of the rhetoric less than genuine.

“Not to be cynical, but a lot of the candidates are here to make themselves look good,” said Inrom. “That’s what politics is. But I do appreciate what they said in support of Israel.”

Words, Actions and the Issue of Life

For one 20-something young woman at CPAC, another cultural hot-button issue motivates her involvement in the political process.

“This issue of abortion is the most important crisis that we need to respond to in our day,” said Prudence Robertson. “Over 60 million children in the U.S. have been killed by abortion.”

Having recently joined the staff of pro-life group Susan B. Anthony List (SBA List), she connected the dots between words and actions. “On the debate stage in 2016, [Trump] drew a line between himself and Hillary Clinton,” said Robertson. “He said he was not in support of late-term abortion, and that he believes every child is a sacred gift from God.”

Upon his victory, she contends those words translated into actual decisions. “He has worked to transform our federal court system,” she said. “Trump has nominated almost 200 judges that will abide by the Constitution and uphold the most sacred right — the right to life.

Your Vote Is Your Voice

“As a pro-life woman, I am all about protecting my generation,” said Robertson. “We are organizing people to go door-to-door to get out the vote. In these battleground states, we have one-on-one conversations with average Americans. There is no better time than now to get personal and impress upon people the importance of this issue.”

At the same time, even college students at CPAC speculated about the future of the conservative movement. They recognized some who share their values repudiate certain rhetoric on the campaign trail.

“CPAC today feels much more like Trump’s brand than the conservative brand,” said O’Neil. “Five years from now, what does CPAC look like? I’m more interested in the ideas than the rally energy.”

Explore The Stream’s complete elections coverage, and sign up to receive top stories every week.