What Is It They Fear? 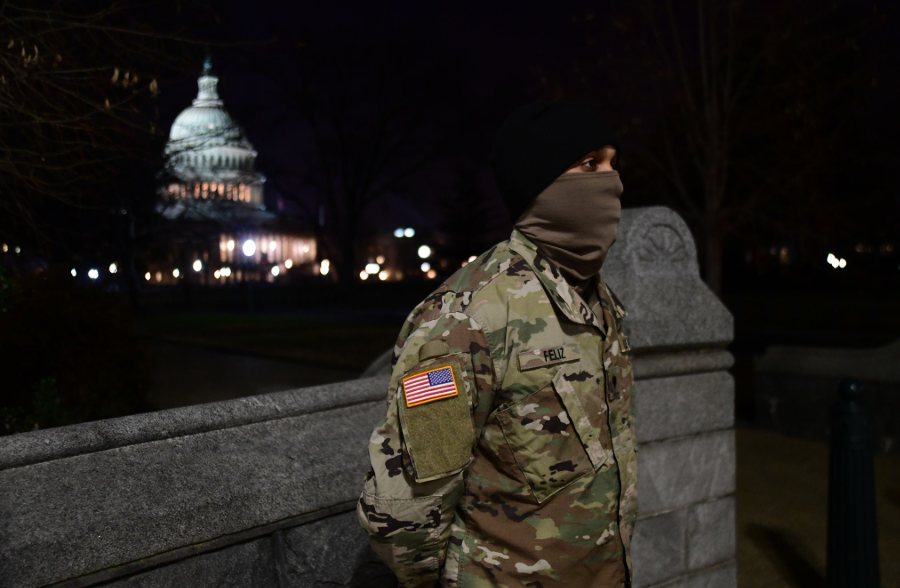 At this moment, some 25,000 National Guard troops are crammed in the Nation’s Capital to protect Joe Biden’s inauguration … except now all 25,000 are being vetted. Not for any criminal behavior, but to see if they have “extreme views.” According to the Associated Press, those that do will face disciplinary action. But what counts as an “extreme view” these days?

According to the Big Tech overlords and lazy corporate lapdogs and certainly the Democratic party, it’s “Anyone who dares question how Joe Biden won.” Or “Anyone in a MAGA hat. (Unless it’s a Antifa impersonating a Trump supporter.)” Or “Any social media site or news channel that is gaining ground on CNN, Twitter or Facebook.”

Acting Defense Secretary Christopher Miller asserted Monday there has been no intelligence suggesting an insider threat. Army Secretary Ryan McCarthy said Sunday he and other leaders have not seen any evidence of insider threats, and the vetting of National Guard troops has not flagged any problems.

But that hasn’t stopped Democrat Rep. Steve Cohen from declaring there is such a threat to Biden, and he doesn’t feel safe being protected by the brave soldiers of the National Guard. Why? Because 90% of them are white males and “Only about 20% of white males voted for Biden.”

.@RepCohen on his concerns w/ the National Guard securing the Inauguration: “The [National] Guard is 90 some-odd percent male; and only about 20 percent of white males voted for Biden … there are probably not more than 25% of the people there protecting us that voted for Biden” pic.twitter.com/ofQfLuCw8I

Hmmm, does a Democratic congressman really want to suggest that if you voted for Trump you might be a seditionist? What happened to the idea that military people are professionals and do their jobs regardless of political preferences? https://t.co/EGTfALYBYV

Remember the media explains that Biden won because he made surprising gains among white males. So either Biden did only legitimately get only 20% of the white male vote, and there’s no way he earned 81 million votes. OR Biden did make gains in white male support and Cohen’s racial profiling is not only morally wrong, it’s totally illogical.

It is certainly an insult to the honor of our soldiers. Stream contributor and author of the new best seller Three Wise Men, Tom Sileo is shocked by Cohen spitting in the face of those protecting him. He told The Stream:

“I have spent the past decade meeting and interviewing brave U.S. service members, veterans and military families. Not once has anyone ever told me that they enlisted to serve a specific president. They volunteered to defend our country and protect Americans of all backgrounds and beliefs.”

Of course, it’s not just troops protecting Joe Biden’s installation as president. The same Democrats that spent four years insisting walls don’t work in protecting America have insisted on a 12’ wall to protect their own crib.

The same Democrats who unleashed media hell on President Trump when the Secret Service tried to expand the security perimeter around the White House after Biden’s Antifa and BLM pals rioted, tried to break onto the grounds, and injured scores of agents. And vowed to try again.

Guess what else is now locked down tight in advance of the inauguration: Federal prisons.

The Bureau of Prisons announced Saturday, “temporary security measures” at the nation’s 122 federal prison facilities “in light of current events occurring around the country.”

Tell me, sane reader, do you think of prisons as MAGA Country? Sure, it was Donald Trump who got prison reform done and signed the Second Chance act … undoing the damage done by Joe Biden’s Crime Bill and prosecutors like Kamala Harris. But is anyone expecting a prison riot from Trump supporters?

Which gets to the big question: What are these people expecting?

What Are These People Expecting?

This morning, a little fire at a homeless camp near the Capitol forced yet another cancellation of rehearsals for the inaugural. “An external threat!!!” we were told with halting, fearful breath.

The Nation’s Capital is completely shut down as if they expect the Chinese Army to attempt to cross the Potomac. Sorry. Bad analogy. An incoming administration that pocketed a billion in Chinese cash and just named Mao-groupie Anita Dunn as a Senior Advisor has more love than fear of the CCP.

So who do they fear? Being overrun by Biden’s 80,000,000 screaming, adoring voters like security guards at the height of Beatlemania? Joe Bros ignoring COVID restrictions to see their hero? Not in a million years. Not for a man who had trouble filling 10 circles at a “rally.”

They can’t be fearing Trump supporters. No MAGA rallies are planned. The Proud Boys say they’re not going to show up and be somebody’s patsy. Are Democrats fearing a few right-wing extremist groups? To the tune of 25,000 troops, heavy equipment, drones, ID checks? Two weeks after ignoring threats from these same groups?

The loudest voice calling for protests in DC and around the nation Wednesday is Antifa. And the riotous hordes Democrats spent the summer cheering, Harris bailed out and Biden dismissed as an “idea.”

The true insurrectionists. But we were assured by Biden, Harris and Michelle Obama that electing Joe would make that all go away. So surely, it can’t be them.

So again, what are they afraid of?

President Roosevelt said, “The only thing we have to fear is fear itself.”

Joe Biden is saying, “The only thing I fear is our own American troops.”