What ‘Created Equal’ Means, and Why Not Knowing Leaves Us In Such a Mess 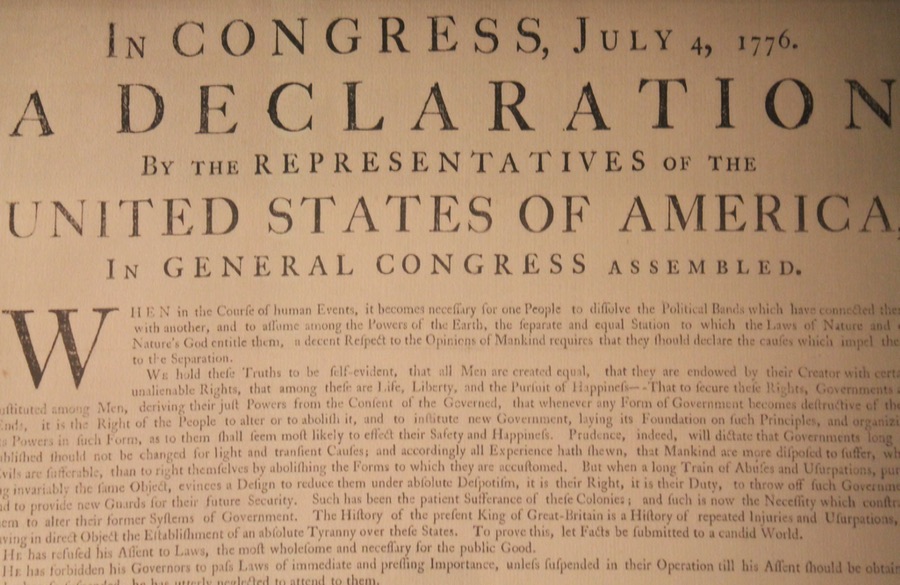 His name was Mr. Janowicz, he was my eighth grade history teacher, and after all these years I still haven’t forgotten the question he asked — or the answer he gave.

We were studying the Declaration of Independence. “What does ‘created equal’ mean?” he asked. The more we talked, the more we felt stumped. Equal in skill? Talent? Money? Strength? Intelligence? These answers weren’t just wrong, they were obviously wrong.

One of us probably said, “Equal right to vote,” but no, the Declaration says our equality comes ahead of our rights, such as voting. I don’t remember whether anyone suggested “equal in opportunity,” but that’s obviously wrong, too, no matter what your politics might be. The Declaration doesn’t say we should be equal, but that we are equal.

Such a crucial phrase in American history, yet we had no idea what it meant. Sure, we were just eighth-graders, but how many adults would stumble over the question the same way?

Mr. Janowicz wasn’t about to stumble. He was just waiting us out. It must have been good teaching technique, considering how long his lesson has stuck with me. “Try this,” he said. “We’re all created equal in worth.”

Simple, brilliant, and right. No other answer fits; this one does. It explains why the law should apply equally to all: because no one’s extra worth grants him or her an exception. It explains why rights should be equal, for the same reason.

There’s history there, of course. America was still a set of colonies when Jefferson wrote the Declaration. We’d been birthed out of a British system of royalty and nobility, where some people had more rights because they had “higher worth.”

People try to tell us now that we don’t need to study Western history, but here we can see one reason (there are many) that’s foolish. Hardly any word is more important in today’s politics than “equal,” and if you don’t know your history, you don’t know what it really means.

Worth What, To Whom?

There’s an even worse problem today, though, for people who want to understand this human worth. Jefferson didn’t just say we’re equal but that we’re created equal. The word “worth” can’t just stand on its own, you see. Somewhere it has to connect with the question, “Worth what, and to whom?”

In the Christian-saturated worldview of the American colonies, that answer came easily and automatically: Each person is created in the image of God, and we’re worth an infinite amount to Him. It is He who “endowed” us “with certain unalienable rights.” We have equal worth in His eyes, so we have equal rights. “Unalienable” doesn’t mean, “no one should take them away.” It means having this rights are part of what it means to be human. You could violate a person’s rights, but you can’t take them away, any more than you could draw a circle and leave the roundness out of it.

Sentiment is often stupid. We’ve lost track of the true meaning of equality, but we can’t give up the sentiment; so we flail around to figure what it’s about.

Leave God out, though, and all that quickly falls apart. Naturalistic evolution (evolution with no guiding purpose behind it) has no higher answer to the “whom” question. The best it can say is that we’re worth a lot to ourselves and each other. The trouble there, though, is that the whole human species is worth no more than any other organism on the planet. Evolution knows nothing of “higher” or “lower”; all it does is pick out survivors from not-survivors.

It never heard of rights, either, but it does specialize in competition. Suppose one group of people starts claiming they’re worth more than the rest, so they deserve better food, better medicine, better living and working conditions. They out-live and out-reproduce the rest as a result. What would evolution “think” of this, if it could think? It’d be jumping up and down on the sidelines cheering for the winner!

There’s no real basis for human worth there, no foundation for human rights, and not much for equality, either, except for a sentimental attachment to the idea. The attachment is strong, though, and why shouldn’t it be? What Jefferson wrote about us as humans is true, even if we’ve forgotten why it’s true.

But sentiment is often stupid. We’ve lost track of the true meaning of equality, but we can’t give up the sentiment; so we flail around to figure what it’s about. Equal access to bathrooms? That’s the big issue? Really? That’s exactly what flailing looks like.

We won’t recover the truth of equality — or the truth of human rights — until we re-connect with the truth of our Creator. Until then, you can expect sentiment to rule, but foolishly, just as it is doing more and more each day now.

A New Declaration for America From 1776 Unites