What BLM, Antifa and the Mainstream Media Don’t Want You to Think About 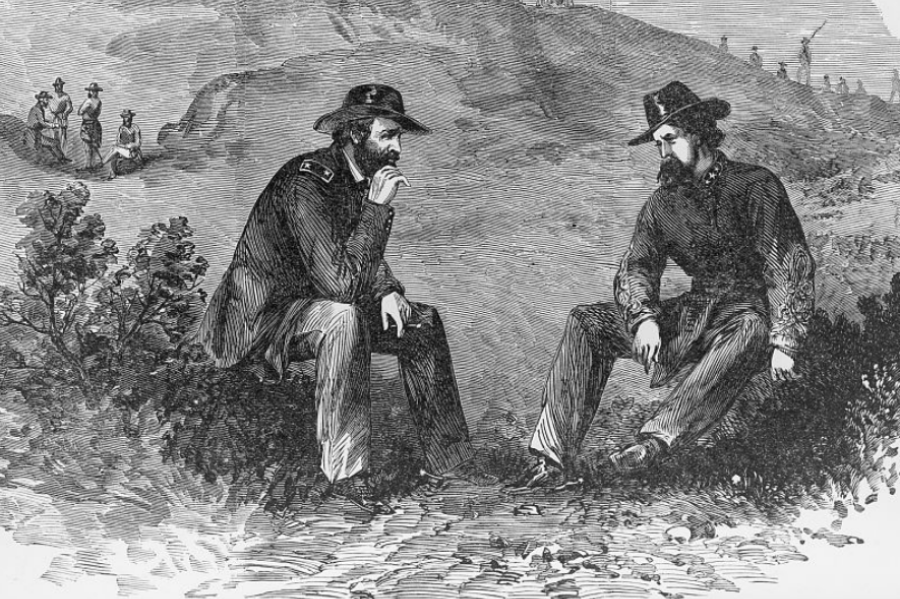 General Ulysses S. Grant negotiating with the defeated Confederate general John Pemberton after the battle of Vicksburg. Despite his crucial role in defeating the Confederacy, protesters in San Francisco pulled down his statue in Golden Gate Park.

We cannot solve the problem of racism without understanding its history. One friend responded to this claim with “Who invented slavery is irrelevant.” The problem is here, now, he said. We need to stop these residual racist tendencies.

O.K. But is it really such a bad idea to know the history of the problem whose lingering aftereffects we are trying to eradicate? In the same way that replacing a tire on your car will not get it to start if the battery is dead, we cannot fix the problem of racial inequality if we do not fully understand the problem.

For example, the same friend also said, “slavery in the USA has a history that very specifically affects one group more than others.” That may be true, but it’s important to note that we purchased black African slaves from … other black Africans. Knowing that sort of historical information kind of mitigates the whole racist argument, don’t ya think?

When you study the history of slavery, it becomes clear that prejudice was not its sole cause. There were strong economic reasons for slavery’s existence. Furthermore, there were huge problems at the end of the Civil War attempting to integrate the 3.9 million newly freed slaves into the American economy. Sometimes a problem isn’t just black or white.

Unfortunately, even if we come up with a solution to the repercussions of slavery, an even larger problem exists that no one wishes to discuss. Racial strife is a fantastic way for those who wish to wield power to do so, or those already in power to maintain it. While a lot of people talk a good game about wanting to alleviate racial discord, there are many others who actively engage in fomenting such trouble. Often times they are one and the same.

How else can we explain riots erupting, being justified to honor the memory of George Floyd’s murder, while the memory of David Dorn, an African American police officer murdered defending a business during a riot hasn’t been mentioned?

Hatred is not systemic; it is a learned behavior. The good news here is: if it can be learned, it can be unlearned.

Antifa, Black Lives Matter and the Main Stream Media playact as though they care about the poor state of race relations. They co-opt a tragic event like George Floyd’s death and use it for their purposes. The truth is: these groups are agitators, nothing more.

When you’ve seen their act more than once, you begin to see the pattern. Black lives matter more in an election year than in other years. That only the 10 to 30 black lives being taken by white police officers in a given year seem to matter. That the thousands of black lives taken every year by other blacks doesn’t seem to matter at all, let alone cause riots. And, of course, these people don’t even mention the number one taker of black lives every year: abortion. Black fetuses’ lives don’t matter.

Don’t let these groups fool you. They care no more for the lives of black people than your average KKK member. Their goal is to present the idea that somehow slavery and racism are systemic in western, Judeo-Christian, capitalist societies, specifically, the United States of America. And it’s not just white cops, but all white people that are racist. Even those who think they aren’t, somehow are.

Why else would it be acceptable to tear down a statue of Ulysses S. Grant, one of the two generals most responsible for winning the war against slavery? The San Francisco police have arrested no one and aren’t going to try. The mainstream media aren’t crying out against this terrible mistake.

If you listen carefully to their daily postings and broadcasts, you will notice something else missing. Antifa and BLM don’t offer solutions. They never suggest anything constructive. All they do is tear down and criticize. This is by design. Because their intent is not to bring together, but to separate. To destroy this country from within.

Occasionally these groups will blather childish nonsense like defunding the police or perhaps paying reparations. But these are fake policies also designed to split us apart.

What is the Answer?

If racism truly is systemic, the only solution is to tear down the system and start again. But, it’s not true. You know how to prove it? Look at children, particularly newborns. They have no problems with each other. Babies do not display racist or prejudicial tendencies. Hatred is not systemic; it is a learned behavior. The good news here is: if it can be learned, it can be unlearned.