What a Friend We Have in Moloch 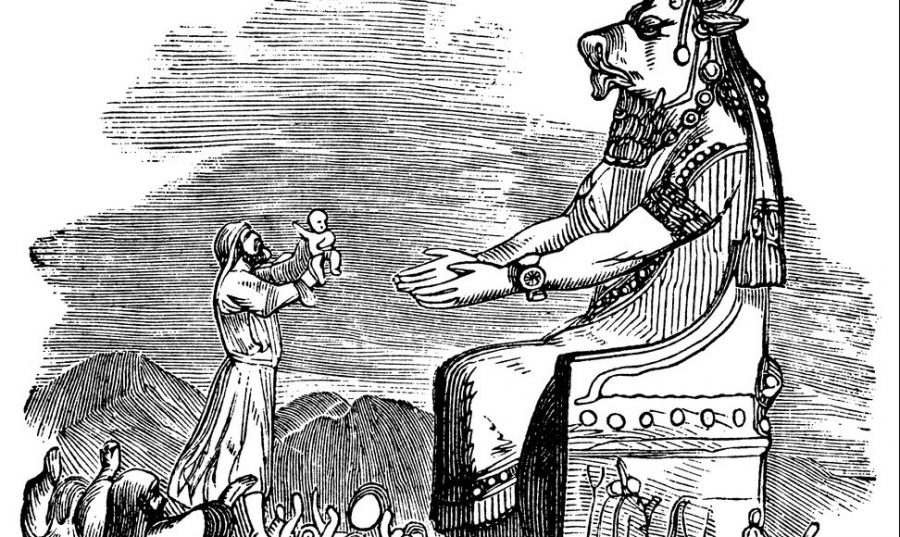 When crises come, we grasp at straws. In between realistic preparation, and efforts at humble prayer, we look for consoling thoughts, whether rational or irrational. At various times during this pandemic, my mind has tossed up, like a Magic 8 Ball, each of the following observations. Mind you, I don’t endorse all these sentiments. I present them here simply in the interests of science:

As I said, this stuff just bubbles up, like the oil in the front yard of The Beverly Hillbillies.

Will the Coronavirus Save Babies?

But one thought that came to me seemed a little more substantive:

Surely when nurses and doctors are getting mortally sick for lack of face masks and gloves, and we’re making people with toothaches and torn knees postpone urgent (but not life-saving) procedures … we’re going to close the abortion clinics. Right? Wouldn’t that be interesting. What if the number of lives lost to the virus was lower than the number of babies saved? This virus really shut down our country on the Feast of the Annunciation. That is, of Jesus’ conception. The babies saved now will be born at Christmas time. Will that wake America up?

Events quickly shot down my hopes. It turns out that abortion is a really essential service, while religious rituals aren’t. Too few of our religious leaders are even trying to offer services safely, with masks and distancing. But the abortion movement’s unhindered. It’s screaming with all its media power to its devotees among our elites. And they’re listening. Only five states took this opportunity to save innocent lives by declaring abortion “inessential”: Ohio, Texas, Oklahoma, Alabama, and Iowa. (I’m grateful to live in one of them.)

That brought me another, really unwanted thought: In forty-five states, the only religious rites permitted by the government is child sacrifice.

The Sacrament of the Left

I was all set to write a column about that in detail. But somebody already has, and I can’t do better. Bettina di Fiore wrote a powerful story at the excellent Catholic site OnePeterFive. As she observed:

[W]here God has been abandoned, societies have always devolved into using child sacrifice as a means of solving their problems, especially in times of crisis.

The ancient Carthaginians, for example, sacrificed newborns at a place called Tophet. It is thought that these sacrifices “may … have been seen as a philanthropic act for the good of the whole community,” states Dr. Josephine Quinn, a lecturer in ancient history at Oxford. Some experts conjecture that these sacrifices were instruments of population control and that well-to-do Carthaginians used them as a means of preserving their wealth.

Did you get that? At least when the Aztecs in Mexico cut the hearts out of war prisoners, they thought that they had to. They believed that without getting fed by human blood, their gods would die and the universe be destroyed. In Carthage, people did it (as Hannibal’s parents did with his older sibling) to get ahead. It was a lot like … aborting your first child so you can finish law school.

Offering Our Lives for Justice Ginsburg

Do you remember when Justice Ruth Bader Ginsburg got sick, and pro-choicers on Twitter were musing about whether they’d give up years from their own lives, in order to keep her on the court till a pro-abort president gets elected?

If it were possible, would you subtract one day off your life and add it to Ruth Bader Ginsburg’s life for one extra day of good health? If just 10,000 people did this, it would add 27 productive years to her life. pic.twitter.com/RurqFmWZGp

The impulse to pray and sacrifice is baked into the human cake. If we won’t train it upward, it starts wriggling downward, and won’t stop burrowing till it reaches the pit of Hell.

Di Fiore’s piece isn’t for the timid. She hunted down and presents the prayers and rituals that some women are using to make their abortions into … religious experiences. She offers Jewish, pagan, and even quasi-Christian rites that dark souls have adapted to make the destruction of their children feel more … sacred.

Go read all that if you can. Brava to DiFiori for having the stomach to compile it. In 90 percent of our nation, the government’s mandating that child sacrifice continue in time of pandemic, but preventing churches from offering bread and wine “in memory of Me.”

Will God spare such a nation? I hope so, but I feel it’s an irrational and almost a blasphemous hope.

The Dark Side Is Powerful

What drives us to seek the darkness, the really definitive evil of sacrificing the innocent to spare the guilty? (There’s no other way to describe killing almost a million children per year for our sexual convenience.)

As usual, G.K. Chesterton offers an answer. One of the best Christian apologetics ever written in English, as attested by C.S. Lewis, is Chesterton’s The Everlasting Man. The book spends many, many pages on, of all things, the Punic Wars. Why? Because Rome’s enemy in those wars, Carthage, practiced child sacrifice. Facing down the eugenicists of his day, Chesterton may have even seen legal abortion coming.

Carthage took its religion from Canaan. It practiced those dark fertility cults, complete with child sacrifice, on a massive imperial scale. The very gods which the One God’s prophets had denounced as literal demons? These now spread across the Mediterranean, via Carthage’s massive navy. That culture was irredeemable, those laws must be blotted out. And so, Chesterton speculates, God used Rome’s power to do exactly that. Against all odds, to snuff out the gods of Carthage, and sow its soil with salt.

In Search of the Darkest, the Worst

Chesterton speaks to us, in a land where abortion is 90% “essential,” when he delves into the souls of those who practice child sacrifice. What could possibly motivate that, he wonders. And he offers some speculative answers:

[W]ith the appeal to lower spirits comes the horrible notion that the gesture must not only be very small but very low; that it must be a monkey trick of an utterly ugly and unworthy sort. Sooner or later a man deliberately sets himself to do the most disgusting thing he can think of. It is felt that the extreme of evil will extort a sort of attention or answer from the evil powers under the surface of the world.

[C]ertain anti-human antagonisms seem to recur in this tradition of black magic. There may be suspected as running through it everywhere, for instance, a mystical hatred of the idea of childhood.

That is what we face in our land today. May God have abundant mercy on us all.