Were the McCloskeys Guilty of Killing the Children’s Bees? The Reporter Didn’t Check 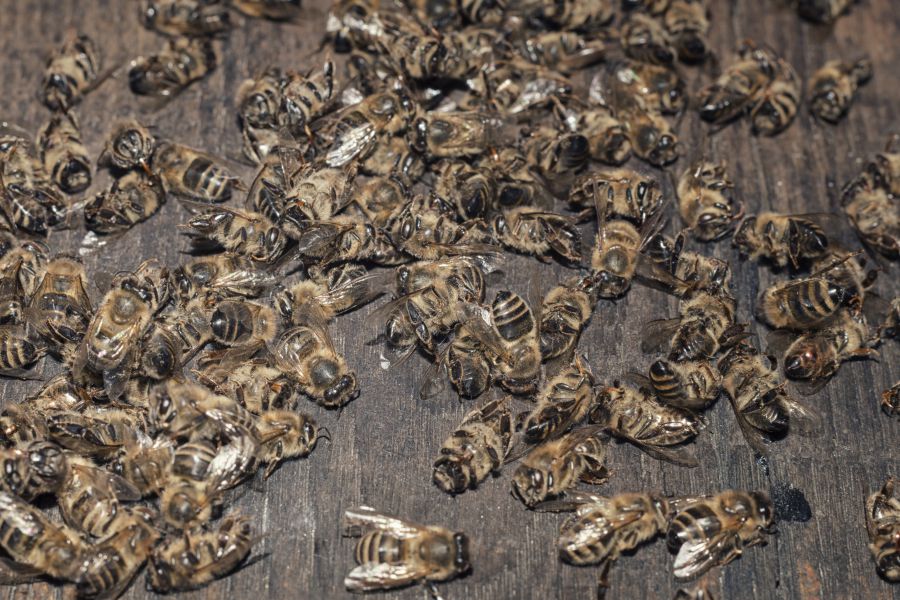 The story’s out that the McCloskeys, the gun-toting couple who spoke at the Republican convention on Monday night, destroyed the next door synagogue’s bee hives because the fence separating the properties sits six inches into the McCloskeys’ land. A story on Forward is a typical example. A St. Louis Post-Dispatch story mentions it in passing, as if it were a well-known fact.

The story as Forward and other places tell it doesn’t add up. It has some holes. It may be true, but it may not be. Journalists should have checked the story before publishing it.

In 2013, the Jewish Central Reform Congregation put beehives along the wall between their property and the McCloskeys’ mansion. The synagogue wanted to make honey to use in the traditional dish of apples and honey served on Rosh Hashanah, the Jewish New Year. It was a project for the children.

According to Forward: “One morning they found the hives destroyed and all the bees dead. Mark McCloskey had taken an ax or sledgehammer to them. His issue? The fence between them sat six inches inside the McCloskey’s property line. The hives were his to wreck.”

“He could have picked up the phone and said, ‘Hey, those beehives are on my property,’ and we would have happily moved them,” said the synagogue’s rabbi, Susan Talve. She felt she should say something now, seven years later, because “there’s such a lack of civility that’s happening, and I don’t feel like I can be a part of that, and silence is complicity.”

She called the couple “bullies” and their speaking at the Republican convention “a win for bullies.” They’re “people who hate.”

But did they do what the story says they did? I’m not defending the McCloskeys. They seem to be people you would not want as neighbors. They’ve been charged with pulling guns on people walking down the sidewalk. But journalists should tell the truth about anyone they write about. They should go the second mile to make sure a story that makes someone look bad actually happened the way their sources describe it. And they should spot the problems with a story, especially a story like this one that seemed so perfect. They should hear alarm bells.

The McCloskeys Too Perfect

First, the McCloskeys are such perfect cultural stereotypes. Rich lawyers living in a mansion and pulling their guns on people walking by, and said to use the law to bully their neighbors. It’s too perfect a picture. They’re perfect villains. If they were characters in a movie, they’d be the boo-hiss characters, played for laughs or contempt.

Readers think of course people like that would destroy beehives over six inches of property. When the picture’s that perfect, making the story so easy to write, the journalist needs to question it.

The journalist should see this and be even more careful to get the story right. He has to protect himself from his own possible prejudice. When the subjects feel like such perfect villains, the good reporter gives them an extra benefit of the doubt.

I hate to bring this up, but another factor in the McCloskeys’ perfection as villains is that they aren’t the most attractive people in the world. Looks play into most people’s judgement, and into journalists’ judgment, far more than anyone wants to admit. The combination of that with their preppy clothes and their Rambo poses made too perfect a picture. Even were they saints, it would be hard for them to get a fair hearing.

The Story Too Imperfect

Second, the story seems to have one source, the rabbi. One source for a story seven years old. She may be telling the purest truth, or she may not. She may think she’s telling the whole truth but misremembering, because people do that. We shape our memories to make better stories.

The reporter doesn’t know. He does know that she’s on the other political side from the McCloskeys, since she calls them “people who hate” and mentions that members of her congregation were marching that day.

Finally, the story itself feels off. If the fence was on the McCloskeys’ property, wouldn’t they have long ago tried to force the synagogue to move it? The reporter needs to check the history and the facts.

The Forward story says “McCloskey left a note threatening to sue the synagogue for damages if the shattered hives were not removed at once.” But the note reproduced in the article itself says “This structure constitutes a trespass,” not structures, and goes on to refer to “all evidence of its construction.” That sounds like a note for another dispute.

Finally, as a friend pointed out, how would someone smash hives without getting stung a lot? Did McCloskey somehow poison them all before he smashed their hive?

He Should Have Checked

I don’t know what the real story is. You don’t know. And we don’t know because the journalist didn’t check a story he should have checked. Maybe it happened exactly that way, maybe it didn’t. The story itself offered enough red flags to require checking.

A competent journalist should have seen the problems and investigated further, especially because the McCloskeys were such perfect villains. They may be guilty of many things, but it’s possible they’re not guilty of this charge. We need journalists to check the stories that seem so perfect. Sometimes stories are too good to be true.

How to Save Journalism: Manual Labor