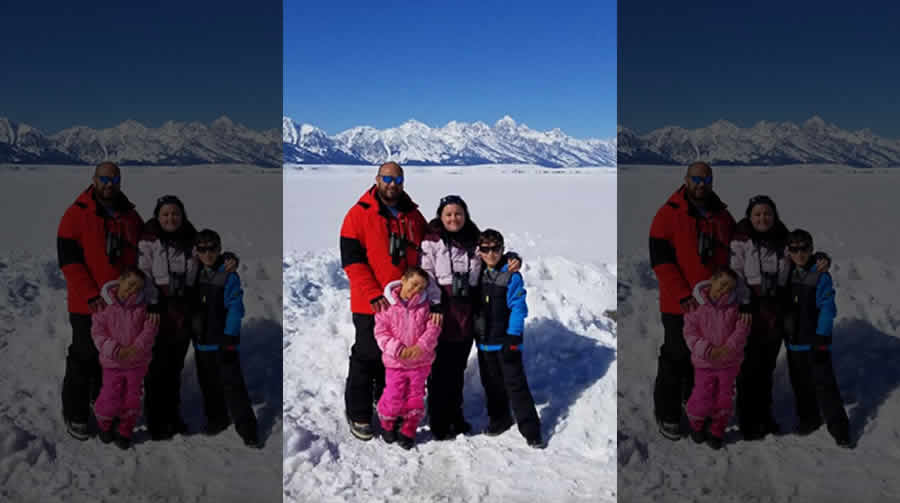 “We’re just leaving it in God’s hands. As a father, as a dad, that was one of the biggest things that I had to overcome. To come to the understanding that there’s nothing I can do for her. Period.”

Ruben Arias talks about his young daughter, Abigail. She’s been fighting cancer for over two years. In November, the doctors said that they couldn’t do any more for her. “Start enjoying life,” they told Abigail’s parents.

A lot of people have asked the Ariases how they do it. How they handle having a daughter with a terminal illness. “Like I tell everybody, we do it because God allows us to do it. Without Him, we would be lost. We know that we’re wrapped in His hands and He’s going to see us through this.”

The Ariases took to heart the doctor’s advice to start enjoying life. But Ruben is quick to point out that others have helped so much along the way. “All these people stepped up. So, we’re doing things, we’re doing things on her bucket list that we wouldn’t probably be able to do.”

The Freeport Police Department contacted Ruben. They wanted to do something for Abigail and her brother. They held a pancake breakfast called Pancakes With Santa. “We were praising God for them because of what they did that day. They showed a lot of love and support towards my daughter and our family as well.”

Not long after, the police department asked if the Ariases wanted to participate in what they called a Blue Santa Run. During this event of passing out candy and gifts, Police Chief Ray Garivey asked Abigail a question. “Hey, what are you going to do when you grow up?” Abigail replied, “I want to be a police officer.” Garivey looked at her dad. “Man, you know, she probably shouldn’t have told me that. We’re going to make that happen.”

On February 7, Abigail was sworn in as a police officer. At the city council meeting the mayor of Freeport declared that February 7 would forever be Abigail Arias Day. “It was a beautiful ceremony,” said Ruben.

Garivey said Abigail “wears the uniform with such pride and dignity.” Abigail has affected law enforcement officers and people from around the world. “She is inspiring, I mean, we have things that go on every day in law enforcement. … It’s nothing compared to a young lady who’s telling you that she wants to be a police officer because she wants to fight the bad guy inside of her. But there may not be a tomorrow for her. The reason it scares us is the same thing — there may not be a tomorrow for us as well with the job that we have to do.”

Snow and Other Adventures

Abigail had never really seen snow. Southern Outdoor Dreams (SOD), a nonprofit organization, coordinates and gifts wishes to terminally ill children and veterans. SOD gifted the Ariases a ski trip to Jackson Hole, Wyoming. “It included skiing, all the snow she could have, drink and eat and swallow and bathe in. [SOD] made it possible.”

Abigail also went to Disney World and went on a Disney cruise. A man who heard about Abigail is coordinating a trip to see whales in Cape Cod, Massachusetts. Her family and others are now saving up money to take Abigail to the Disney resort in Hawaii.

A local motorcycle gang called La Familia, did a bike race for her and presented her with a vest. Lamar University in Beaumont made Abigail an “honorary cardinal.” She was able to sign a letter of intent that she was committing to them for a university. “I could go on and on,” said Ruben.

The biggest impact Abigail has had with her story, though, came through a Facebook post. A woman, a professed unbeliever, began following Abigail’s story on Facebook. “At the end of the day, she turned around and she ended up coming to Christ through my daughter’s story,” her dad explained. “I think that was one of the many times where God has slapped me in the face and said, ‘See look, bear with me. This is what I’m doing.'”

He added that although he’s her dad, God is her Father. “So, whatever her Father has for her in this lifetime,” Ruben is willing to accept. Even if it means the miracle doesn’t come. “Yes, we’re going to cry. Yes, it’s going to hurt. Yes, we’re going to miss her. But her job here on earth is done. And if it’s meant that that one lady came to Christ, then I’m good. We will see her in heaven.”

He’s amazed at how God has worked through his daughter. “We always give praise to God, we give Him all the praise and glory first in our family. Because, without Him, none of this happens.”

Abigail has taught her dad so much about living with her diagnosis. “It’s how to face your fears. Look fear dead in the eyes and just smile. And laugh. And love. It’s amazing how [I], as her 44-year-old dad is supposed to be teaching her, but I think she’s taught me more in a few years than I have in her 6 years of life. What it is to smile at a critical moment in your life when you have something that could potentially take your life and just to look and smile and be an inspiration to people and love. Anywhere she goes she smiles, she skips, she hops. It’s a beautiful thing to watch.”

Ruben hopes to be an inspiration to those around his family. People can “look at our family and say, ‘Hey, you know what? No matter what the challenge, they keep their faith.’ Because we keep our faith, we keep on smiling.”

Regardless of the outcome, Ruben knows God’s in control. “No matter what medicine they gave her, no matter what doctors prescribed, no matter what they say, we knew in our family that the end result was going to be that of God’s decision. We know that it’s His destiny, it’s His will. We know that He didn’t give her the cancer but He can definitely take it away from her. That’s where we’re resting now, deeply in deep prayers.”

Ruben has asked that people pray for his family as they walk through this experience. “One is obviously for the miracle that we’re searching for, that God hears our prayers. Each prayer that we get is just one more prayer He sees. Just pray for her that she keeps a smile. Pray for us that we don’t let fear overtake us and that we stay strong and we also continue to keep our faith no matter the challenge.”

Joy Break: A Young Cancer Survivor Gets a Standing Ovation at School After His Final Chemo Treatment