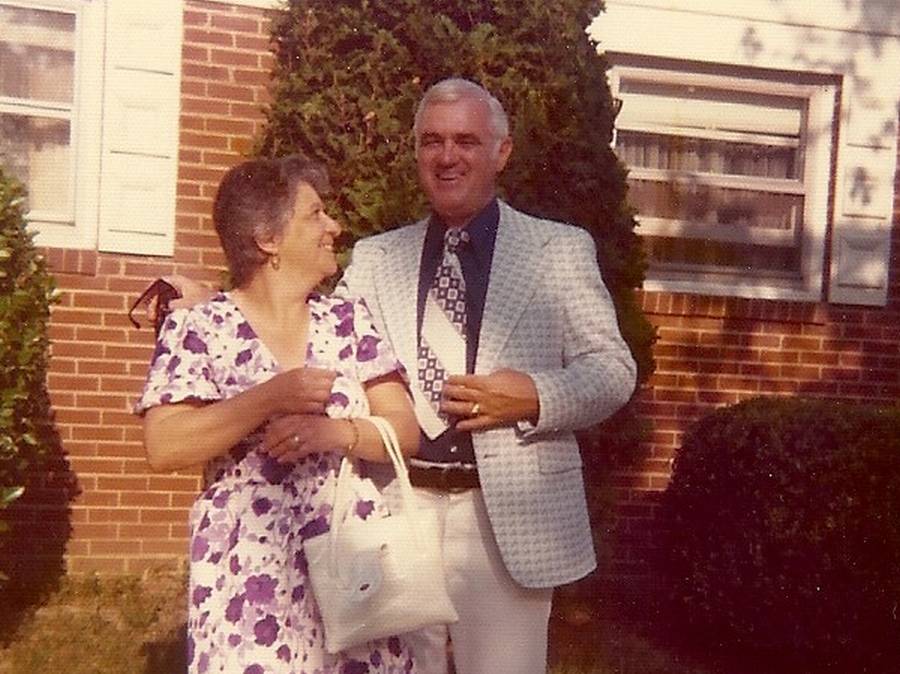 The ever-in-love couple, my mom and dad, in the mid-70s. But the clothes gave that away, didn't they?

Or so I came to believe. Christmas 1978 was spent in a waiting room at Malcolm Grow USAF Medical Hospital on what is now called Joint Base Andrews. Through the double doors, a few rooms down, my father was taking his final breaths.

I did not see him. Mom was apparently trying to “protect” me from seeing to what extent cancer had savaged my once-strong and striking hero. My last memory is of bones, wisps of hair and pictures I’d seen of Holocaust victims. How many days before Christmas that had been … I don’t know. I don’t even remember going home that Christmas night. Just the waiting room and the approaching gloom.

I remember getting up and out of habit flipping on the radio. Out blasted Billy Joel’s “Only the Good Die Young.” (A cruel taunt of the Enemy. Singing in my ear that I, too, would die young — leaving those who loved me shattered.)

Death and More Death … But Life

I’ve written before of the darkness and devastation that consumed me after Dad’s death. The family that helped sustain me. The faith that came to claim me. The tie between Christmas and death which has never left me. (Doesn’t everyone write a Christmas musical featuring the Massacre of the Innocents?)

Yet, on this 42nd anniversary of Dad’s death…. And the 41st anniversary of my grandmother’s Christmas death…. And remembering the deaths of other friends, like the husband of a high school friend who died of cancer at age 55 …. I am feeling less sorrow and more in the mood to spit in Death’s eye.

Oh, Death, how much have I let you steal over the years. Fear of your effects cost me dearly in love. Unresolved grief cost me incalculably in happiness. Fatalism wrecked ambition. Frivolity as an escape from feelings dictated my creativity.

“Yes, your stories are enjoyable,” the college professor said, “But I know you are capable of much deeper.” I remember thinking that the last time I went “deep,” Dodie read it and was a heaving, sobbing mess. That scared the living daylights out of me. I vowed to never let mom see that story.

Funny thing. A copy of the story turned up in her cedar chest after her death. She had somehow gotten hold of a copy and read it. And, how about that, the sky did not cave in. The shadow of death is dark. But it is just a shadow.

In recounting Herod’s massacre of the innocents, Matthew cites Jeremiah 31:15. That’s “Rachel weeping for her children, for they are no more.” Yet even in this horror there is hope. See what Jeremiah says next. The prophet goes on to give a spurning kick to death and a rallying cry to those who grieve:

This is what the Lord says, “Restrain your voice from weeping and your eyes from tears, for your work shall be rewarded, declares the Lord.”

Bethlehem knew weeping. But it also knew a savior had been born. A savior who would go on to conquer the grave.

O, death where is thy sting now?

Yeah. It’s the day after Christmas, but it’s a good day to remember that on Easter, death got punked.

On this anniversary of Dad’s death, after so many years spent too often in the emotional wilderness, I find myself drawn to Psalm 40.

I waited patiently for the Lord;
he turned to me and heard my cry.
He lifted me out of the slimy pit,
out of the mud and mire;
he set my feet on a rock
and gave me a firm place to stand.
He put a new song in my mouth,
a hymn of praise to our God.
Many will see and fear the Lord
and put their trust in him.

Dad was always singing. (In fact, he was one of the original “Singing Sergeants” in the Army, then Air Force.) It’s a trait I picked up. But what song should I going around singing? The old song put in my mind by the enemy? Or the new song put in my mouth by God? I know which one Al Sr. would enjoy.

Sorry, Billy Joel, but this new song has a much better tune … and you can dance to it.