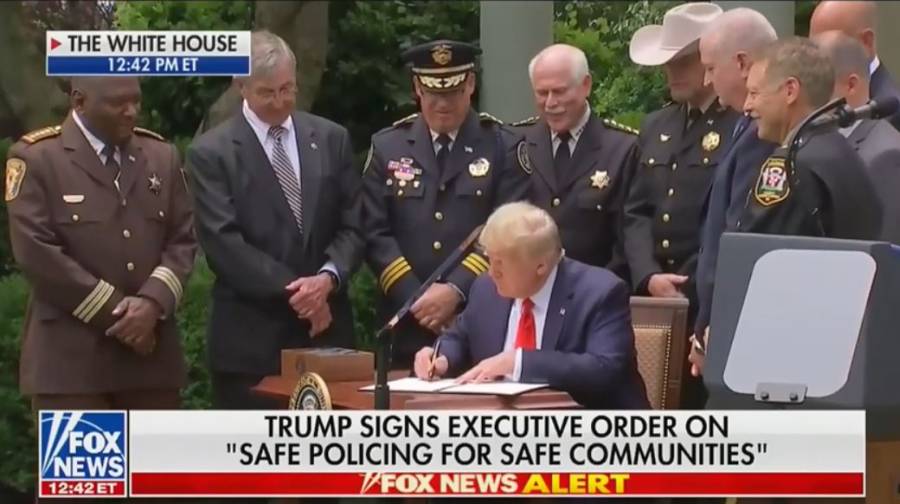 “Reducing crime and raising standards are not opposite goals,” President Trump said Tuesday as he signed a new Executive Order promoting police reform.

Speaking from the Rose Garden, Trump said he’s aiming to “deliver a future of safety and security for Americans of every race, religion, color or creed.” With the Executive Order dubbed “Safe Policing for Safe Communities” Trump is calling on police to reach for the “highest and the strongest professional standards.”

The President strongly defended America’s law enforcement officers amid today’s anti-officer hysteria, and decried the “defund the police” madness. He cited the violent protests as “radical and dangerous.” “Americans know the truth,” he said. “Without police there is chaos. Without law there is anarchy and without safety there is catastrophe.”

He hopes his reforms will help “build trust.”

“Safe Policing for Safe Communities” will “help law enforcement build trust and effectively serve the community as our first line of defense here at home,” the White House said. The E.O. has three main components:

The President wants to move quickly on the idea of partnering police with mental health workers and other social service professionals. HHS Secretary Alex Azar has been ordered to submit a report within 90 days offering recommendations on how social workers could pair with responding officers. Notice this is not sending social workers out on 911 calls instead of police as some are advocating. Instead, they roll out in partnership with police.

The Executive Order also calls for legislative action. And Congress is already on the move.

Sen. Tim Scott is working to craft the Senate GOP’s legislation. The only black Republican senator has been regularly consulting and advising the president. His package will reportedly include new restrictions on police chokeholds, greater use of police body cameras, among other provisions.

The House is expected to vote next week on its sweeping proposals. Though a battle is brewing there between young Antifa-friendly squad members like Rep. Ilhan Omar who wants to defund police departments and older congressmen like Rep. Jim Clyburn, who understands the danger.

The House bill from Democrats also wants an end to choke holds and create a national database of cops who are repeat offenders. However, Democrats are also calling for an end to qualified immunity and certain no-knock warrants. As a “first step.” “We cannot settle for anything less than transformative structural change,” Speaker Nancy Pelosi said Monday.

Still, it looks like a bipartisan reform is possible. Trump wants to see it, but not at the cost of the safety to Americans of all races.

We have to find common ground. But I strongly oppose the radical and dangerous efforts to defend, dismantle and dissolve our police departments, especially now when we achieved the lowest recorded crime rates in recent history.

“These are incredible people … and it’s so sad. Many of these families lost their loved ones in deadly interactions with police. To all of the hurting families, I want you to know, all Americans mourn by your side. Your loved ones will not have died in vain. We are one nation. We grieve together and we heal together.”

You can read the entire Executive Order on Safe Policing for Safe Communities here.