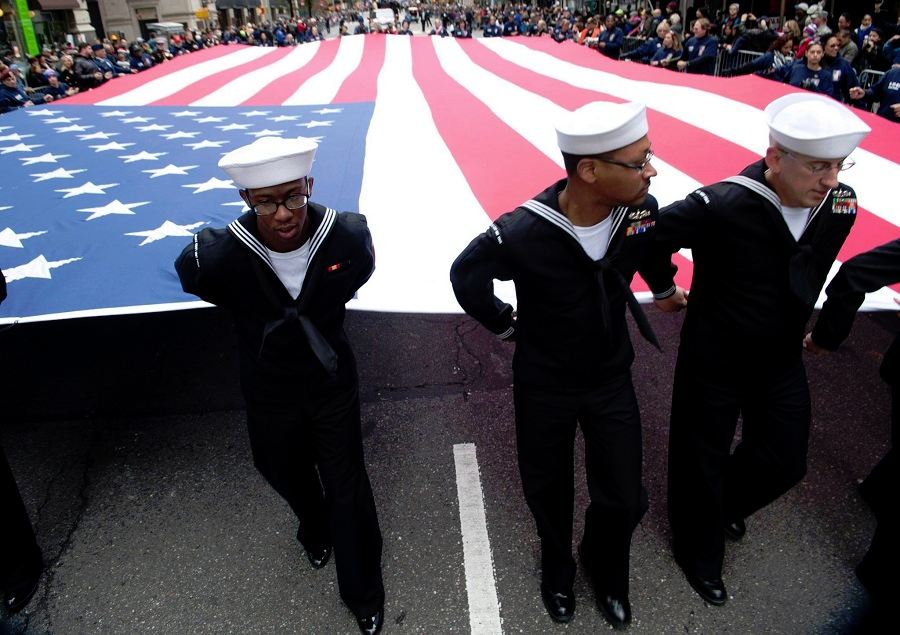 Every Veteran’s Day since I moved to Dallas, I devoutly attend the city’s parade. That was easy, my first few years. I lived downtown on Main Street and it marched right past my building. But things happen, life goes on, and you rescue beagle twins who get you evicted.

You know how it goes. Now I live miles away. It will mean a special effort to get down to the parade. But I’m going to make it. And I hope you make it, too, to your local celebration. Just a few thoughts today on what it means.

Why is it so natural, easy, and right to stand by the side of the road and cheer as high school bands and drill teams caper down Main Street? What unites you with your neighbors (those of the cloying “Beto” bumper sticker on the back of their pricey new Teslas)? And makes your differences fade?

What Are You Crying About?

Why do you choke up a little as serving soldiers and recent veterans march by, most of them fit and healthy? What fills your chest with warmth and your eyes with tears as middle-aged veterans of the Gulf War ride in gaudy Cadillacs with longhorns glued to the front? It gets even harder to keep it together when men who served in freezing, forgotten Korea pass you by. The high point, these days, of course, is when the few remaining men who served in World War II at last appear. (My father served with them, but he sleeps in a veterans’ cemetery these past 14 years.)

Imagine if we treated veterans according to our opinions about the justice and wisdom of each war’s merits.

When these the eldest, and last, of the veterans go by, I always think next of the soldiers from World War I. When did the last Dallas survivor of that nightmarish war march down Main Street? Was it back in the 1970s, or 60s? I visualize the years when veterans of the Spanish-American War still graced the parade, which was still called Armistice Day until the 1950s.

And what of the Civil War? Think of the famous reunion of aged veterans both Union and Confederate in 1913, on the 50th anniversary of the Battle of Gettysburg. Men from both sides of that battle gathered in two lines on the battlefield. They marched toward each other, as they once had in anger. In fact, the event climaxed with a reenactment of Pickett’s charge. But this time the soldiers shook hands, embraced, and wept.

That poignant reunion and reconciliation helps answer the questions I’ve raised. When the Union and Confederate veterans gathered in 1913, they weren’t convening to hash out the Civil War’s merits. They were gathering as Americans, and fellow survivors of a great catastrophe.

How to Rip Up a Country

Imagine if we treated veterans according to our opinions about the justice and wisdom of each war’s merits.

There being few survivors of U.S. wars before that, they wouldn’t be subject to our takes on whether Wilson lied America into the First World War. (He did.) Or whether the Spanish-American War was foolish imperialism. (It was.)

The long-ago Civil War? We’re still re-fighting that, whenever some demagogue demands that we tear down historic statues, or close down Confederate cemeteries. The urge to airbrush and erase the past flows from the craving to control the present and rule the future. (For my case against tearing down any statues at all, read this essay, which I wrote as a speech for a GOP senate candidate who lost his nerve and never delivered it. He lost anyway.)

We could go back and argue whether the Mexican War, or the Indian wars, or the War of 1812, or even the Revolution were “just wars” by Augustine’s exacting standards.

In other words, we could tear ourselves and our society apart.

Or we could admit something that makes ideologues of left and right alike kind of squeamish. That a nation is a big, extended family. That we love and cherish our fellow citizens in ways that we don’t feel toward foreigners. That’s healthy, natural and right. The alternative? Choosing whom we care about based on religious, ethnic, tribal, or ideological standards. And that’s the royal road to civil war.

Anyone who served in a U.S. armed conflict, however ill-conceived, is specially kin to us. He deserves our gratitude. Because what he really served was the long-term, worthy cause that is America. It’s a nation like any other, but it is ours.

Its ideals? We treasure them specially because we have grown up with them, or chosen them and sworn an oath to respect them. I don’t think I can objectively judge whether Anglo-Saxon individualism is better or worse than other traditions. No more could I step back and decide how the hymns I sang as a child, which still make me cry, compared to Syrian Christian chant. Or Chinese devotional songs.

When I gather with my fellow Dallasites to honor America’s veterans, for that day we’ll lay down our deeply held differences, and stand together as family. We’ll thank the living and honor the dead. And then we’ll get back to squabbling, which is what all families do.

Abortion in America Will End Badly, as Slavery Did