Was Jesus a Cave Man? Why Holy Sites in the Holy Land are Often Caves 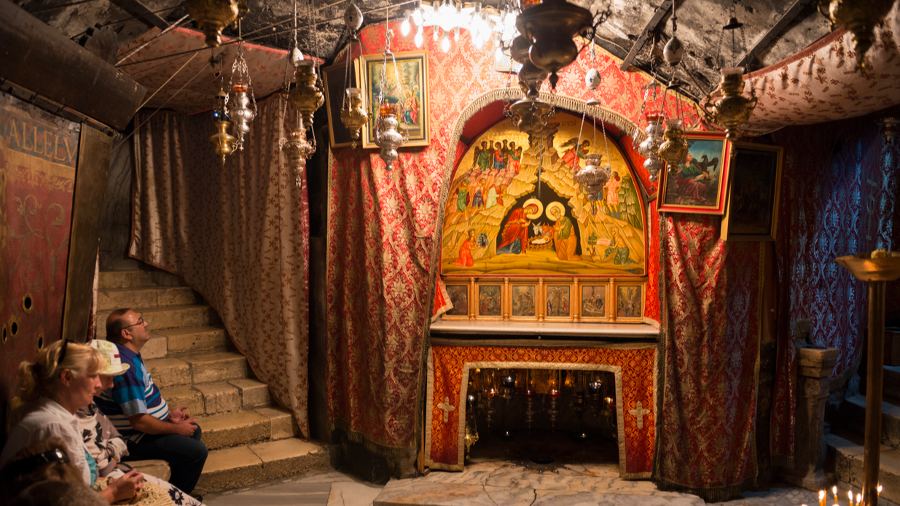 The two most important caves are the cave where Jesus was born in Bethlehem and the cave where his body was laid to rest in Jerusalem. “Why all the caves?” the modern traveler will ask. “Didn’t they live in houses? Was Jesus a cave man?”

However, when you visit Israel you soon learn that the countryside is very mountainous and the rolling hills of soft limestone are pockmarked with caves. Go into one and you realize, in the unremitting heat, living in a cave is not such a bad idea. It’s cool in the summer and (if you have some animals in there with you) it’s warm in the winter. Sure, it’s a bit dark, but you’re not spending time there during the day. It’s mostly just a place to sleep.

Their single room would usually be supplemented with a small extra room reserved for guests. The family would live in the single room house, and use the cave to house their animals.

While visiting Bethlehem our guide took us to visit a Bedouin shepherd family and our host took us to see the remains of an old cave house. The cave was hollowed out of the hillside, and our host explained that in front of the cave the family would have built a simple one roomed house. Their single room would usually be supplemented with a small extra room reserved for guests. The family would live in the single room house, and use the cave to house their animals.

The Cave/Stable Where Jesus was Born

Bethlehem today is a bustling modern city on the side of a hill. At the time of Jesus’ birth it would have been a settlement of simple cave houses. Once they arrived in Bethlehem, Mary and Joseph would have gone to the home of Joseph’s extended family. As they didn’t have space in their guest room, they offered the stable/cave as a place of shelter for Mary and Joseph.

A visit to Bethlehem today includes a visit to the ancient church of the Nativity built in the sixth century on the site of an earlier church from the fourth century which was built there because the first Christians remembered the cave house where Jesus was born.

A visit to Jerusalem includes a stop at the Church of the Holy Sepulcher. A little house has been built around the tomb of Jesus which was also a cave carved out of the hillside. It is difficult to visualize the present edifice as a cave tomb, but if you go into a small chapel just behind the tomb of Jesus, it is possible to see first century cave tombs in the original stone hillside.

So was Jesus a cave man? He was not a grunting, semi-human Fred Flintstone, but he did live in a culture where it was normal for people to live in caves, and a visit to the holy land of Israel and Jordan allows you to visit those very same caves today.

Fr Dwight Longenecker writes from Jerusalem where he is living and working as part of a two-month sabbatical. Read his blog, browse his books and be in touch at dwightlongenecker.com