Want to Save Democracy Today? Kick the Legs Out From Under the Ruling Regime!

Hint: This holds true for whoever is the ruling regime. 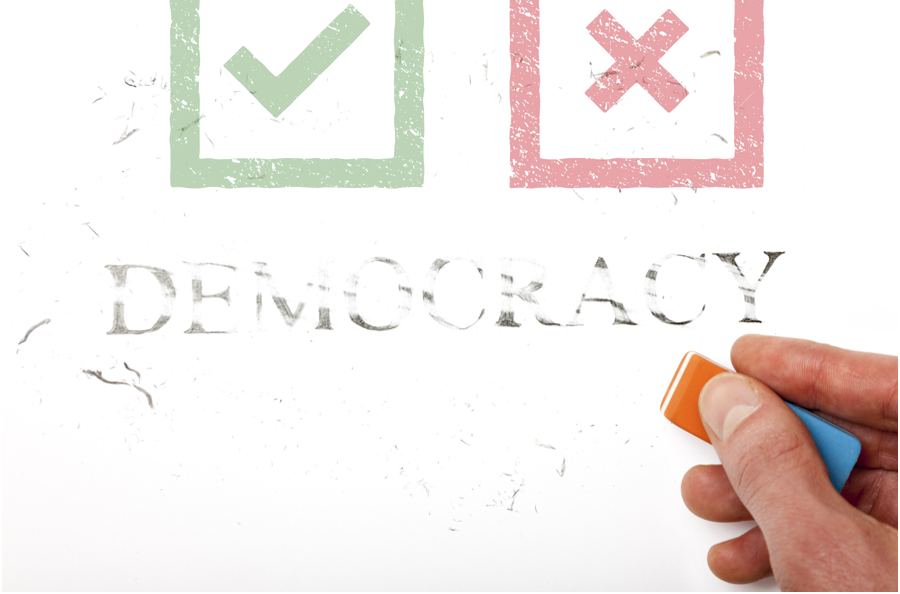 Our president says democracy is under serious threat. He’s right. He says the way to protect it is to keep the other party out. He is wrong — except, funny thing, I almost feel uncomfortable calling it wrong. It’s true, but it misses too much of the truth. Better to call it what it really is: Dangerous. Divisive. Inflammatory. And idiotic. It may be the most stunningly stupid thing I’ve ever heard an American leader say.

He want us believing democracy is only safe if we lock in one party to rule, and shut the opposing party out completely. He got that exactly backwards and upside-down. It couldn’t have been more obviously wrong. You need not be Republican, Libertarian, or independent to see how wrong it is. It should be equally obvious to the Left. All it takes is a little common sense. All it takes is not being stupid.

In the long run there are only three viable threats to democracy. The first is foreign invasion. (I have much I could say about that in today’s political context, but I’ll withhold that for now.) The second is a failure of free, honest, and open elections. The third is a failure of checks and balances.

Let’s start with elections. Donald Trump and other Republicans claimed the last election was rigged. Joe Biden and the leftist media call that claim a threat to democracy. That’s laughable. The redress Trump called for wasn’t, “Call it rigged and declare me the winner.” It was, “Call it questionable, investigate it carefully, and find out who really won.”

Somehow the power elite found that unworthy of anything but scorn. “The courts all ruled against it,” they said, even though the vast majority of such rulings were based not on the merits of the evidence but the standing of the plaintiffs. And besides that, since when have real journalists been content with judges deciding such things?

It may be the most stunningly stupid thing I’ve ever heard an American leader say.

Who’s putting democracy at risk? But mainstream journalism is part of the ideologically one-minded power elite. Conservative journalists have investigated and found evidence of election fraud. Mainstream media laughed and called it one-sided and biased. Courts have since ruled many of the election changes made in swing states in 2020 were illegal. The media snickers and turns away.

Laughter and name-calling do not constitute journalism, and they do not display neutral objectivity either. It only demonstrates that there is no such thing as journalism there. They’re definitely not holding liberal leaders accountable. Mainstream media is just as big a problem as the politicians.

CNN ran a fact-check of sorts on Biden’s latest political speech. Good for them. It was at least a semblance of media accountability: They caught him in some real howlers. They missed the big one, though, the one I’m talking about here: the threat to democracy if anyone takes Biden seriously.

This is exactly what Biden is urging upon us, though: One party controlling Washington, ideologically joined at the hip with power centers in media, law, and education. Leftist or rightist, that kind of single-party, single-ideology rule is the very essence of authoritarianism.

Why Don’t They See It?

This is no dark anthropological secret. This is “everyone knows it” material. I can only think of three exceptions, three groups of people who would have trouble grasping it. There are some with very limited capacity for common sense. Some have common sense, but it’s uninformed due to utter ignorance of human history and civilization. The third group are those who don’t want to know it because the knowledge threatens their own power.

I am convinced many in this third group only pretend not to know. The rest of them may also be part of the first group: Their lust for power has put a dark cap over their ability to see what everyone else can see. I’m also sure it’s no coincidence that they’re doing their level best to control or even prevent the teaching of history to the rest of Americans.

For two years now we’ve been under one-party rule, not only in Washington but in all the country’s major power centers, especially the media (which everyone can see just by looking at it) and federal law enforcement (which be equally obvious if the media weren’t complicit in hiding it).

The left believes in “diversity,” or so they say. Good for them, up to a point. Diversity in race, color, sex, and life background can add insight and effectiveness to some teams. “Diverse morality” means immorality, however, and “diverse competence” means incompetence. (At least our president ticks one of those boxes.)

Where diversity matters most, however, is in a nation’s power centers, and the form of diversity that matters most there is in these influencers’ thinking on social values, economics, national security, and the like. Our republican form of democracy has worked here for well over two centuries because of our checks and balances, but those checks and balances only function where there’s at least some disagreement. Otherwise instead of balancing, the powers will reinforce one another at the expense of the people.

This is no “Republican problem” or “Democratic problem.” It is the human condition. Unchecked power is dangerous power. The Democrats stand in a more dangerous position now, though, for their guiding ideology stands in control of so much more than politics.

If Republicans held that much power across that much of American culture, I’d be urging Republican voters to toss out some of their own and replace them with Democrats — not because I like Democrats, but because I like democracy. In fact it is the Democrats who have that power now. If you are a Democrat voting today, I urge you to replace some of your own with Republicans. Or Independents, or Libertarians, if you can’t go so far as voting in a Republican.

You don’t have to like Republicans to see this as a good idea. It’s enough if you dislike living under a single ruling regime. Vote them out. Kick the legs out from under them. Vote them out!

Is Tucker Carlson a White Supremacist?