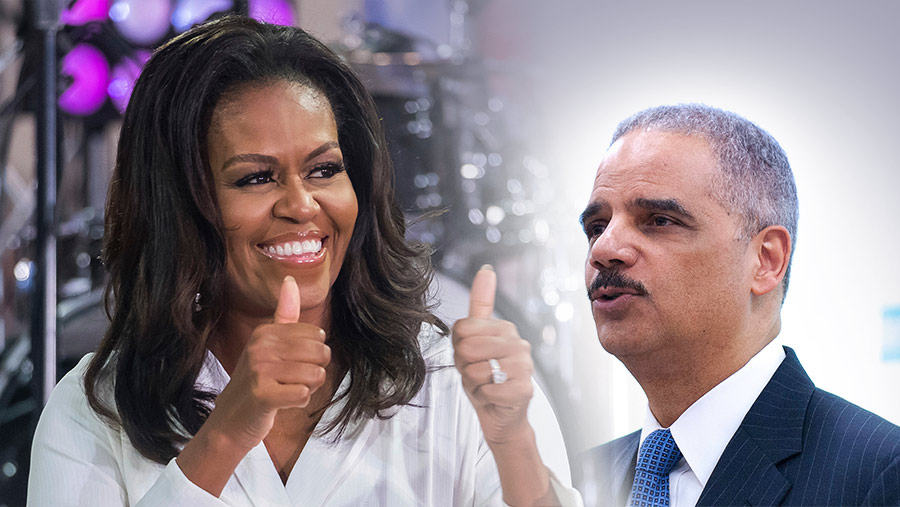 #Walk Away, Michelle! Walk away!

Former Attorney General Eric Holder is basically telling her, “Sit down and shut up.”

During a campaign appearance Holder said, “Michelle always says that, you know, ‘when the go low, we go high.’ No. When they go low, we kick them. That’s what this new Democratic Party is all about.”

Holder’s remarks comes as a wave of left-wing violence soaks our land. Just yesterday news broke that a New York man upset at the “direction of the country” was arrested for planning to detonate a 200 pound bomb in Washington on Election Day,  We also learned that the son of Obama’s National Security Adviser Susan Rice was assaulted at Stanford over his support for Brett Kavanaugh.

A Stream story on Hillary Clinton’s rejection of civility lists many more. To refresh:

… ricin was sent to the White House and Pentagon.

… hordes were screeching, clawing, banging at the Supreme Court doors.

… a decapitation video was sent to the wife of Sen. Cory Gardner after his vote for Kavanaugh.

… a congressional staffer doxxed opposing senators. (And when a witness threatened to expose him, he threatened to dox their children.)

… a pro-choice protester gave a pro-life woman a roundhouse kick to the head.

… a Trump-supporter’s truck was firebombed.

It’s one thing for Hillary Clinton to reject civility. She’s always been a vicious political thug, she’s still bitter over losing to Trump, and so desperate to stay relevant she’d say “up is down” if it meant keeping with the day’s political fashion. And the top fall fashion is “resistance at whatever bloody cost.”

However, Eric Holder is the former Attorney General of the United States. He was America’s top law enforcement official. When your former top lawman, in this atmosphere is calling out the jackboots, you’ve got problems. As President Trump said, “That is a very dangerous statement.”

But let’s look on the bright side. At least Holder isn’t someone with a history of arming violent criminals. Oh, wait. Yes he is. (Fast & Furious, anyone?)

To her credit, Michelle Obama didn’t wait long to stand up to Holder. Obama was asked this morning on NBC’s Today if her motto, “When they go low, we go high” still stands. “Absolutely,” she said.

God bless you, Michelle Obama, for saying that. And now, ma’am, the bad news. You are now far too moderate for this “new Democratic party.”

You sound like the verse from Jeremiah. “‘Peace, peace,’ they say. But there is no peace.” To the hysterical mobs marauding around the country your call to “go high” sounds like the parents in a Peanuts cartoon.

On places like CNN and MSNBC, you can’t even call a mob a “mob” without being shut down. (Warning: Some foul language)

SUPERcut of reporters telling people to not use the "mob" word cut with video of the mob. pic.twitter.com/o2tgNZMEv5

But There Is Good News

But there is good news. More and more Democrats and Independents are watching the madness and saying, “This just ain’t right.” Polling shows Independents are repulsed by what they saw the past couple weeks. Republican candidates are suddenly competitive even in races that are supposed to be sure things.

In the California governor’s race Democrat Gavin Newsom’s lead over Republican John Cox has been cut in half. And that was even before the Kavanaugh ugliness and Newsom announcing he wants to give free health care to any illegal immigrant who makes it to the Golden State. (It also doesn’t count the California voters who would never admit they’re not going to vote Democrat.)

More broadly, consider the #WalkAway movement. Each day, more self-described Democrats and liberals are walking away from this “new Democratic Party.” #Walk Away founder Brandon Straka tells One America News Network his movement got a “second wind” from the Kavanaugh hearings. “Thousands of people” are coming in.

The #WalkAway March and Rally will take place in Washington October 26-28.

Will you be there, Michelle Obama? Or will you fall back in with those party leaders calling for unrest? You stood up today. Don’t vote “present” tomorrow.

When the Left Objectifies Women

The Mysterious Disappearance of Melania