The Vote That Shocked the World: One Year Later 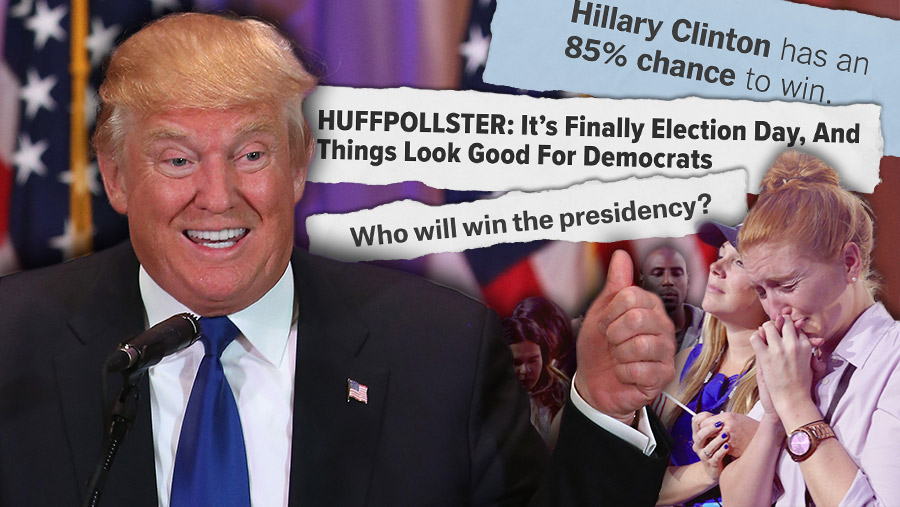 On the morning of November 8, 2016, Americans woke up to the 71.4% probability that by night’s end Hillary Clinton would be elected President of the United States. New York Times had it at 85%. Huffington Post had it at 98.2%.

It was such a sure thing Clinton was already signing Newsweek magazine covers declaring her “Madam President.” State Department workers overseas had already created Trump pinatas for the expected victory party. The champagne was being cooled. Bill was rummaging through intern resumes.

About the only people who warned of a different result were filmmaker Michael Moore, Dilbert creator Scott Adams and Christian speaker Lance Wallnau.

My own thinking on Election Day: If Trump’s polling put him near the margin of error Election Day he very well could pull it out. I was convinced not only that pollsters were offering skewed poll results, I knew there was an army of closet Deplorables out there who were not about to tell anybody what they were planning. Not even exit pollsters.

Also, it had become clear to me by the third debate that America had decided it really didn’t want Hillary Clinton to be president. The voters were just not that into her. The only question was “Do we take a chance on the loudmouth billionaire?” That’s why if you look back at the third debate Hillary is not a factor. She might as well have been sitting in a corner dictating the opening chapters of What Happened.

The first sign pollsters were set for serious egg facials came a couple days before the election when Hillary cancelled a huge fireworks show planned for election night. Hillary would be out millions if she lost and didn’t get to light up the New York skyline. Turns out election night provided its own fireworks.

The polls start to close. With exit polls in hand and smiles on their faces the networks were saying Florida was heading Hillary’s way. If true, it would be a short evening. Rachel Maddow and her MSNBC cohorts seemed peppier than a glee club on helium.

I ran up the road to Chop House Burgers to grab some take-out. If I didn’t have truffle fries election night then the terrorists win. The TV’s were tuned to election coverage, sound off. I caught a glimpse of MSNBC. Something was wrong. Rachel Maddow had a quizzical look on her face. Like someone had just told her the sky was not blue and she was awaiting confirmation. What’s going on?

I jumped in the car and the news was stunning. The actual vote totals in Florida were leaning Trump. We actually had ourselves a contest.

We still didn’t know if voters were going to Make America Great Again, but they were gonna make election night great entertainment. (And it was a doozy, as tweets from Stream writers that night remind us.)

I knew Trump had won when word came that the TV’s at Hillary’s victory party turned off CNN. I didn’t believe it, but I knew it. Sure, turning off CNN is something a vast majority of Americans do on a daily basis. But to change away from election results meant Clinton officials knew what Anderson Cooper was going to be telling Hillary supporters wasn’t good.

My confirmation came when I saw that Hillary sent out this tweet:

This team has so much to be proud of. Whatever happens tonight, thank you for everything. pic.twitter.com/x13iWOzILL

It’s sweet. It’s precious. But especially with polls still open, that wasn’t a winner’s tweet. That’s the tweet of the vanquished.

Oh, it would be hours before it was official. The blue wall slowly crumbled like blue cheese. The networks were refusing to call Pennsylvania the way the Brits refuse to call dentists. They simply couldn’t bear to declare the unthinkable: Donald Trump — the Apprentice guy — was President-Elect. Over on MSNBC, the talking heads looked as if Trump had beheaded their puppies. Their efforts to elect Hillary had failed. Dramatically. Spectacularly.

The glass ceiling didn’t shatter. But judging from what’s happened the past year, the psyche of the media did.

Pundits across Punditville dourly debated what Trump’s win meant. Well, it meant things were not going to be dull.

Across the pond, some British publication asked our John Zmirak to explain what the heck happened? John offered a 1,500 word explanation detailing the historic forces that had aligned, some of those forces dating back centuries. I’m not as smart as John. My answer was much more simple: “People just got tired of feeling guilty for saying ‘Merry Christmas’.”

The longer version is that people were plain fed up. Each election has a theme, an underlying force moving the electorate. The 2016 theme came straight from the movie Network: “I’m mad as h*** and I’m not going to take it anymore.” That’s why creaky, cranky socialist Bernie Sanders nearly overcame a fixed primary. That’s why BLM originally formed. That’s why a bunch of sturdy, smart politicians got their clocks cleaned by a rookie with all the subtly of a nuclear bomb.

The rest is familiar. The Democrats set out to declare the election invalid. They accepted the results with all the grace of death metal concert. Property was destroyed. Civility was destroyed. Worse, friendships were destroyed. Even a year later, whose heart doesn’t break over friends and family members who put one election result over years of loving relationship?

And doesn’t it all seem silly in a year that has seen three devastating hurricanes, two horrific massacres, and an inferno laying waste to the wine country? When people of all races, creeds and political persuasion are helping lift their brother citizen out of the floods or helping them sift through the ash?

Sure, the map is mostly red with pockets that a year later are still really blue. Sure, the media are still so focused tearing down Trump he can’t even feed fish without it being turned into an international crisis. Sure, some Democrats are already positioning themselves for 2020.

But today why not pause a second and enjoy the wonder of what happened one year ago. America was told by the swamp creatures and culture elites who their next President would be. And the American people said, “We’ll decide that for ourselves, thank you.”