Today, even the act of adornment must be validated by the pale light of politics. 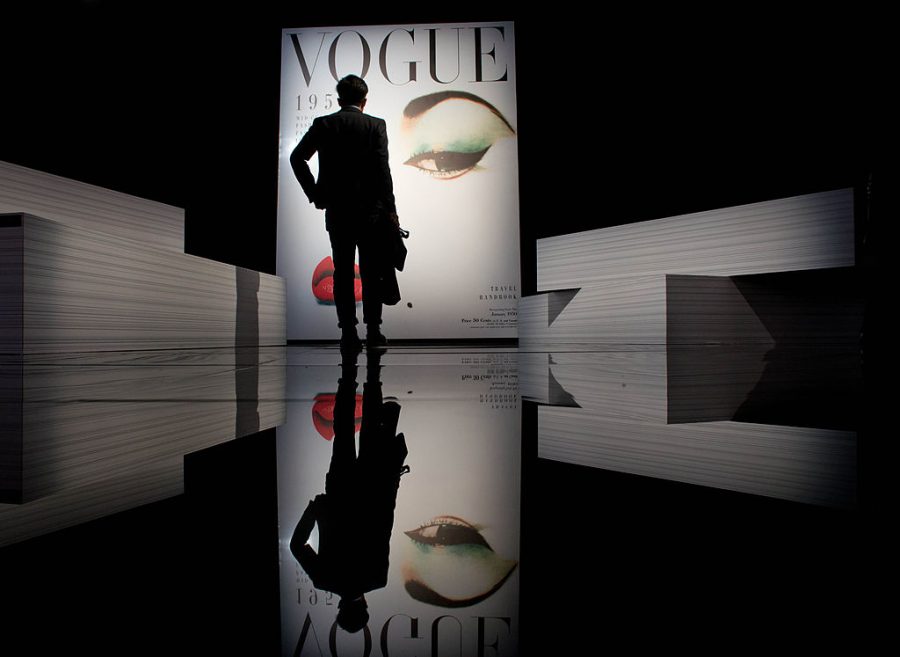 A man stands in front of an exhibit during an event celebrating the 120th anniversary of Vogue magazine, in Beijing on October 30, 2012.

The bus from D.C. dropped me off right in front of the Fashion Institute for Technology Museum in Manhattan. It was free so I stopped in for a look. A fun little exhibit called “Force of Nature” was showcasing fashion from pre-colonial times through today. If you ask me, the Fifties were to die for.

I enjoyed looking at feathered hats and dresses and handwoven silk brocade flowers: not just the physical beautiful, but the ideals they embodied, the cocktail parties they hinted at, the play of the senses and the sexes at work.

When I got back to the apartment, I googled the show. I wanted to share it with my sisters as a fun small thing to do on their next trip to Manhattan.

I found this review in Vogue magazine.

Women’s magazines have marched steadily leftward in my lifetime. By 2016 Vogue hit a new low in politicizing fashion. Anna Wintour’s dreams of an ambassadorship to the Court of St. James reached a fever pitch. As Noemie Emery put it, Vogue “seemed to grow thinner and thinner, to the point of looking like a campaign flyer for the DNC.”

Still I was astonished to see the depths to which Vogue and the fashion museum curator fell together:

As the 2015 climate change accord dominates the headlines again today, a new exhibition at the Museum at the Fashion Institute of Technology (FIT), “Force of Nature,” considers how fashion and textile designers have plundered, mimicked, been influenced, and inspired by Mother Earth from the 18th century to the present.

“My hope,” curator Melissa Marra-Alvarez tells Vogue Runway, “is that people see how nature informs design, and ways that we never could have expected that [that] might inform a new appreciation for the natural world and encourage people to care more about it, which is important especially today.”

Yes. By taking a few delicious minutes to revel in some fashion, feathers and furs, we can help the environment. That’s why people go to fashion shows!

What a bleak script our creatives must follow. Forced to exculpate their own interest in their gorgeous wares by politics. What a lack of faith in the value of beauty for its own sake — in the significance of the way human beings adorn, attract, interact. Heaven’s no! In liquidly modern Manhattan, justification is by politics alone.

Before justification we must atone for the sins of our ancestors. The script is stern. So Vogue burns a pinch of incense at that altar:

Too often, the desire to transform ourselves through clothing has come at the cost of natural resources; in the 19th and early 20th century, for example, millions of birds were sacrificed in the name of la mode, eventually prompting reform through laws like the Migratory Bird Treaty Act. Much work remains to be done in terms of protecting animals and the environment in relation to fashion production.

Even replacing natural fabrics with man-made ones takes on a certain cosmic significance:

I shudder to think of the carbon footprint biomimicry requires.

Joseph Bottum wrote a very interesting book on this phenomenon: The Anxious Age. “Their deepest awareness of sin … derives from their sense of a shadowy evil that lies over the past. Over much of the present as well.”

“Forces of Nature” is just one small proof of our young’s spiritual hunger for significance. A hunger so inverted against itself that even the act of adornment must be validated by the pale light of politics.

Dear Vogue, Allow Me to Explain My Interests