Vladimir Putin and the Road to Serfdom 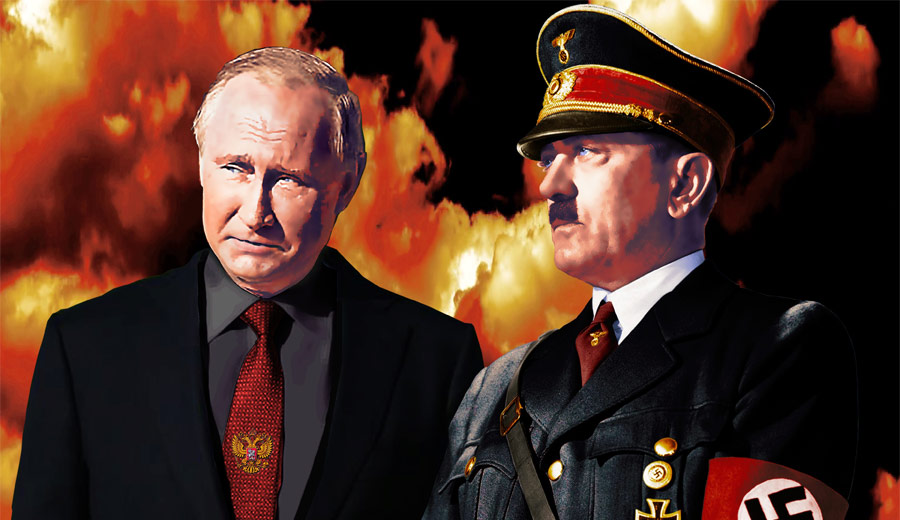 The great Austrian economist, Friedrich von Hayek, wrote a must-read book about creeping socialism in Europe leading up to World War II. It came out during the war. At the same time, he was a university professor living in England. He was frustrated by the confusion he found in his academic peers regarding social and economic concepts.

So Hayek wrote his most well-received book, The Road to Serfdom. He tried to pass on this foundational truth: fascism and communism are both socialism — and quite similar. His warnings about the totalitarian movements building in Europe seemed fruitless. Most of his colleagues believed fascism was a product of capitalism. Hayek insisted National Socialism is what it says it is: socialism.

Fascism Is Not Right-Wing

In the introduction, Bruce Caldwell describes how Hayek began his book: “It began as a memo to the director of the London School of Economics, Sir William Beveridge, written in the early 1930s, disputing the then-popular claim that fascism represented the dying gasps of a failed capitalism.”

Historically, in Italy, Germany and Spain, the communists and fascists were political rivals competing for like-minded people. The communists portrayed fascists as right-wing to demonize them.

Today, European and American elitists call fascists right-wing for political reasons. It seems their whole political spectrum is anchored by socialism. And they strategically want to disparage capitalism.

The truth is, communism and fascism are rivaling socialist siblings.

Hayek showed that not only does fascism not come from capitalism, it often springs from failing communism. He gave examples and quoted some ideological leftists who admitted it brokenheartedly. They acknowledged that the Utopian dream frequently became uncannily like a fascist dictatorship. What happened over time? Karl Marx’s futuristic predictions became the reality of Stalin’s Russia, Mao and Pol Pot.

In the real-world, textbook constructs collapse. Today’s China is a mishmash of communism and fascism, with private businesses dominated by the State. Vietnam is supposedly still communist. In reality, it’s a commercialized dictatorship. What do you call Putin’s Russia?

Hayek understood the mechanics, accurately observed human behavior, and saw the patterns many decades ago. The communists and fascists competed for the same followers. While the communists used class rhetoric, and the fascists racial or nationalistic jargon, they both ran expansionist dictatorships.

Mussolini, the world’s first fascist leader and Hitler’s archetype, was a leading Italian Marxist. Enthralled by the outbreak of World War I, he declared himself anti-Marxian. (Marxists opposed that war.) But he crafted a collectivist, totalitarian system to rival Marxism, using bits and pieces of Lenin’s program. He and his advisors created fascism out of Marxism. The truth is, communism and fascism are rivaling socialist siblings.

Hayek explained the interactions between the two parties in Germany: “And what is true of the leaders is even more true of the rank and file of the movement. The relative ease with which a young communist could be converted into a young Nazi or vice versa was generally known in Germany, best of all to the propagandists of the two parties.”

Something Hayek greatly feared took place about two years after he moved to England. The National Socialists won the election in Germany, and Hitler became Chancellor.

It is particularly rich that Vladimir Putin claims his goal is the denazification of Ukraine. Talk about the pot calling the kettle black. The Russian people are under complete political control — Putin’s police arrest protestors. Long prison sentences follow. He murders his political rivals with poison or other means. Not one parliamentarian voted to stop him from invading Ukraine. The Russian parliamentarians’ giving him the green light unanimously suggests their lives depended on it.

When Mussolini invented fascism, he described how the leader would decide for the country. Individuality dissolved into the state. Il Duce, der Führer, “the leader,” determined the will of the nation. It became a living being that subsumed all individuality. He called this the wave of the future. Putin’s sphere of influence is his imagined wave of the future. His will for Russia and those vassal states he controls through political puppet leaders is the fascism that failed Soviet Marxism has wrought.

Putin says that his Ukraine invasion is a defensive “special military operation;” it’s limited in scope to degrade the fascist state next door, to disrupt its ability to threaten Russia. But Ukraine only threatens his vision and ego.

Will the War End With Putin’s End?

Putin has done so much damage in Ukraine, it is beyond forgivable. The enormous number of apartments, schools, commercial buildings, shopping malls, government buildings, and private homes destroyed is astounding — not to mention roads, bridges, rail lines, seaports, and other infrastructure. There are thousands killed, left maimed, and made homeless. One man, “the leader” in Russia, did this and continues doing it to the Ukrainians. But what about the Russians?

Afghanistan was Russia’s Vietnam. According to PBS, Russia has lost 7,000 to 15,000 troops in Ukraine in four weeks. In Afghanistan, they lost 15,000 in ten years. Russia’s reported numbers are much less. But we know one thing for sure: their “leader” lies. Many experts say the actual numbers are somewhere in the middle. In any case, aren’t they already too much for the Russian psyche to absorb?

Is it enough to lose your soul to the state? Russia has a long history of serfdom. When will it strike Russians that they don’t need to be serfs anymore? Isolation from the modern world should hurt. One evil man has become their national mind. When will they decide they’ve had enough? How will parents react when so many of their 18- and 19-year-old sons come home so quickly in body bags? As others come home disfigured? Will the Russian military get sick of the abuse and revolt? Mussolini’s fate looks like a rough sketch for Putin’s future. I doubt he’ll get out of this with his life.

James Malloy is the author of Economic Clarity or Political Confusion: The Classical Cure for Keynesian Debt & Deficits. He has a B.S. in Business Economics and is an active licensed California Mortgage and Real Estate Broker of over 20 years.