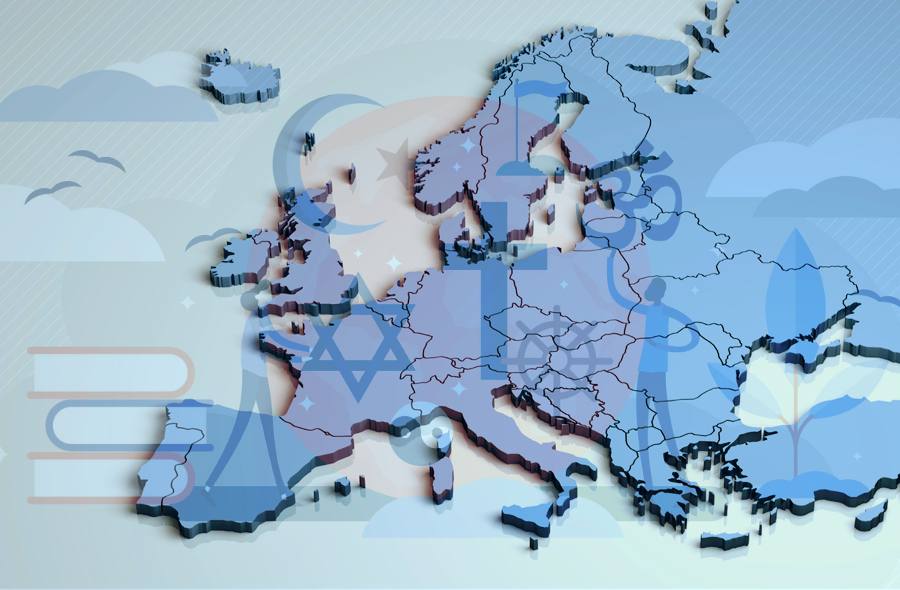 We are the Splintered States of America, but we are hardly alone in it: We live in the splintered fragments of Western civilization. What happened? How did we fall apart so? There’s a fascinating piece of the story that’s not often told. Based mostly in Europe, it’s a tale of how the Western world took up a uniquely Christian virtue, but carried it in seriously unchristian directions. We thought humility was a good thing, and it is; but not that kind of humility.

Humility’s virtue is so ingrained in us we forget how we came to honor it in the first place. Jesus Christ said “the meek shall inherit the earth,” and thereby upended an entire world’s impulse to glorify strength and power alone. Historian Bruce L. Shelley tells us Christianity is “the only religion to have as its central event the humiliation of its God.” Philippians 2:5-11 tells how the Father honored Him for it.

Jesus showed the goodness of humility, but never without truth, for truth was His mission, too: “The reason I was born and came into the world is to testify to the truth. Everyone on the side of truth listens to Me” (John 18:37). Today humility has overwhelmed truth, and where one virtue smothers another, both die. The Western world has rushed to reduce conflict by deferring to one another regardless of truth. See now where it’s brought us?

The Attack of the Proud

Religious “humility,” meant to draw us all closer together, has instead led to our splintering. I’ll pick up the story in the mid-19th century, when multiple lines converged to undermine the Western world’s connection to the truth. 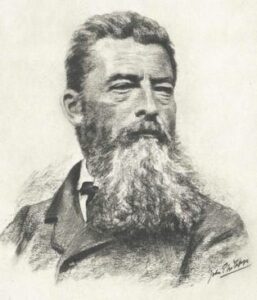 In short, the faith took a battering from these figures and others.

Pride Has Its Attractions

As an attack on Christian reason, it was all really quite feeble, built on a foundation of virtually no evidence whatsoever. Pretty much all of it’s been debunked over the past 30 to 60 years. (Darwin lives on, but only with the help of a respirator; his major brain waves have flat-lined.)

It was attractive because it was well-written and intellectually daring, when a move was already afoot to do the “courageous” thing and cast God aside. And who wants to believe in a God who’s only a projection, only wish-fulfillment, only an imagined father-figure? Nineteenth-century skepticism got a hefty boost from nineteenth-century intellectual pride.

No country can maintain a shared temporal purpose without a shared larger purpose.

We’re not yet in the part of the story that has to do with humility, obviously. When it comes, it looks a lot like a continent retreated in shame from its pride, and not just intellectual pride. Europe (aka “Christendom”) was the “superior” civilization, and not just for what it had accomplished. Europeans were biologically superior, the only fully human beings on the planet. Darwin himself said exactly that in The Descent of Man. Richard Weikart has documented how Ernst Haeckel, Friedrich Nietzsche, and even the composer Richard Wagner carried that idea forward, until it landed in the speeches of Hitler and the gas showers of the Nazis.

And of course Europe was the land of science and exploration and art and colonization and diplomacy, all still under the umbrella of Christendom. But this Christendom had turned from Christianity to mere egotistical pride. There were exceptions, of course. Even a scientist as famous as Michael Faraday was a thoroughly committed, practicing believer. Reform movements cropped up here and there: Methodism in England, Pietism on the Continent, the Great Awakenings in America. 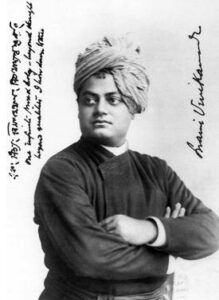 It wasn’t enough to halt the inevitable, though. It may be that God personally directed Europe’s humiliation, for He has no patience with pride or with lies; or He may have merely let events run their course. Either way Europe and its descendants were due for a humbling. If only they’d taken the right lessons from it!

One great lesson they learned wrongly was humility in the face of other religions. Improved travel and communication were bringing Christendom into much closer contact with the world. Swami Vivekananda wowed Westerners at the first World’s Parliament of Religions, held in Chicago in 1893.

The West had only known Christianity, or distorted Christianity (deism, for example) or anti-Christianity; either way, it was always about Christianity. Now they could see what’s come to be called the “wisdom from the East,” as on the left side of the photo here, where Vivekananda wrote, “One infinite pure and holy — beyond thought beyond qualities I bow down to thee.” It sounds worshipful enough; to many it seemed spiritual enough, though it’s a far better description of an Eastern religion’s “one” than of the Christian God.

Western civilization had let loose of its Christian confidence. It began seeing the rest of the world in a more positive light. And then came the humiliation of World War I. Up until then, Europe had been able to maintain the fiction of moral superiority. This was hardly the first time they’d tried to obliterate one another in battle, but it was the first time when events combined to make it such an embarrassment in the eyes of the world.

From False Pride to False Humility

So Christendom was humbled. Time passed, and Western culture embraced the humility. We had seen the other religions, we had come to doubt the Christian faith on which we’d built our civilization, and we decided the humble thing would be to embrace all religions as equal: equal in value, equally to be practiced, with equally good effect. In the process we rejected Christ, the One who had introduced a proper, truth-based humility to the world; the only One who could show how to keep that virtue in proper bounds.

Pride led to our downfall. Humility will, too, if by “humility” we mean accepting the obviously self-contradictory belief that all religions are equal in that way. Humility tied to a lie is no wiser, no safer, than pride tied to a lie. Christian humility does not mean denying Christian truth; or as G. K. Chesterton said it (much better than I ever could!)

But what we suffer from to-day is humility in the wrong place. Modesty has moved from the organ of ambition. Modesty has settled upon the organ of conviction; where it was never meant to be. A man was meant to be doubtful about himself, but undoubting about the truth; this has been exactly reversed. Nowadays the part of a man that a man does assert is exactly the part he ought not to assert—himself. The part he doubts is exactly the part he ought not to doubt—the Divine Reason.

Can We Do Better?

I started by saying this was part of what had made us the Splintered States of America. No country can maintain a shared temporal purpose without a shared larger purpose. We’ve lost track of that larger purpose, and it’s tearing us apart.

Could Europe and the West have done better? Could we have maintained a truly Christian identity in a world of differing beliefs? And if so, how? I do not know. I look at history and I see many lessons but few success stories. Pastor Timothy Keller has commented somewhere, though, that if there is any belief system that ought to be able to hold its own while living in peace with others, it could only be the one whose Founder taught His people to love their enemies, to live in true humility, and never let go of the one Truth that alone can lead us to live in such love and humility.

I’m convinced therefore that if Christendom had been truly Christian it would have come out better for all. It’s an experiment I’d love to see someone try somewhere. I’d gladly sign up for it. The nearer the better, and the sooner the better.