Vikings Beat Saints With ‘Minnesota Miracle’: QB Says It’s His Third-Best Moment of His Life Behind Becoming a Christian and Marrying His Wife 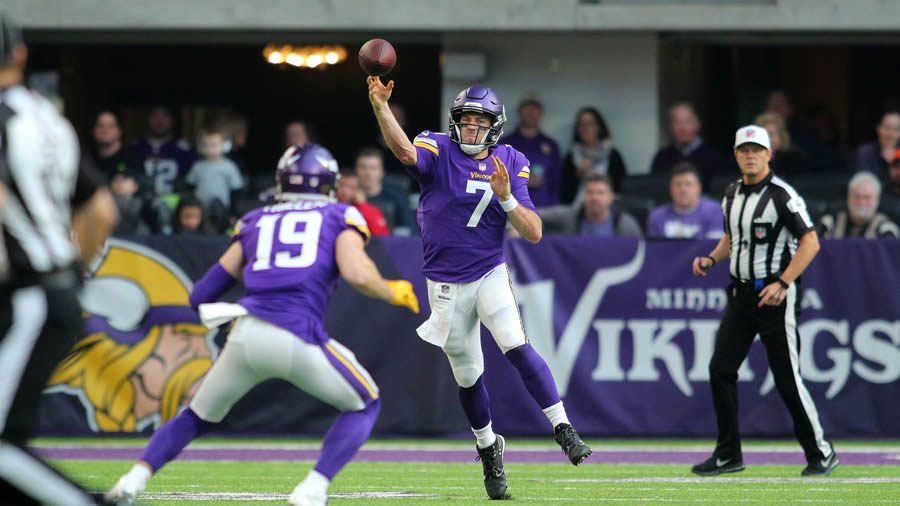 MINNEAPOLIS, MN - DECEMBER 31: Case Keenum #7 passes the ball to Adam Thielen #19 of the Minnesota Vikings in the second quarter of the game against the Chicago Bears on December 31, 2017 at U.S. Bank Stadium in Minneapolis, Minnesota.

The Minnesota Vikings won the divisional round matchup against the New Orleans Saints in what is being called the “Minnesota Miracle.” With 10 seconds left in the game and down by one point, quarterback Case Keenum threw a 61-yard pass to wide receiver Stephon Diggs. Diggs leapt for the ball just as the Saints’ Marcus Williams went in for the sack. Williams rolled under Diggs and Diggs quickly turned and ran toward the goal for the touchdown. The Vikings won 29-24.

As the crowds went wild, Keenum was interviewed following the final play. “This is unbelievable,” said Keenum. “God is so good. I mean, it’s unbelievable what He’s done.”

In a separate interview, Keenum added, “If you ask me about this moment, what this moment has meant to me, it’s probably going to go down as the third-best moment of my life behind giving my life to Jesus Christ and marrying my wife.”

“It’s a storybook ending — and it never ends that way,” said Diggs. “Usually, it’s reality. It’s real life. Things go, you walk home and worry about tomorrow. But today had other plans. I give it all to God, because things like this just don’t happen.”

In another interview, Diggs said, “I ran around. My QB gave me a great throw, God took care of the rest. You watched the play. A guy ran into another guy. I give all the glory to God, I give Him the praise on this great Sunday.” He added, “All I can say is, I give it to God because without Him nothing is possible and I wouldn’t be here. … God put me in a position and I just tried to take advantage of my opportunity.”

The Vikings will now play the Philadelphia Eagles in the NFC Championship at Lincoln Financial Field at 5:40 p.m. on Sunday. The winner will advance to Super Bowl LII at U.S. Bank Stadium.

Keenum’s backstory is unusual to say the least. The 6’1″ ultra-competitive player has been involved in the Fellowship of Christian Athletes his entire life. His father, Steve Keenum is the director of the Big Country Area FCA region in Abilene and was a football coach within the organization as Case Keenum was growing up. “There was something different about the men who were Christians,” Keenum said. “When I was 7, 8, 9 years old, I wanted to be in the NFL and be like them.” He continued: “That’s why I became a Christian — being around Christian athletes through FCA. I’m not playing for the name on the back of my jersey, I’m playing to glorify God. He’s given me talents, and I’m trying to maximize those talents however I can.”

He played football in high school and in college at the University of Houston. Then, during his senior season in college, he tore up his knee. He returned on a redshirt in 2011 to throw 48 touchdown passes and just five interceptions. He did this while clearing 5,600 yards for the second time. He thought he would get drafted, especially since the Cougars ended their season at 12-1 and beat Penn State in a bowl game. But he didn’t.

God Was in Control

Yet he knew that God was in control. “That was as tough a time as I’ve ever gone through,” Keenum said. “You just realize that football is fickle; it’s not going to be there all the time. Just getting my priorities straight and knowing the true reason I play the game, and that’s to give glory to God. That’s something I take pride in. It’s why I do what I do.”

The then-Texans coach Gary Kubiak signed Keenum, but he lost his first eight NFL starts. His 0-8 career start left him feeling frustrated. “It affected me,” he said. “It didn’t stop me. … It beat me down physically, mentally. I wasn’t used to losing, and I took a lot of that on myself. I think that’s why I play quarterback. You get the ball in your hands and you make decisions every play. And to not be successful like that was really hard, really frustrating. And it took some time to learn from that.” But he prayed constantly. At the end of every prayer, Keenum said the same thing: “I’m going to trust in what Your plan is for me.”

He was waived by the Texans, signed and waived by the Rams then re-signed by Houston off the Rams’ practice squad, reported ESPN. While the 2014 season brought wins against Baltimore and Jacksonville, he was traded back to the Rams for a seventh-round pick in 2015.

Signed by the Vikings

Minnesota signed Keenum early last year for a measly $2 million, one-year contract. They didn’t realize how important Keenum would become almost immediately. The Vikings started their season without quarterback Teddy Bridgewater, then they lost Sam Bradford in week two — both were out due to knee injuries. But the quarterback who had never been drafted stepped up to the challenge. He threw a 22-yard touchdown pass on Thanksgiving Day, he’s been strong against the blitz all year and strong outside the pocket, reported ESPN.

But his passion and motivation for the game is what catches his coach’s and teammates’ attention. “His self-motivation is off the charts,” said quarterbacks coach Kevin Stefanski. “He’s obsessed with the process.” Adam Thielen, wide receiver for the Vikings, agreed. “He’s not just showing up at 6 a.m. just to be here. He’s got a plan. He knows the defense before we play them, and he knows the game plan better than anyone I’ve ever been around. … Maybe even better than some of the coaches.”

Maybe so, but Keenum is taking his game day-by-day and seeks to honor God in all he does. “My faith is the number one thing that makes me, me. It is what my identity is in; it’s not in this game,” Keenum says. “So I know that, although I do put everything I have into this game, it’s not a life-or-death thing for me.

“I want to do the very best I can, all the time, and I want to honor God when I do that,” Keenum added. “And I think I do when I leave it all on the field.”