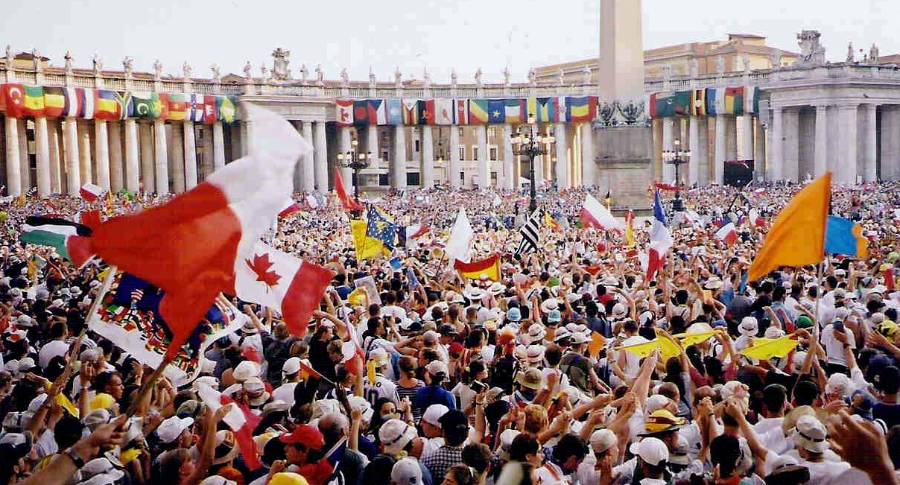 Young people flocked to Rome for the 15th World Youth Day in 2000, during which Pope John Paul II delivered an address with timeless wisdom for youth.

By Stefano Gennarini Published on October 6, 2018 •

Many today say, “We must listen to the youth.” No one ever says young people should listen. It’s as if young people are expected to recreate the world overnight by their innate knowledge. But the motives people have for listening to youth are not always pure.

Corporations listen to young people to make money. Millennials are the most coveted demographic. Corporations are willing to pay billions in ads to attract them. International bureaucrats at the United Nations want to accelerate social change in conservative societies by putting young people in authority.

The Catholic Church must not fall in the trap of merely “listening” to young people as a gimmick during the ongoing Synod on Youth at the Vatican. Young people are not stupid. The last thing young people need to hear is the Church sounding like a Nike commercial or a UN campaign.

Sadly, the document the Synod Fathers are currently drafting barely addresses essential themes like chastity, obedience to Church teaching, and sin. These are core issues that young people need to grapple with on their journey of faith.

And it is urgent to address them in the digital age. Young people are besieged like never before because of new technologies. Pretending they are not central will only condemn the outcome of the Synod to irrelevancy, or worse, fail to defend the Church’s youth from the threats of the devil.

Saint John Paul II left an incredible legacy still relevant to our times. He always avoided the insipid bureaucratic tone of so many Church documents. I pray the Synod Fathers will look over Saint John Paul’s many addresses to young people in the days ahead and flood the current document with his wisdom.

The Church is not interested in listening to young people to sell them a product or use them for political purposes. The Church has a message for them. It is the Gospel of Jesus Christ. And it is the only message that will ever change their life and fulfill them.

Perhaps no one in history was more effective at announcing the Gospel to young people than St. John Paul II. Bishops would do well to go over his many addresses to the World’s Youth as they try to piece together a document to help pastors and young people.

He was a magnet for young people. He looked for young people at World Youth Days, year after year. Come rain or come sunshine, he would be there to meet them on the field. And they ran like maniacs to catch a glimpse of him in the middle of huge crowds on muddy fields. They cried hysterically when they met him and heard him speak, even when several football fields away.

Later in life, when he was on a wheelchair, so weak he could hardly raise his hands to waive or utter a word, young people were drawn to him. When he was dying young people flocked to St. Peter’s Square. Many young people wanted to be with him. He loved them first. And they loved him back.

They were drawn to him because he was a witness of the resurrection of Jesus Christ. In a world gripped by a paralyzing fear of death, war, poverty, old age, climate change, he stood fearless. He urged others to not be afraid and “Open wide the doors to Christ!” His words were not empty promises of future dreams. He had crossed the threshold of hope and was inviting young people to join him.

Unafraid to be unpopular

There was no rhetoric or trickery in his speeches. He was authentic. Saint John Paul II’s words rang true, and they still ring true. He met Jesus Christ. He spoke to him every day. He was united to him. Jesus Christ fulfilled the deepest longing of his being.

He did not ask young people to commit more time or make a little more effort to be better Christians. He asked them to give all of themselves to Christ, their entire life and being. In return he promised true happiness and eternal life. He wanted all to experience the same fulfillment and peace that he found in unity with Jesus Christ.

A Call to Faithfulness

This is what he asked of young people on the 15th World Youth Day in 2000: To follow Jesus, he began, demands “that we take a stand for him, almost to the point at times of a new martyrdom: the martyrdom of those who, today as yesterday, are called to go against the tide in order to follow the divine Master, to follow “the Lamb wherever he goes” (Rev 14:4).” He continued:

Perhaps you will not have to shed your blood, but you will certainly be asked to be faithful to Christ! A faithfulness to be lived in the circumstances of everyday life: I am thinking of how difficult it is in today’s world for engaged couples to be faithful to purity before marriage. I think of how the mutual fidelity of young married couples is put to the test. I think of friendships and how easily the temptation to be disloyal creeps in.

I think also of how those who have chosen the path of special consecration have to struggle to persevere in their dedication to God and to their brothers and sisters. I think of those who want to live a life of solidarity and love in a world where the only things that seem to matter are the logic of profit and one’s personal or group interest.

Dear young people, in such a world is it hard to believe? Is it hard to believe in the Third Millennium? Yes! It is hard. There is no need to hide it. It is hard, but with the help of grace it can be done, as Jesus explained to Peter: “Neither flesh nor blood has revealed this to you, but my Father who is in heaven” (Mt 16:17).”

It is the witnesses of John Paul II and words like his that the youth need to see and hear today.

Is Christianity in America Toast?