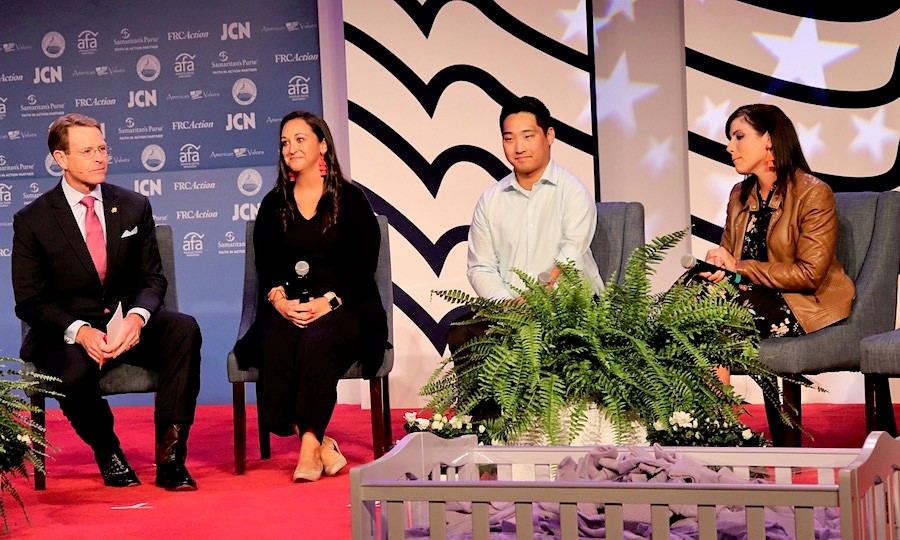 On October 11, 2019, Family Research Council Action president Tony Perkins moderates a panel of abortion survivors including (R-L) Claire Culwell, Josiah Presley, and Melissa Ohden. They spoke to an audience of more than 1,900 people at Values Voter Summit 2019 in Washington, D.C.

“Love is to speak the truth that people don’t want to hear,” said Tony Perkins, president of Family Research Council Action, while interviewing a panel of abortion survivors.

His statement came late on the first day of the 14th annual Values Voter Summit in Washington, D.C. A gathering of Christian conservative activists broadcast online and on C-SPAN, the conference welcomed President Donald Trump as the keynote address on its second day.

Notably, Melissa Ohden of the Abortion Survivors Network joined Josiah Presley and Claire Culwell on-stage. Each shared their stories of being born after unsuccessful abortion procedures.

“Our purpose is to educate the public that abortions fail and children can live,” said Ohden in an interview. “We give people a glimpse into what our humanity looks like. At the same time, our group ensures that survivors are connected. Most of them feel terribly alone.”

That discussion left hardly a dry eye among more than 1,900 attendees gathered. Event emcee Gil Mertz called it “a standout panel of not just this Values Voter Summit, but of all past summits we’ve done.”

Among the elected officials and authors who addressed the summit, a high-ranking figure in the Trump administration extolled the value of every life.

With a budget second only to Defense, the Department of Health and Human Services (HHS) keeps vulnerable lives paramount in its mission according to Secretary Azar.

“HHS is dedicated to serving all Americans from conception to natural death,” said Azar, quoting from the agency’s five-year strategic plan. “All of this work must be approached with an appreciation for the dignity of every human life and with respect for the conscience rights of every American.”

Yet a related effort in Congress has stalled. Several summit speakers referred to the Born Alive Abortion Survivors Protection Act.

Speaker of the House Nancy Pelosi (D-Cali.) will not currently allow a vote on this bill, which would mandate medical providers offer care to infants who survive abortions.

“This should not be a partisan issue,” said Ohden. “We are talking about the lives of people just like me who deserve timely medical treatment. We’ll continue to push for the Born Alive act to finally hit the House floor.”

While speakers agreed on pro-life policies, Values Voter Summit attracted some diversity of political viewpoints. Most were supportive of President Trump, though some expressed criticisms. Others identified with the Democratic Party, notably Jackson.

Following her speech, she rushed to return home and campaign for Louisiana Governor John Bel Edwards. He faces a tight race as several Republican candidates seek to unseat him. Jackson described Edwards as “a pro-life, pro-prayer-in-school, pro-Second Amendment Democrat.”

“He is pro-life in his approach to all issues,” said Jackson. “It is shocking to me that his race has become such a national issue among those who share pro-life views.” Prior to his appearance at the D.C. summit, President Trump held a rally to boost the Republican challenger.

Meanwhile, on social media the hashtag #VVS19 was flooded by voices criticizing President Trump. The head of Abortion Survivors Network said she understands some of the ongoing discussion (when civil).

Back in 2016, during heated primaries, Ohden had signed on to a letter of female pro-life leaders with the headline “Anyone But Trump.”

“This has been a process for me too,” said Ohden. “To look at him and say: who is he and what does he believe? Earlier this year, I was invited to the Oval Office to meet with the President. He made a believer out of me. I respect him and his administration so much for all that they’ve done for life.”

During the abortion survivors panel, Ohden noted her group had helped FRC compile material for an introduction video. It revealed how so-called birth day abortions have dominated the public discussion in several states this past year.

At the summit, FRC Action raised thousands of dollars for an advocacy strategy related to this bill. The group plans to send 90,000 blue-and-pink newborn baby hats to Pelosi’s office.

Pro-Life Democrat in the Spotlight

Each of the three women have championed pro-life legislative advances in their respective states.

“I am always encouraged when people who stand up for life and family values come together to advocate and be a voice for the unborn,” said Jackson in an interview following their session.

“Before I’m a Democrat, I’m a Christian first. I’ll stand with anyone who stands with the things of God and taking care of people.”

Last month, a group of pro-life Democrats protested their lack of representation among the party’s 2020 candidates.

The state legislator authored a Louisiana law that abortion facilities have challenged in court. It requires abortion providers adhere to the same licensing requirements as other medical personnel. Last week, the Supreme Court accepted the case.

With the high court’s decision likely in June 2020, it sets up abortion and the right to life as major campaign issues.

“My prayer is that the Supreme Court would choose to uphold women’s health,” said Jackson.

“Current policies have a more relaxed standard for abortion facilities than for regular clinics. We have a state interest in the health and safety of our constituents.”

Even among allies, navigating politics will be difficult in a contentious election year. But Ohden says that a bipartisan pro-life movement is worth fighting for.

“The only way this issue is going to get solved — and legislation is going to be pushed through — is if we cross the political aisle,” said Ohden. “It doesn’t mean we abandon our principles.” Jackson agrees, even as she hopes her friend Governor Edwards continues to have the opportunity to serve Louisiana as a “pro-life, pro-Christian Democrat.”

“Some say they can never support him because they hear the word ‘Democrat,’” said Jackson. “Then I would submit that you probably honor your party more than you honor the values that you fight for. Before I honor anything, I honor God.”

As a pro-life advocate, Ohden says she has often been on the receiving end of vitriol from the Left — and urges “both sides” to find common ground.

“We need to treat each other with respect and dignity and start having conversations,” she said.