Anyone remember when it was all about "my body, my choice"? 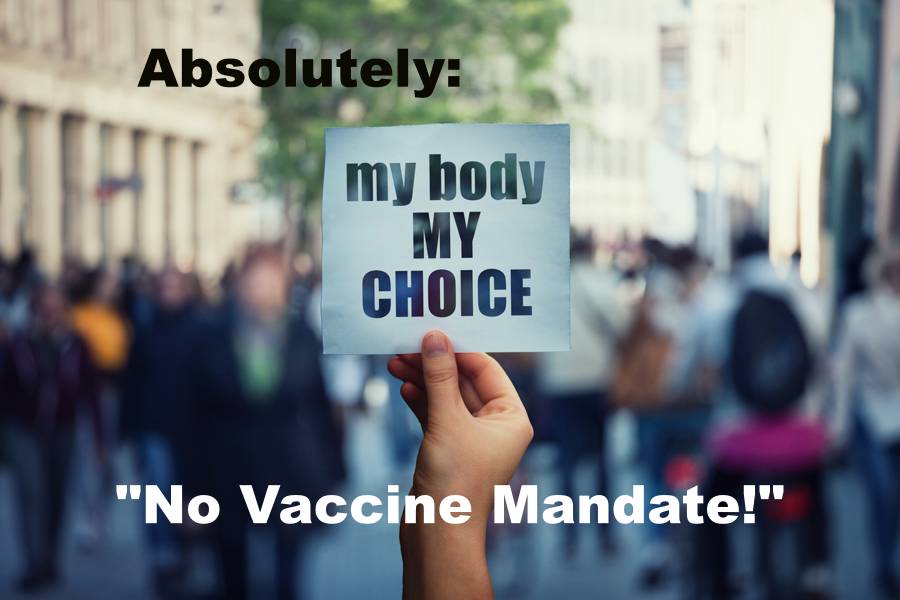 A friend and I were asking each other this morning how we can keep a sense of humor in these very serious days. Turns out sometimes it’s easy. Some abortion advocate tweeted this weekend,

“The man or woman who thinks they can tell another woman what she can do with her body is incredibly unpopular.”

I tweeted back, “Just out of curiosity, what’s your view on vaccine mandates?”

Just out of curiosity, what’s your view on vaccine mandates? https://t.co/s3rSoptMrg

She didn’t answer. She might not have even laughed. I thought it was hilarious, myself. I’m not taking credit for it, mind you. It’s her joke; she just didn’t realize it.

Democrats as the Anti-Choice Party

There’s something almost entertaining in the way some people can twist their own standards around that way. Other than that, though, I don’t think much of Democrats’ hypocrisy. Here’s this woman, yodeling back the party line, “You can’t tell a woman what to do with her body!” Meanwhile her party — you know she’s no Republican — wants to force everyone to get the COVID vaccine.

The Democrats have become the anti-choice party. Look at New York, both the city and the state, run by Democrats. As of today, you can’t even walk into a New York City restaurant without proving you’ve taken the big jab. New Orleans, Los Angeles, and San Francisco have made the same decision. Where you see politicians standing for choice, you also see (R) for Republican following their names. 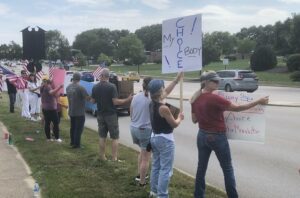 “Everybody I know Is P***** Off,” says Ronald Brownstein in The Atlantic. Why? Because not everybody else wants the vaccine. I’d say if that’s truly the case for everyone he knows, he needs to get out more. There’s a whole lot of us who are angry for the opposite reason — like this group protesting just a mile from my home on Saturday.

(Pardon the snapshot quality: My wife and I weren’t there to protest or to report, we were picking up food for a wedding anniversary picnic. Coming back from the park, we saw the crowd had more than doubled.)

So yes, a lot of people are angry. Brownstein himself is one of the reasons. So is Matthew Baum, a public-policy prof at Harvard, from whom Brownstein got the “p***** off” line:

Over time, this general sense may grow of “Why are we who are vaccinated enduring this in order to coddle this liberty fantasy of the unvaccinated?” And I think that is going to get stronger as the inconvenience grows, and as the wind goes out of the getting-back-to-normal sails, which is clearly happening. Everybody I know is p***** off.

Angry? Sure enough. Liberty fantasy? Condescending, anyone? I guess we can’t all be Harvard profs. We’d better just shut up and let him tell us what’s real and what’s fantasy. “Yes, master Baum. Whatever you say, Master Baum.” But what about the fantasy that says everyone has liberty to kill defenseless babies? Where does that come from?

It’s no “fantasy liberty” in action when we object to the government forcing a still-experimental medical treatment on us. It’s no “fantasy liberty” to use our own judgment with respect to our own risks. If not taking the vaccine might harm some innocent, defenseless victim, then I could see the point in these mandates. But there are no defenseless victims. Everyone who wants the shot can get it. If it works as they say it does, then they’re golden.

What Are They Afraid Of, Anyway?

And why do Baum and Brownstein even care? Seriously. Don’t progressives want to win these culture wars? Then why not let us conservatives commit collective COVID suicide? It’s always conservatives to blame — nasty Republicans, in Brownstein’s article — even if the least vaccinated portions of the population are among people of color. You tell me why he ignores that.

If the vaccine works, his side will survive and thrive. Ours? Poof, gone! Out of the way, nowhere to be seen. Like the Rapture, only better — for them, anyway, until they find out God doesn’t go away so easily. For now, you’d think progressives would be thrilled to let us all die our chosen deaths. But that would mean letting us choose. “My body, my choice” isn’t for us.

So where’s this horrible damage they’re all so worried about? Nury Martinez, president of the LA City Council, tweeted on August 11,

Today the Los Angeles City Council passed legislation to require proof of COVID-19 vaccinations for Angelenos to enter indoor public spaces. Your decision to remain unvaccinated doesn’t just affect you — it affects us all.

It affects us all? How? Maybe it’s the economic shutdowns the unvaccinated will force on the country. Maybe I’ll laugh even harder, if they try that one on us. Here’s an easy answer: Don’t shut things down. Let the country keep running. Let the unvaccinated take their own self-chosen risks. The vaccinated have an effective defense against them.

So why on earth would anyone even think of locking things down again? They have more than enough protection to keep on going, even as the country keeps on going. No defenseless person need be harmed, because no person need be defenseless. There simply are no innocent, defenseless COVID victims anymore; not if it’s true that the vaccines are effective and safe; not if there’s no reason to doubt the truth of such assurances.

Which Liberty is the Fantasy Liberty?

That’s what the left keeps telling us. If they’re right, the only COVID victims left must be those who’ve made their own free choice to take the risk. Is that a “fantasy liberty”? Why? Who made it a fantasy? And who made the original “my body, my choice” a real liberty? If Glenda decides not to get the vaccine, someone might get sick, maybe a little, maybe a lot. Someone might die. There’s some risk there, no doubt about it. But “no doubt about it” absolutely applies to abortion: If Glenda goes that route, someone is absolutely certain to die.

Which of these makes more sense, as choices go?

The Dems’ One Consistent Principle

The Democrats stand for choice, they say, but they only want it when it suits them. That’s the single most consistent principle in play here; that, and their drive to take care of us. Manage us. Control us. Turning historic liberties into “fantasy liberties.” Because they know so much better, right?

This is why my friend and I had that conversation about whether it’s possible in these days to keep a sense of humor about us. Sure, it’s hard. The next time I hear some abortion advocate saying, “My body, my choice,” though, I promise you, I’ll be on the ground laughing. And crying.