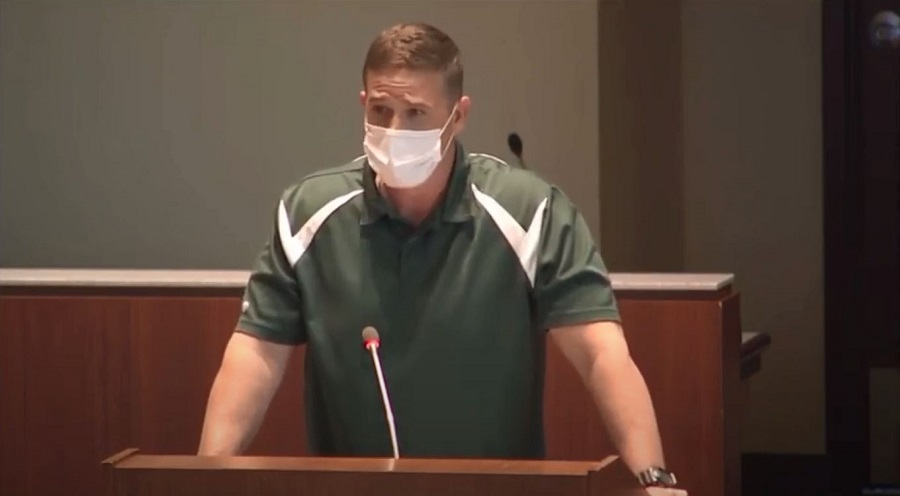 PE Teacher Tanner Cross spoke at a school board meeting Tuesday. Now he’s on leave for what he said.

Cross teaches physical education in a Loudoun County, VA, elementary school. On Tuesday, he told his school board that he would not affirm “that a biological boy can be a girl and vice versa,” because he serves “God first,” and to affirm transgenderism would be “sinning against our God,” Fox News first reported.

Cross doesn’t want to hurt those who identify as transgender. “My name is Tanner Cross and I am speaking out of love for those who suffer with gender dysphoria,” he told his school board. “60 Minutes this past Sunday interviewed over 30 young people who transitioned but they felt led astray because of lack of pushback or how easy it was to make physical changes to their bodies … they are now detransitioning.” He added:

It’s not my intention to hurt anyone, but there are certain truths that we must face when ready. We condemn school policies … because [they] would damage children, defile the holy image of God. I love all of my students but I will never lie to them regardless of the consequences. I’m a teacher but I serve God first and I will not affirm that a biological boy can be a girl and vice versa because it’s against my religion, it’s lying to a child, it’s abuse to a child, and it’s sinning against our God.

In his speech, Cross referenced Policy 8040. Policy 8040 requires staff at LCPS to use the preferred pronouns of students. According to Policy 8040, “LCPS staff shall allow gender-expansive or transgender students to use their chosen name and gender pronouns that reflect their gender identity without any substantiating evidence, regardless of the name and gender recorded in the student’s permanent educational record.”

School staff shall, at the request of a student or parent/legal guardian, when using a name or pronoun to address the student, use the name and pronoun that correspond to their gender identity. The use of gender-neutral pronouns are appropriate. Inadvertent slips in the use of names or pronouns may occur; however, staff or students who intentionally and persistently refuse to respect a student’s gender identity by using the wrong name and gender pronoun are in violation of this policy.

Fox News obtained an email sent Thursday from the principal of Leesburg Elementary via the group Parents Against Critical Theory. Principal Shawn Lacey stated in the email that “I’m contacting you to let you know that one of our physical education teachers, Tanner Cross, is on leave beginning this morning. In his absence, his duties will be covered by substitute staff already working in our building.”

The email did not indicate why Cross was put on leave. Loudoun County Public Schools (LCPS) told Fox News the email did originate from Lacey.

According to an LCPS spokesperson, Cross has been placed on administrative leave with pay.