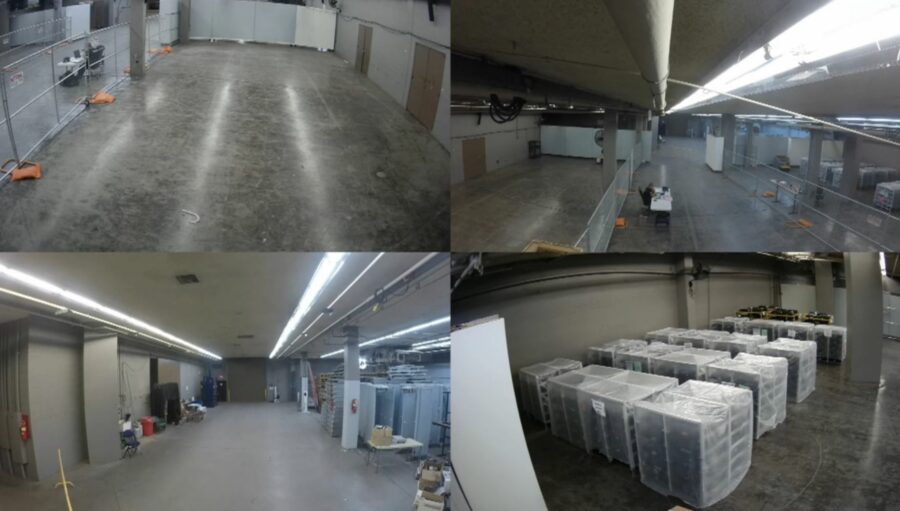 A screenshot of Camera 1, June 16, 2021, at the Arizona Audit of Maricopa County ballots.

Here’s some of the latest news out from the Arizona audit and Georgia investigations into the U.S. Vote Leak Theory.

The hand count of the nearly 2.1 million ballots in Maricopa County, Arizona is complete.

Audit Update: Hand count of ballots was completed yesterday with the exception of Braille ballots. The paper examination phase continues and we are examining over 100k ballots per day!

They’ve finished up by going through boxes that contain duplicated ballots. For example, when oversea voters email or fax a ballot it has to be placed onto a regular ballot by poll workers. Auditors want to make sure what the voter intended is what ended up on the ballot.

The focus of the audit now turns to the “paper examination phase.” In this high-tech effort, auditors are looking for folds where there should be folds. For example, are there absentee ballots that should have arrived folded in envelopes showing up as straight and flat as an Iowa country road? Witnesses in Georgia swear they’ve seen hundreds of such ballots.

They are looking to ensure none of the ballots were filled in by machine. (Again, as attested to under oath in Georgia.)

They’re also checking whether the alignment on the ballots are correct. (For example, in Michigan, lawyer Matthew DePerno claims GOP ballots were misaligned, forcing a high percentage into adjudication, where a poll worker could easily flip the ballot to Biden.)

Spokesmen for the Arizona audit are pushing back on a report that 200,000 ballots for Maricopa County are missing.

“There has been no such finding yet,” Ken Bennett, former Arizona Secretary of State, told The Epoch Times. Another spokesman, Randy Pullen said the report is “crazy.”

“We found a ballot shortage, anywhere from 5 to 10 percent of the votes,” Barnett had said. “It looks like a couple hundred thousand ballots are unaccounted for. The ballots are missing.”

(Bummer that at this point it appears to be untrue. I was all set to joke how the Democrats will say the ballots were stolen by the same MAGA people who assaulted Jussie Smollett.)

Arizona Attorney General Mark Brnovich says his office is “not amused” Biden’s Attorney General Merrick Garland is making moves to meddle in Arizona’s audit. In a letter to Garland, Brnovoch said he’s not going to tolerate any nonsense out of Washington.

Also not amusing? Media and democratic assaults on the integrity of the Arizona audit. Bernard Kerik has a good article at Newsmax explaining the nuts and bolts. He’s right. If all states did what Arizona is doing after an election, nobody’d have any grounds to complain.

Here’s a fun test. After you’re done reading the next story, read Kerik’s and ask yourself “Who’s really protecting the integrity of the vote?”

Meanwhile, here’s a link to the live stream of the Arizona Audit.

Georgia: No Chain of Custody for 25% of Absentee Ballots Left in Fulton County Drop Boxes. Official Admits a “Few” Documents are Missing

You know those absentee ballot drop boxes set up in 2020 using COVID as an excuse, making ballot harvesting easy as pie? Fulton County had 37 of those boxes. According to Georgia code, each time there was a pick-up from one of those boxes — or any transfer thereafter — those transfers had to be documented to maintain chain-of-custody.

According to an investigation by The Georgia Star News, there were 1,565 separate and unique transfers of absentee ballots. Yet there are only 1,180 absentee ballot transfer forms. 385 fewer than required.

Fulton County election official Mariska Bodison admitted “a few forms” are missing. Nothing to see. Fulton County thinks 1 in 4 is “a few.” Lacking chain of custody 25% of the time is “a few.”

The Star News analysis shows 18,901 absentee ballots in Fulton have a broken chain of custody. According to the drop box election procedures set up arranged by Stacy Abrams herself, those ballots were not supposed to be counted. They were to be  provisional ballots, until the forms turned up. Considering around 90% of the drop box ballots in Fulton went to Biden, that means Biden got about 17,000 more votes than he should have.  By Abrams own rules. His margin of victory was only 11,500 votes.

Bodison’s confession is significant, says the Star News. “This is the first time that any election official at either the state or county level from a key battleground state has made an admission of significant error in election procedures for the November 3, 2020 election.”

And the original Star News article on just how jumbled the chain of custody on absentee ballots was here.

Also, John Solomon is out Thursday morning with a new article indicated 100 batches of absentee ballots, or roughly 10,000 ballots appear to be missing. Even more stunning:

Georgia: Sec of State Investigating This Ballot Chain of Custody Lapse … Eight Months After His Job Needed Him To

Fulton County election officials ignoring election rules is nothing new. Their staggering disregard for election integrity, their flaunting of it, will go down in history.

The official we need to focus on today is Georgia’s nominally Republican Secretary of State Brad Raffensperger. The guy who illegally circumvented the Georgia legislature to make a deal with Stacey Abrahms and Steele Dossier bagman Marc Elias to switch up election rules that left the state wide open for fraud. The guy who later lied about a call with then-President Trump.

He’s now launching an investigation into those missing absentee ballot transfer forms. Now. In June. Eight months after the election. As if he didn’t know this was an issue in November.

Mollie Hemingway reminds us that the chain of custody issue was “one of five substantive reasons why Republican election commissioners in Fulton couldn’t and wouldn’t vote to certify the Election in November.”

Inability to demonstrate custody of the ballots as secure was one of five substantive reasons why Republican election commissioners in Fulton couldn’t and wouldn’t vote to certify the Election in November. https://t.co/XzqrrQAs8V

It was Raffensperger’s responsibility to ensure chain of custody of ballots was maintained. And when Republican election officials in Fulton said “Atlanta, we have a problem,” he should have investigated then. And not go quickly certifying the presidential election like he was signing a receipt for dinner at Denny’s.

Finally, you want to see a staggering display of journalistic malpractice? Check out CNN’s article about Raffensperger’s investigation. It completely ignores the details reported by Star News. No mention of one-in-four forms being absent. No mention of loss of “chain of custody.” They only quote Raffensberger’s office saying Fulton County allegedly violating state rules “requiring absentee ballot drop transfer forms to be filled out.” You know. Just a paperwork thing.

Al Perrotta is the Managing Editor of The Stream and co-author, with John Zmirak, of The Politically Incorrect Guide to Immigration. You can follow him at @StreamingAl on Parler and @StreamingAl on Gab and MeWe. He’s also the barista for The Stream‘s daily newsletter The Morning Brew