Looking for a good flick to finish up your Memorial Day Weekend? 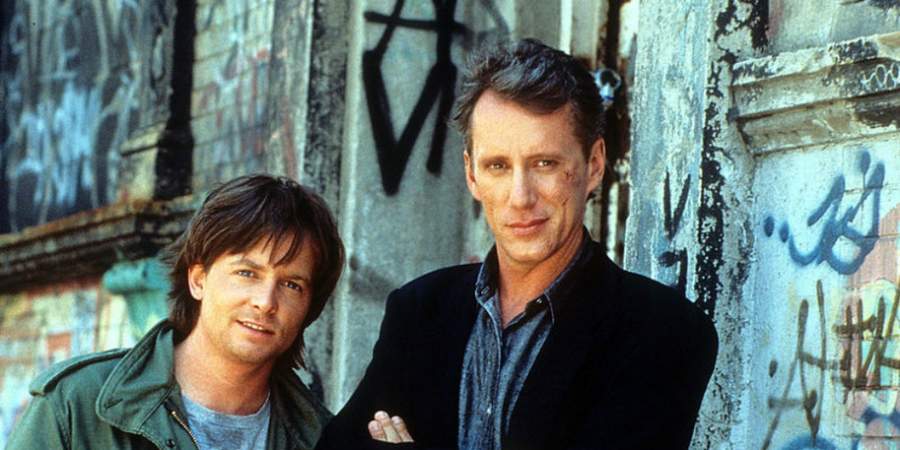 Here’s an idea for a fresh Hollywood remake: The Hard Way, the 1991 action film that stars James Woods and Michael J. Fox. The overlooked action comedy/drama offers a set-up that if done in 2021 could show some genuine bravery and self-awareness in La La Land.

Best of all, Woods, a hilarious and brilliant conservative firebrand on Twitter, could reprise the role. He still has the chops.

In The Hard Way Woods plays John Moss, an abrasive New York City cop who is trying to apprehend a serial killer called “The Party Crasher” (Stephen Lang). Fox is Nick Lang, a spoiled Hollywood movie star. Lang, a former child actor, is tired of playing dumb roles and not being taken seriously. He wants to do something real: a flesh and blood character who lives, breathes, and “throws up.”

So Lang takes a role playing a cop. To research the part, he goes to New York to tag along with Moss.

The Hard Way, which was recently reissued on a special blu-ray, not only holds up, it might even be more relevant in 2021. Fox’s Lang, super rich, surrounded by beautiful women, and unable to operate the remote on a TV, is the picture of false Hollywood godhood. Moss, on the other hand, is all rough language and hard edges. Moss is exactly what James Woods is in real life, what director John Badham calls “a profane, vituperative, highly energetic guy.”

When he first learns that the famous Nick Lang is going to be joining him on the beat, Moss seems less than enthusiastic: “I have no time to babysit a Hollywood rump wrangler.” When Lang appears Moss, who wants to go get a drink, tries to leave him behind. He tells the actor to do “what they do in Hollywood: rum drinks, fern bars, and gerbil racing.” Anyone who has followed Woods’s Twitter account knows this dialogue is not far from the real Woods, who is uncompromising. It’s not surprising when director Badham notes that many of the scenes in The Hard Way were improvised.

From Icons to Snowflakes

What makes The Hard Way so tonic even decades later? It does what Hollywood proves so reluctant to do: makes fun of celebrity. Actors were once patriotic (Jimmy Stewart), elegant (Elizabeth Taylor) and often had a playful, winking air that conveyed they knew not to take themselves too seriously (Sean Connery). They entertained us and we loved them and made them rich.

Now, every time an actor takes a role requiring him to portray a different nationality we hear squeals about “appropriation.” The female leads are all Mary Sues who excel at everything (like Rey in the Star Wars reboots). The awards ceremonies turned into political rallies, and (surprise!) cratered in the ratings. We don’t want to hear it.

In the commentary of the newly released edition of The Hard Way, producer Rob Cohen tells a a revealing story. The Michael J. Fox role in the film was first offered to Kevin Klein. Cohen says that actor “has a great talent for examining his navel.” The actor was afraid he would be making fun of his fellow actors and turned the part down.

What a missed opportunity. For Klein. Because Fox absolutely shines here. We laugh at his pettiness and entailment and obliviousness to real life, but we also grow to like him. With his fake toy gun and his aping of Moss’s mannerisms, he seems to know that there is something lacking in his soul.

They Never Get “No” for an Answer

As Cohen puts it, Fox zeroes in on the problem with too many celebrities: “They are at the tip of the pyramid, and everybody in the entire business gets up every day wondering how to write and produce a film that will attract one of these guys. They never hear the word, ‘No.’”

Fox doesn’t just want to get the part right. He wants to be a man, with the scars and passion and danger that goes with it. These days that is something Hollywood tends to discourage.

For his part, Moss also softens towards Lang, who proves willing to put himself in danger and begins to change. When Lang tells Moss that actors hate bad reviews more than anything else, Moss goes on TV to call The Party Crasher, the serial killer he’s chasing, “a pervert.” The Party Crasher “doesn’t even have the equipment to be a man,” sneers Moss. Lang is giving smart advice. The two begin to become fiends, or at least kind of respect each other.

If Hollywood truly were the brave, forward-thinking and challenging factory of ideas it claims to be, a genuinely daring studio might consider remaking The Hard Way. Woods, a patriot, would make sure to depict cops with respect, while at the same time encourage Hollywood to not take itself so seriously. They might even remember the regular Americans who buy the movie tickets.