The true story of Planned Parenthood whistleblower Abby Johnson opens in theaters this March. One young couple who prayed outside her abortion clinic played a key role in Johnson's decision to quit. 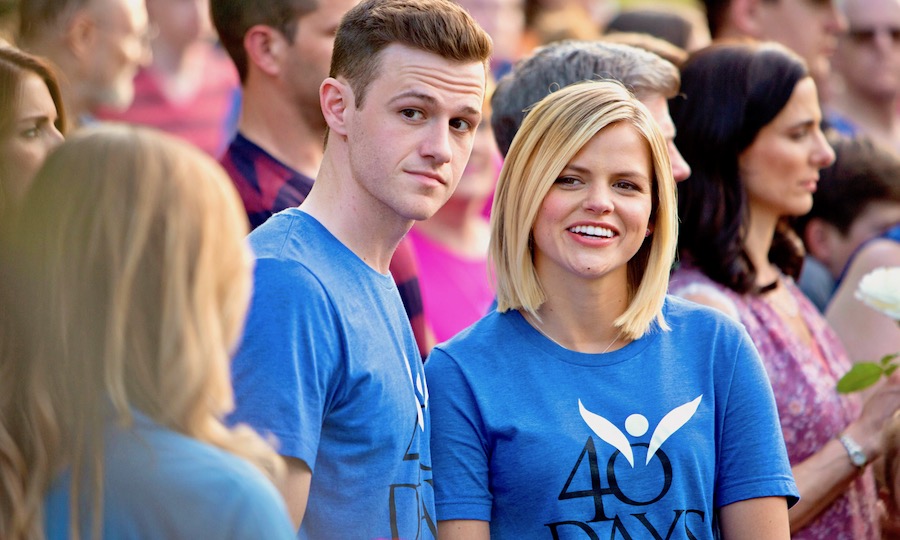 In a climactic scene from Unplanned, Shawn Carney (Jared Lotz) and his wife Marilisa (Emma Elle Roberts) pray at a vigil outside an abortion center in Bryan, Texas. Dramatizing the real-life story of former Planned Parenthood director Abby Johnson, the film opens in theaters nationwide on March 29.

On Friday, Believe Entertainment released a half-hour preview of the dramatic feature film Unplanned and announced its theatrical release for March 29. Based on real-life events, the $6 million independent film recounts the conversion of former Planned Parenthood clinic director Abby Johnson to abortion industry whistleblower and now pro-life leader. A two-minute trailer for the film is expected online soon.

In Washington, D.C. on Friday, Abby Johnson will be a keynote speaker at the 46th annual March for Life. She will speak alongside elected officials Senator Steve Daines (R-MT), Rep. Dan Lipinski (D-IL), Rep. Chris Smith (R-NJ), and State Rep. Katrina Jackson (D-LA). Last year, President Donald Trump became the first president to address the March for Life live via simulcast. On Friday, a new pre-recorded video message from the President will be played at the March for Life.

Tens of thousands are expected to participate at the outdoor rally on the National Mall. On Thursday, a few thousand youth and pro-life leaders gathered for a day-long conference in advance of the march. Unplanned had a presence throughout, with preview screenings, Q&A with the directors, and promotional material provided to attendees.

Shining A Spotlight On Pro-Life Prayer

Back in 2009 when the film’s events unfolded, Carney and his wife Marilisa had prayed for years outside the abortion center in Bryan, Texas where Johnson worked. The young couple played a key role in Johnson’s change of heart, as chronicled in her bestselling memoir Unplanned.

“Abby has said many times, ‘If there weren’t people out there praying for me, I wouldn’t be here,’” says Carney in a phone interview. “She has helped save thousands of babies, if not tens of thousands, through her testimony. And now she’s helped hundreds of workers leave the abortion industry.” He refers to And Then There Were None, her nonprofit group which assists those who desire to leave their positions working in clinics that perform abortions.

Carney notes that writer-directors Chuck Konzelman and Cary Solomon approached him four years ago as they began to craft the script. “When they interviewed me and Marilisa, I could tell their heart was in it,” he says. “They’re go-getters. They asked me specifics as they shaped aspects of the story, to convert Abby’s beautiful book into a movie.”

“The film is going to be a shot in the arm for the entire pro-life movement, but especially 40 Days for Life.”

The Carneys have not yet met in-person the young actors portraying them on-screen. “We had our seventh child while they were shooting the film this past summer,” notes Carney, who lives in Bryan, Texas. “It’s one reason we didn’t go visit the set.” Unplanned was filmed north of Oklahoma City, over 31 days last summer. Producers cast Emma Elle Roberts as Marilisa Carney. Roberts is known for her roles in I’m Not Ashamed, a biopic on the 1999 Columbine school shooting, and The Hunger Games: Mockingjay. She spoke to media on-set.

“I’ve been on my own since I was 16,” says Roberts. “My parents had asked me to leave home, and I went into a bit of a spiral. Because I have an edgier look, usually I get stuck playing the druggie. When I did the role of Celine, I saw who I could’ve become.”

In I’m Not Ashamed, Celine invites her friend Rachel Scott to teen parties fueled by alcohol and illicit activity. That role shares little in common with the devout woman of prayer Roberts plays in Unplanned.

“One of the most beautiful things about Marilisa is her advocacy,” notes Roberts, whose character seeks to dissuade couples before they enter the abortion center. “It was always from a point of love and mercy — no condemnation. That’s how I want people to feel when they tell me their story. They can know that I’m not judging them.”

“As actors, they chose this profession and have done a lot of major films. It’s a risk to be in the anti-abortion movie exposing Planned Parenthood.” – Shawn Carney

Producers expect media criticism, though mainstream outlets have thus far largely ignored Unplanned. “No movie has ever shown pro-life activism in a positive light,” says Shawn Carney. “As actors, all of them took a huge career risk. They chose this profession and have done a lot of major films.”

“It’s a risk to be in the anti-abortion movie exposing Planned Parenthood.”

Seated next to Roberts, co-star Jared Lotz portrays lanky, gregarious Shawn Carney. Making his big-screen debut in Unplanned, Lotz recalls that directors warned him the film will be controversial. “The audition was in Los Angeles,” says the young actor. “When we first met, Chuck and Cary scared the crap out of me. Cary said, ‘You’re going to get backlash.’ Chuck mentioned a Variety review that compared their God’s Not Dead film to ‘Nazi propaganda.’ They came at me with everything they had.”

Roberts, no stranger to auditions, also noted the intense casting process. “They were not going to let us get away easy,” said Roberts. “But this is my fourth pro-life film in the last two years. When God wants you somewhere, he gets you there. You can’t avoid it or hide from it.”

The two actors are aware faith-based films have a poor reputation in Hollywood, as Lotz recalls past auditions. “Honestly, most of the time my response has been: I don’t know if I want to be part of that project,” he says. “After this audition, I felt God prepared me with faith and courage to step out. But I didn’t hear back for months, until it all fell into place at the last minute.”

His co-star confirms the story. “Two days before I left to film, I asked a producer: ‘Do you guys know who’s playing my husband yet?’” recounts Roberts. “They were like, ‘No, we’ll let you know.’”

The two friends soberly discuss the movie’s likely backlash. “It is scary to think, I am stepping into this and there will be controversy,” says Lotz. “My image might not make it out in the way I wanted. Still, if I’m following after what God has for me, it’s one hundred times better than anything I can do for myself.” “Hearts And Minds Are Changing”

Emma Elle Roberts looks forward to meeting her real-life counterpart face-to-face as press and premiere events ramp up for Unplanned.

“Marilisa [was] very pregnant with their seventh while filming [was] going on,” says Roberts. “Fun party trick: Jared can actually name all their kids, which I think is hilarious.” Without missing a beat, Lotz ticks off the names of the six Carney children, ending with “and one on the way.”

Today a friend to Lotz from their many phone calls, Shawn Carney had not heard how deeply the actor embraced the role. “That’s hysterical,” he says while laughing. “Now it makes sense why Jared contacted me after learning our little girl was born. He texted, What’s the new baby’s name?”

Being portrayed in a major feature film excites Carney because, he says, it will further their mission at 40 Days for Life. “The reason I believe abortion is ending is because I see what’s happening at the local level,” he says. “Hearts and minds are changing. It’s not like there have been 200 or 300 abortions in our country. There have been 60 million. That’s a lot of families, of women, of men, of aunts, uncles, and grandparents.”

The emerging star shares the convictions of the prayer leader he portrays. Lotz and producers anticipate Unplanned will advance the cultural conversation around abortion-related issues.

“A lot of people don’t want to talk about it,” says Lotz. “Hopefully, with a story as great as this, we can open up a dialogue. Even if they’re coming to rag on the movie, we can bring these events to life accurately and hopefully move them to a place of being open-minded.”

Learn more about the upcoming movie at Unplanned.com. Explore The Stream’s full coverage of life and human dignity issues and sign up for our weekly e-newsletter.