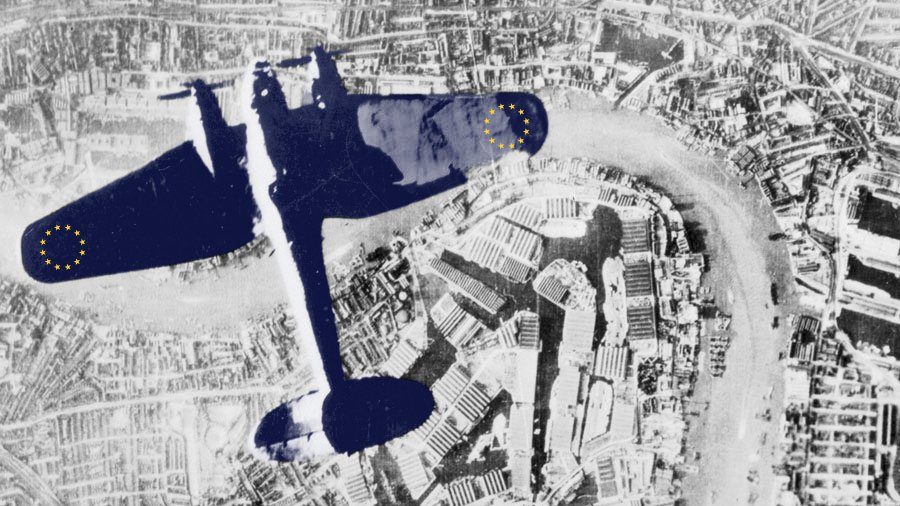 Though I’m half-Irish, I’m 100% Anglophile. That comes not just from growing up on BBC dramas rebroadcast on PBS. Nor even from reading the complete works of Evelyn Waugh in high school, of C.S. Lewis in college, or of Tolkien over a lifetime. Anyone who loves what’s unique and good in America is in fact showing gratitude for the best of the British tradition, minus most of the worst. The American Revolution amounted to a fight for the basic truths about human nature encoded in that tradition, against corrupt institutions and power-hungry politicians who threatened it. For in-depth explanations of our debt to Britain, see Daniel Hannan’s Inventing Freedom and Russell Kirk’s Roots of American Order. Or go visit Canada. Then visit Mexico.

We owe the United Kingdom the same filial piety we do to our grandparents, though they live far away and wouldn’t welcome our interference. Allow them their autonomy, respect their choices, but you still wouldn’t want to see them march off a cliff. Or join up with Scientology. Or decide in their 70s to surgically alter their “genders.”

That’s what almost happened to Britain this week. The nation narrowly avoided lopping off its vital members and becoming a Frankenstein monster. It’s hard to convey to Americans quite how insane the British left has gone. Except, of course, to those who live in enclaves like Portland, San Francisco, New York City, or those who work in universities. The anti-Trump “resistance” has not quite dared in most places to plumb the depths of the faction that dominates the British Labour Party, and most of that nation’s media. Not quite. (Give it five years or so.)

Imagine if the Democratic nomination went to Kathy Griffin. If Democrats stopped pretending that they even wanted peaceful treaties between Israelis and Arabs, and instead signed on with Hamas. If American leftists weren’t busy denying Muslim immigrants’ attraction to jihad and sharia, but instead defended those evils with shameless Marxist slogans. Imagine a U.S. leftist who didn’t just pardon Communist terrorists or pal around with them, as Barack Obama did. Imagine the Democrats nominated someone who laid wreaths at the graves of bin Laden and al Baghdadi.

That’s how bad the leaders of the British Labour Party are. Jeremy Corbyn combines nostalgia for socialist seizure of industry with a masochistic self-hatred for Western civilization. And a fondness for Jew-hating terrorists.

Boris Johnson is more like a British … Lindsey Graham. And Britain’s Donald Trump, Nigel Farage, isn’t even in Parliament.

Imagine if the “freshman squad” of Democrats like Alexandria Ocasio Cortez, Ilhan Omar, and Rashida Tlaib didn’t serve as the party’s far-left vanguard, but its vital center.

In Britain, a Gorbachev Beat an Andropov

Now you see who just lost the election in Britain. The most rabid advocates of abortion, euthanasia, mass Muslim immigration and economic sclerosis.

Who won? Boris Johnson, a politician who in American terms we’d see as a Bill Clinton Democrat, circa 1996. Better than any Marxist to be certain. But hardly a British Trump. David Sergeant wrote in the Australian editor of The Spectator:

Among the morally bankrupt commentariat, the antics of ‘Bonking Boris’ are a source of some amusement. But are Boris’s four affairs really so funny? The hurt done to those that loved him. The two unborn children aborted. How could we claim to be the Party of family whilst led by someone who believes men ‘should not be confined to one woman’?

Nothing illustrates Johnson’s duplicity better than the unpublished article, authored just two days before announcing his decision to campaign for Brexit, in which he argues passionately in favour of remaining in the EU.

Reiterating his credentials as the ‘most pro-immigration politician in Britain’, Boris once joked that his only allies were the Green Party. Describing immigration as ‘a wonderful thing’, he pushed amnesty for illegal migrants, whilst chastising those ‘foolish’ enough to oppose Turkey’s entry to the EU.

Following Donald Trump’s comments about ‘no-go areas’ in parts of London, Johnson responded as Mayor of London, with vitriolic dismissal, insisting that the future President of our closest ally was ‘clearly out of his mind’, guilty of displaying ‘stupefying ignorance’ and was ‘unfit to hold the office of the President of the United States’.

One of the earliest crusaders for same-sex marriage, Boris maintained that ‘institutions must move with the times’. Encouraging British embassies to fly the LGTB flag was among his first pronouncements as Foreign Secretary.

He did nothing to seriously address the global persecution of Christians. Indeed, his only words of ecumenical wisdom seem to be that: ‘Most religions… require a belief in all sorts of more or less peculiar things’.

The truth is simple. Boris Johnson isn’t a conservative. He isn’t a man of the people or the champion of grassroots. He’s an internationalist, establishment elite who will say or do anything for personal advantage. Sure, for now that might mean members like what we hear, but let there be no doubt – once elected – Johnson would turn on us in an instant.

Kyle Smith, of National Review, goes beyond the social issues to point out that Johnson promises to be a free-spending wastrel, dismantling any trace of fiscal prudence: “Thatcherism is dead.”

Yes, Boris Johnson is vastly better than Jeremy Corbyn, as Bill Clinton made a far better president than Sister Souljah would have. Remember her? Clinton helped stake out the electoral center by denouncing her anti-white, pro-crime rap lyrics. Just as Johnson’s center-left sanity prevailed over Corbyn’s decadent Marxism. But keep things in perspective. Johnson isn’t a British Trump. Reserve that honor for Nigel Farage, who led the fight for Brexit and kept some Tories honest. Johnson is more like a British … Lindsey Graham. And Britain’s Donald Trump, Nigel Farage, isn’t even in Parliament.

What’s really satisfying about the U.K. elections is different. Even if Johnson is the absolute opportunist Sergeant portrays him as, it’s telling what proved opportune. Most establishment politicians in virtually every party thought it opportune to reject the will of the people. To ignore, obstruct, and otherwise flout the clear vote of Britons to leave the European Union. To treat their decisive 2016 vote as the EU treated previous national referenda that didn’t go its way. That is, to punish the voters for voting “wrong” until they came around and voted correctly.

That’s precisely what Democrats in Congress, U.S. elites, and establishment Republicans busied themselves with doing since we voted “wrong” and elected Donald Trump. As I wrote back in September:

What’s happening here isn’t politics. It’s vicious, old-fashioned dog training of the cruelest kind. Americans didn’t vote right, and now they will be punished. They refused to accept the regime change imposed on them. So now the Democrats will destroy the country’s government, so as to save it. They will obstruct every initiative, refuse any compromise, gin up every remotely plausible charge that can last for a few news cycles. (Then get stuffed down the Memory Hole with Jussie Smollett and Michael Avenatti.)

They want to cause American voters pain, and make them associate that pain with having Trump, or anyone like him, in office. They don’t hope to convince us. That implies too much respect. These people want to condition us, like lab rats, to link conservatives and populists with stagnation and chaos. To flinch like mistreated pets, at the very sight of a newspaper, lest it smack us, HARD, on the nose. If we keep it up, they’re willing to beat us, lock us out, starve us.

What our elites won’t endure is being ruled by us, even when we outvote them. That indignity they will fight with every last milligram of malice in their cankered pagan souls.

That same attitude is what led British elites to think that they could stuff an unreconstructed Marxist and friend to terrorists down voters’ throats. Let’s hope that their American counterparts are just as disappointed come November 2020.

Socialism Is a False Religion. That’s Why It Kills the True One. Every Time.

You Don’t Know Anything. Just Admit It