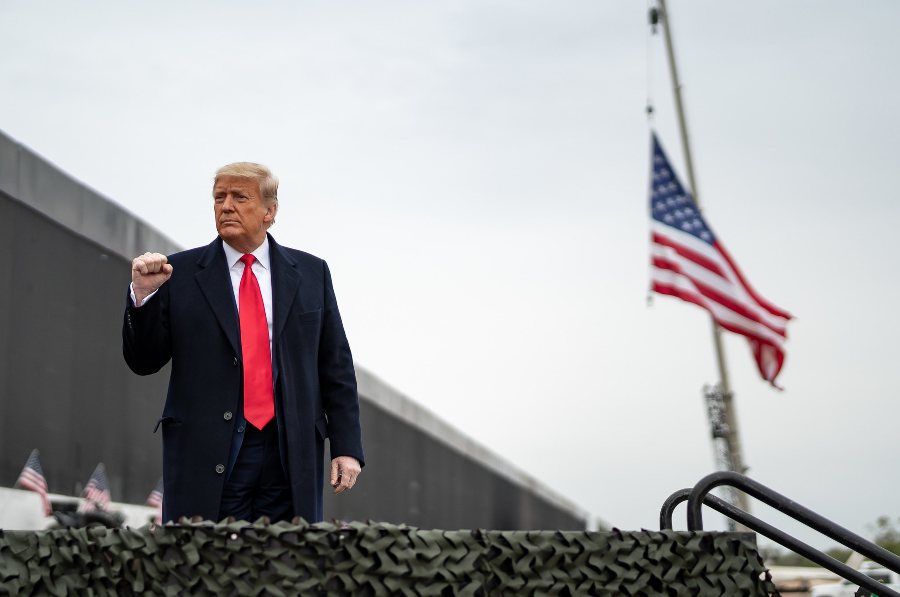 President Donald J. Trump concludes his remarks at the 450th mile of the new border wall Tuesday, Jan. 12, 2021, near the Texas Mexico border.

Let’s take a look at a few.

Yesterday, stories were circulating that Joe Biden was going to resume construction on the border wall, what with countless illegal immigrants now pouring through the holes. In fact, last week, DHS Secretary Alejandro Mayorkas said some areas may still be worked on to fill “gaps” in the Wall.

No way, the White House now says, perish the thought. “We don’t believe the wall is the answer, press secretary Jen Psaki said Wednesday. “We’ve never believed the wall is an answer to addressing the challenges, the immigration challenges at the border.”

Well, that’s not quite true. Democrats wanted the wall. Joe Biden himself said in 2006 that 700 miles of fence was needed to stop “tons” of drugs from pouring into the country. They liked the wall … up to the point Donald Trump came down the Trump Tower escalator.

Joe Biden announced Tuesday that the deadline for all states to make all adults in the U.S. eligible for the vaccine has been moved up to April 19. So in theory any adult who wants a vaccine can have one in April, 2021.

Which Donald Trump said in September would be the case … to much mockery by the Washington Post. Their headline at the time, “Trump says, without evidence, every American will get a coronavirus vaccine by April.”

Former president Donald Trump lost $1.1 billion while in the White House, according to an analysis by Forbes magazine. Add to it an estimated $1.6 billion in potential earnings, Trump’s four years as leader of the free world cost him a $2.7 billion turnaround. Which Trump said would be the case.

Reuters said in October 2019 Trump’s claim was “unsupported by evidence.” Now Forbes has the evidence.

But back to Trump’s shrinking fortune.

In 2019, Trump estimated the White House gig would cost him between $2 and $5 billion. However, he said he was willing to take the hit if it meant making a difference in the lives of Americans. “If I had to do it again,” he told reporters, “I would do it in an instant, because who cares, if you can afford it, what difference does it make?”

Not that Trump has to hire on down at the Palm Beach Grill to pay the bills. The $1.1 billion lost represents about a third of his wealth, says Forbes. Plus, he’s reportedly set to launch his own social media platform.

And there’s still my dream of a Celebrity Apprentice reboot featuring some of the characters who came to fame during the Trump Presidency. Stormy Daniels, Anthony “the Mooch” Scaramucci, Sean “Dancing With the Stars” Spicer … and, of course, Omarosa. Just to name a few. How could NBC resist?

Caitlyn Jenner is seriously considering a run for Governor of California in the upcoming recall election. As you know, Jenner is — horror of horrors — a Republican. In fact, according to the Daily Caller, Jenner’s got some former Trump advisers assisting the effort.

Before you go dismissing the possibility of a transgender Republican winning in California, consider the wisdom of comedian Dennis Miller. When Arnold Schwarzenegger announced he was running in California’s last recall election, everyone laughed.

Except Dennis Miller. “Arnold’s wanted to be two things in his life, and he became the best in the world at both of them,” I recall him saying, referencing Schwarzenegger becoming Mr. Universe and a Hollywood action star. “If he wants to be governor, don’t bet against him.”

Well, for similar reasons, you can’t laugh now. Jenner won the Olympic decathlon. It takes fierce will and determination to became the “World’s Greatest Athlete.” After which, Jenner became a successful entrepreneur and media figure. What’s more, Jenner might have seemed the affable, if clueless father and step-father on Keeping Up With the Kardashians, but make no mistake. Papa Jenner helped turn those three rather uninteresting step-daughters and Hollywood wife into international sensations and conglomerates.

Anyone capable of that can run a state … at least better than the Democrats who’ve been running the state into the ground.

Besides, it’ll be fun. It’ll be a hoot watching all those pushing the Equality Act and transgender activism suddenly halt and run the other direction over the prospect of Republican Gov. Caitlyn Jenner.