Who's actually out of touch? 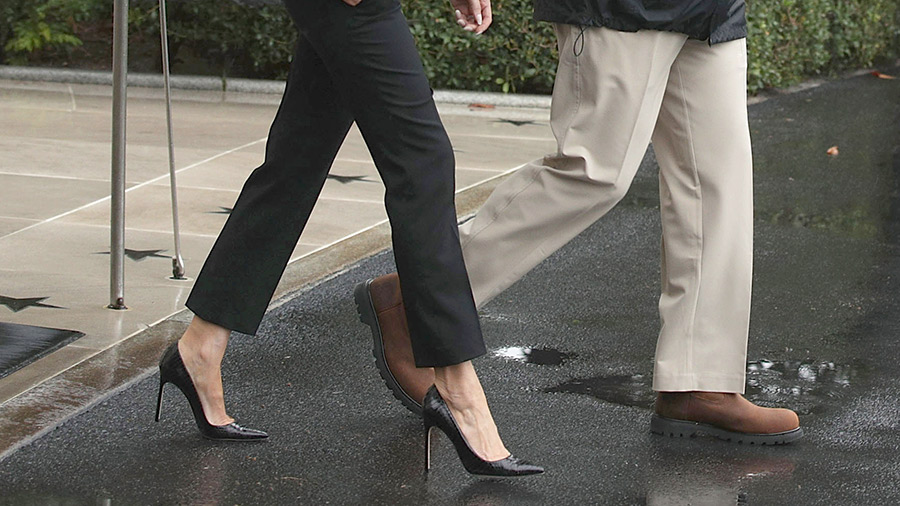 U.S. President Donald Trump walks with first lady Melania Trump prior to their Marine One departure from the White House August 29, 2017 in Washington, DC.

In the midst of a natural disaster, you’d think people would have more important topics to discuss than First Lady Melania Trump’s shoes.

As I write this, the First Lady is trending on Twitter. Not because she accompanied her husband to Texas to meet with state and local officials. Not because she participated in talks about one of the worst natural disasters in American history. But because as she boarded the plane to Corpus Christi — while she was still in D.C. — she wore stilettos, as the former supermodel tends to do.

As soon as photos of their departure landed on the internet, people freaked out.

Someone might want to tell Melania that her heels will have to be a little higher for this flood. https://t.co/KrZ00qbw94

I wouldn't normally comment on Melania's shoes but I'm not sure if this is what you wear to go meet ppl who've lost all of their belongings https://t.co/TP3YYgPIwj

Vogue claimed her shoe choice proved the White House fails to “understand optics.” Hollywood Reporter declared that the First Lady wore her heels “to tour Houston flood zone, no joke.” Never mind the fact that Melania traded the stilettos for sneakers by the time she landed in Texas. (At least the Reporter manages to squeeze that in at the end of its article, despite the misleading headline.)

People were so concerned with Melania’s footwear that word of the controversy reached the White House team mid-flight. This prompted a spokesperson for the First Lady to assure the anxious Twitter-verse that she had indeed brought different shoes. Waiting a few hours for the plane to land before passing mass judgment was too much to ask, it would seem.

After all, who wants to miss a good opportunity to bash the Trumps? Even while Tropical Storm Harvey rages on? Even while rescue workers plead for donations to help feed, clothe and house thousands of displaced Texans? Right?

It used to be a feminist girl code that it’s sexist to bash a woman for her looks and her outfits. Especially successful women who dare venture into the world of politics.

Why focus so much on her hair? Her dress? Her shoes? The monologue would go. Focus on her ideas, her policies, her actions.

Let’s be real. Not even the uber-leftist-feminism-is-everything Feminists keep that code when it comes to women on the Right. Melania Trump is forever cursed for being the wife of #TheResistance’s arch nemesis Donald Trump. So she’ll probably always catch flak for her wardrobe. Just a few weeks ago Newsweek wasted 1,500 words explaining why Melania (and the other Trump women’s) preference for high heels is both “beautiful and horrifying.”

So, while annoying, criticism of successful women’s clothing is par-for-the-course.

But this attack on Melania’s wardrobe was especially disturbing.

“Why, oh why, can’t this administration get anything, even a pair of shoes, right?” Vogue writer Lynn Yaeger wails. I counter with my own question: Why, oh why, can’t the Twitter mob go any amount of time, even during a major natural disaster, without hurling petty attacks against the Trumps, and particularly Melania?

This Attack on Melania’s Shoes is Particularly Bad

In case any coastal elites have forgotten the situation in Houston, here’s a mini recap:

As a Texas girl who’ll take boots over stilettos any day, I can tell the writers at publications like Hollywood Reporter and Vogue that down here, we just don’t care about what Melania has on her feet. In my personal social media feeds, people are sharing updates about their Houston-area friends and family. They’re reposting messages from those stranded. They’re coordinating efforts to get them supplies they need, like food, toiletries and batteries. They’re asking who has boats and other equipment to contribute to the mass rescue effort. They’re sharing stories of heroism, solidarity and encouragement, one Texan to another.

They’re not talking about a pair of stilettos.

Jesse Kelly, a reporter who’s actually in Houston, says it better than I can from my haven of safety in the Dallas region:

This is the home of a Marine Corps combat veteran. It's still pouring here. Can't tell you how little we care about Melania's footwear. pic.twitter.com/wpoy7aaGWp

On Twitter some berated the First Lady for being out of touch. The truly out of touch are those who think Texans give a hoot about what she wore walking out of the White House.

If you haven’t already, please consider helping the victims of Tropical Storm Harvey. LIFE Outreach International, the parent organization of The Stream, is collecting donations here. The Red Cross is also collecting monetary gifts and blood. See here for more ways to help.