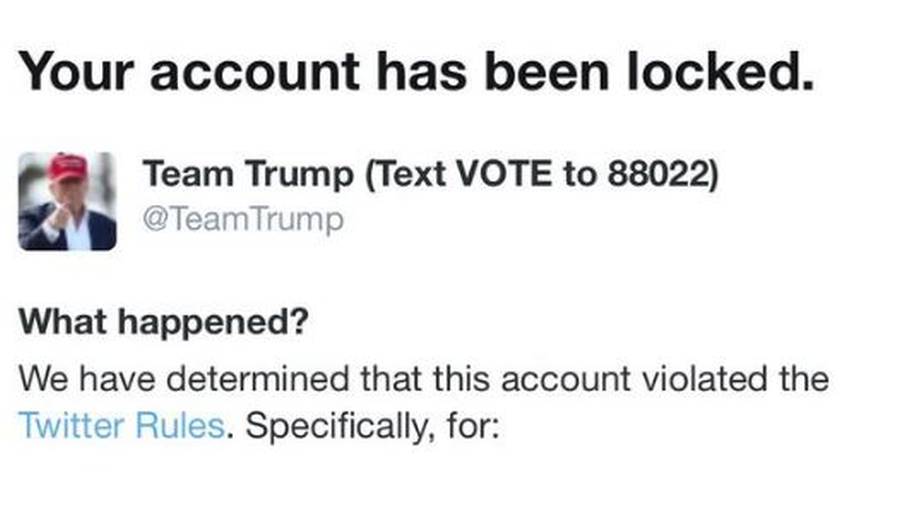 Breitbart is reporting Twitter has. Here’s the big question. Big Tech’s reaction is drastically out of proportion to the story, as we’ll see. Why the frenzied determination to shut the story down? Why are they panicking? What are they trying to hide 19 days before the election?

Twitter branded links to the website of the House Committee on the Judiciary “potentially unsafe.” That’s outrageous.

Wait. It gets even more outrageous. Twitter also locked the official Trump Campaign account! With less than three weeks before the election! (It’s now back up.)

Twitter has suspended ⁦@TeamTrump⁩ for posting a video calling Joe Biden a liar who has been ripping off our country for years, as it relates to the ⁦@nypost⁩ article.

19 days out from the election. pic.twitter.com/Z9FFzridyr

But wait again. It gets even more outrageous than that. What makes this open and despicable censorship so unfathomable is the Biden camp is not even denying the story! Big Tech is deliberately blocking a true story.

As Politico reported Wednesday, “Biden’s campaign would not rule out the possibility that the former VP had some kind of informal interaction with Vadym Pozharskyi.” The campaign said any encounter would have been cursory.

To refresh: The Burisma hot shot Pozharskyi thanked Hunter Biden for setting up a meeting with his father, the Vice President of the United States. Pozharskyi also begged Hunter for tips on how he could use his “influence” – that is, connections to his father.

John Solomon reported last night that Bozharski also met with State Department officials in 2016. Remember, the State Department warned the White House they were getting pressured by Burisma officials, who were dropping Hunter’s name like chips at a casino. And after Trump’s win, Burisma was desperate to settle corruption allegations before Trump took over.

Yet, something about the Twitter and Facebook reaction is baffling. Would they really put their Section 230 exemption at risk for Hunter Biden? As NY Post reports, “Section 230 of the 1996 Communications Decency Act provides tech companies with protections against illegal content posted by third-party users.” They’re platforms, not publishers.

What are They So Scared Of?

I have been walking around the water cooler long enough to have worn the rug clear through. Been a news junkie since I was a kid. Been reporting on the news in one form or other for decades: nationally, internationally, secular, Christian, straight, comedy. Know the news currents like a old fisherman knows the sea.

And something ain’t right. Something’s going on under the surface. Big Tech’s reaction is drastically out of proportion to the story. Again, the Biden campaign isn’t denying the then-VP met the hot shot from the corrupt Ukrainian energy giant.

And even without that denial, can any rational person think Hunter’s $50K a month from Burisma wasn’t paid to grease the wheels with his old man? It’s right up there with “Bombshell: Candidate Kisses Baby at Rally!”

So why the hysteria? Why the frenzied determination to shut the story down at all costs?

I’ve had the same feeling one other time in the past year or so. Why was there a sudden hysteria over Donald Trump’s phone call with the Ukraine President? In a matter of hours, Nancy Pelosi went from rejecting impeachment to insisting on it. The transcript of the call didn’t even come close to explaining the level of panic. The instantaneous blow up into a major “scandal” did not fit the natural growth pattern of a Swamp scandal. Why so out of proportion?

Why the frenzied determination to shut down Trump’s inquiry at all costs?

Well, what was Trump curious about? He wanted to know what the heck the Bidens were up to in Ukraine.

What Was Obama-Biden Up To?

Consider who triggered the Ukraine scandal. That would be the so-called “Whistleblower.” Let’s call him Eric. Eric had been a Brennan guy at CIA, but he had been also Joe Biden’s lieutenant on Ukraine during the Obama Administration. He was in on the call. And he would know the answer to Trump’s question. But instead of answering it, he ran with his pants on fire to Adam Schiff.

Let’s think for a second. Is Eric going to go to Schiff, is Nancy Pelosi going to suddenly race to impeach, are Twitter and Facebook going to put their cushy Congressional protections at risk just to hide a little pay-to-play between Burisma and the Bidens? “Oh, no! Trump is going to find out that Hunter did earn his $50K a month by giving Burisma access to Biden!” No.

Are they even going to go all out like this to protect candidate Joe Biden? Perhaps you can say they’ll do anything to help Biden across the finish line. But it’s not really huge news that Joe lied about his knowledge of Hunter’s business dealings. If you care about it, you already are voting for Trump. If Hunter’s dealings and Joe’s lame answers didn’t bother you before, they’re likely not going to do so now.

So maybe Hunter selling access isn’t the danger causing all the panic. Nor Joe being caught lying. Maybe even Joe protecting his son by blackmailing the former Ukraine president to fire the prosecutor investigating Burisma isn’t the danger. It’s something worse.

The common denominator in these two unusual reactions seems to be a massive effort to block Trump and the American people from finding out what Joe Biden and the Obama Administration had been doing in Ukraine.

Even the Biden campaign’s dismissal of the Post’s story suggests we’re on the right track “Joe Biden carried out official U.S. policy toward Ukraine and engaged in no wrongdoing.”

At the height of the “Ukraine scandal”, Glenn Beck did a masterful, detailed investigation into what Biden and Obama had been engaged in with their “official U.S. policy.” Put simply, they overthrew the Ukraine government via a so-called “Color Revolution.”

The U.S. helped fund and coordinate the “Color Revolution” in Ukraine at a cost of $5 billion. Color Revolution is a progressive revolutionary movement “typically orchestrated by a public-private partnership comprised of government agencies such as the State Department and MI6 and/or CIA, combined with private funding and Non-Governmental Organizations (NGOs).” And who is a big private funder of such NGOs? George Soros.

And looky here. Charlie Kirk posted an interesting tidbit. No, Burisma executive Pozharskyi wasn’t on Joe’s official schedule. However, one day before Pozharskyi thanks Hunter in an email for his VP meeting, Joe Biden was meeting with George Soros and Special Envoy and Coordinator of International Energy Affairs Amos Hochstein at the White House. Seems a curious bit of timing.

Here is Part One of Beck’s investigation:

It wasn’t just Ukraine. During Obama’s reign, we also saw the Arab Spring, color revolutions efforts in Bahrain, Russia, Macedonia and Armenia and beyond.

And the revolution’s coming home. (As the protests show.) Beck has also laid out how these same characters are attempting a Color Revolution right here, right now in America.

Mapping the Rest of the Iceberg

Joe Biden is central to the Obama Administration activities in Ukraine. That his family cashed in from that connection is just the start. It’s not that surprising, nor that important. The former vice resident is the Democratic nominee for president in an election being held in 19 days. We must know the full story. And we must know it now. Period.

The New York Post article is the tip of the iceberg. The tech giants are screaming as if the ship called “Revolution” has already hit the iceberg and is sinking.

We must go under the surface to map the rest of that iceberg. And we must consider anyone trying to stop us from knowing what’s under there an enemy of the American people.

And We, the People must act … and vote … accordingly.