Watch Out for TV That Trains You Out of Caring 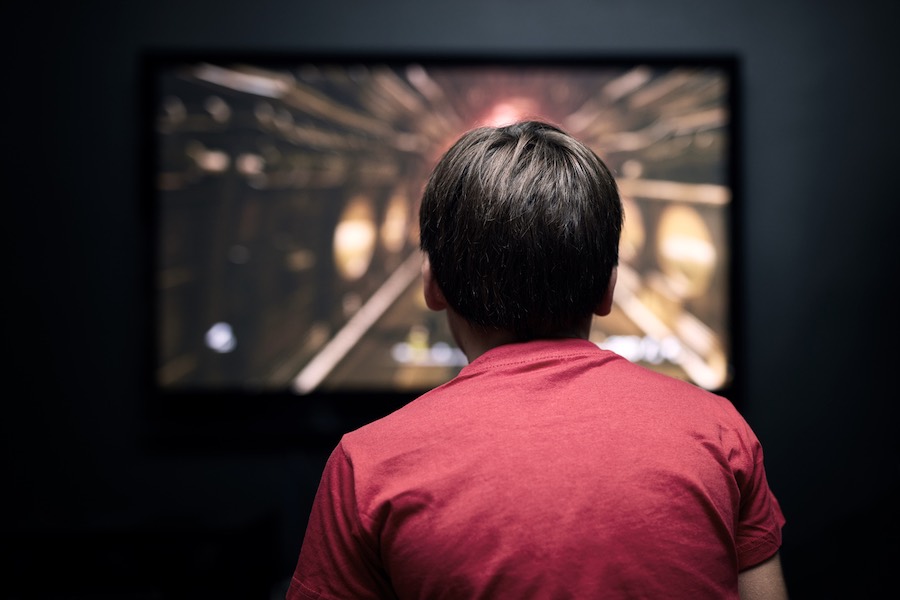 The show was almost ready to roll its final credits. The detectives had solved the murder, the lead cop was back at home relaxing with his significant other, and everything was fine. That’s when it finally hit me: Nothing was fine, least of all the cop relaxing so calmly at home. No, least of all the fact that I’d been sucked in to an awful display of horrific violence, and that it had all seemed just fine.

It shouldn’t have. This episode was above-average gruesome, with murders involving sexual torture and a beheading. That all happened off screen, but results were displayed. I should have had “wrong!” signals clanging all the way through. What finally turned it for me was seeing the detective relaxing at home as if nothing had happened.

I know police are used to a lot. They’re steeled for almost anything. But this particular crime had to have been in a category beyond “almost anything.” Their detachment seemed wrong.

I’ve heard TV and movie producers, and video game creators, say images on screen don’t affect us, because we can all tell the difference between story and reality. I have one strong piece of evidence against that: the advertising industry. You don’t think companies spend billions each year on advertising because it doesn’t do anything, do you?

That’s targeted influence, though, you might say. It’s designed to affect our behavior. I say, so are the characters you watch on screen. Next time a standard network/cable/Netflix show that portrays any Christian as more caring, giving, and compassionate than any gay character, that’s when you can come back and tell me TV isn’t trying to shape your thinking. Don’t bother until then. (Obviously this all applies to streaming media, too.)

At least give me a cop who cares. Because I don’t ever want to be trained out of caring.

What got me about this show, though, was realizing how easily I’d gone along with it. The characters went along with it, too. They had a job to do: solve the crime. They said all the right “sorry this happened” words to the next of kin, but they had to get their statements, and they did.

Other than that, on this show they treated it as a mere puzzle, about as humanly significant as a Sudoku puzzle. Maybe real police treat the most horrific crimes that way, but I doubt it. Yes, I know they learn to compartmentalize their emotions. My guess, though, is they’d call that a necessary loss. They have to do it, but it’s tough squelching your reactions all the time. So why do we subject ourselves to it on screen?

A Real-Life View from the Victim Side

Obviously I’m not in law enforcement; I’ve been on the other side instead: Two of my first cousins were murdered (in completely unrelated incidents). Jump ahead to 25:40 in this A&E Cold Case Files show (you’ll have to wait through some ads) and you’ll see Muriel Kirby, who looks an awful lot like my mother. She should: She was my mother’s sister. She’s talking about the closure gained after David Draheim was convicted, 16 years after the fact, of murdering her daughter, Jeanette.

Her husband, my uncle Paul, had passed away by then, never knowing who’d killed her. Aunt Muriel devoted the rest of her days to an organization called Parents of Murdered Children. For Jeanette’s surviving brother, Joe, and for the rest of us in the family, her murder still hurts 33 years later.

And here I was the other day, watching a show about someone else’s daughter getting murdered, and not caring at all, because, “Hey, it’s just a story. I can handle it.” Then I realized that the more I learn to “handle” it; the more I see cops “handling” it coldly, analytically, like that, never letting even the most brutal crimes bother them at the end of the day, the more likely I am to do that. And the less human I become.

God meant us to be able to handle hard things, but not like that. Not without immense pain. Not without caring. Aunt Muriel suffered, but she remained human. To suffer for another is to be human.

Television numbs us of that. Binge-watching? Even worse. Sure, I’ll still watch some murder mysteries, but with a whole lot more discernment. At least give me a cop who cares. Because I don’t ever want to be trained out of caring.

The Shot Caller: One Man’s Journey From Gangbanger to Christ Follower