Trying to Make Sense of the Philando Castile Case

I'm cautious to make racial accusations, but it would be irresponsible not to at least consider them. 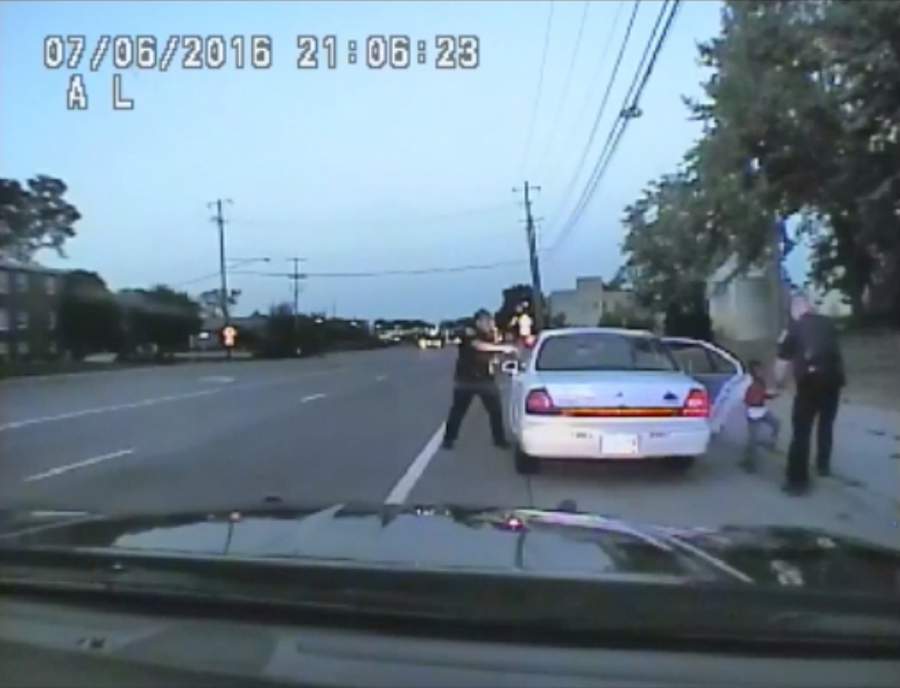 In this image made from July 6, 2016, video captured by a camera in the squad car of St. Anthony Police officer Jeronimo Yanez, the Minnesota police officer shoots at Philando Castile in the vehicle during a traffic stop in Falcon Heights, Minn. Yanez's backup officer Joseph Kauser is seen standing on the passenger side of the vehicle. The video was made public by the Minnesota Bureau of Criminal Apprehension and the Ramsey County Attorney's Office, Tuesday, June 20, 2017, just days after the officer was acquitted on all counts in the case.

As a black man who studies racial issues, I think a lot about our racial controversies. For example, I believe the civil rights movement makes too much of individual shooting cases. The Michael Brown shooting, for example, has been lifted up as a tremendous example of misuse of police power, but the evidence that it was an unjust shooting is lacking. There really are unjustified shootings, but still it seems problematic to focus on those individual situations, when we should be looking at police wrongdoing (where it exists, which it does in too many places) on a more systemic level instead.

But the 2016 Philando Castile case in suburban St. Paul, Minnesota has struck me in a way the others have not. As David French has argued, and dashcam video evidence supports, Castile informed the cop he had a gun and a license for it. The cop (Jeronimo Yanez) gave him two commands — get his license and don’t reach for the gun. He followed the orders: He got his license, assuring the cop he was not reaching for the gun. The cop interpreted him as reaching for the gun anyway. Firing multiple times, he killed Castile. Castile did the right thing and yet is dead.

Recognizing that we experience events like the Castile shooting differently can be a great starting point toward the type of interracial dialogue we need.

I’ve asked my Facebook friends how twelve people could come to the conclusion that Yanez was not guilty. The best explanation I’ve received was that despite all that’s known to the contrary, he truly believed his life was in danger. He had suspected that Castile might be a burglar, so he came into the traffic stop prepared to deal with a criminal. Once Yanez determined his life was in danger, the steps he took were completely legal.

I processed this and other responses to my inquiry. My struggle deepened.

Was Subconscious Racism a Factor?

Of course the first question that comes to mind is whether this is a situation of racism. Since the rationale explaining the shooting was fear, it’s possible this fear was motivated by Castile’s being black. I am not suggesting that Yanez woke up that morning determined to kill a black man. But he lives in a society that has informed him the dangers of black men, and it’s possible that Castile’s race made it easy for Yanez to assume the worst of a situation.

I know what it is like to be feared for my race and sex. I’ve heard car doors lock merely because I am walking along a street. I’ve had people cross the street when they see me. I’ve noticed women clutching their purses tighter around me. This mostly happened when I was younger, but I know from experience that there is a fear of young black men. It’s a fact that we should not dismiss too easily. Even if Yanez was not consciously thinking about Castile being black, he may have been experiencing race-related fear of him on a subconscious level. The jury may have shared the same kinds of racial fears on the same subconscious plane. If so, that could have made them more open to the possibility that the shooting was justified.

A black man did what he was supposed to do, and he was killed. His killer was convicted of no crime. How do you think I will feel the next time I am pulled over by the police?

Of course we can never know what was going on inside Yanez’s mind or the jurors’. It is dangerously tempting to throw around racial accusations, so I am cautious to bring them up. Given the struggles we have had with racism in the United States, though, it would less than responsible not to at least consider them.

Desire For Law and Order

Another possible reason for the verdict is that a pro-police attitude led the jury there. The members of the jury were very sympathetic to police officers’ struggles. Very likely they took into account the fears they believe he faced. According to this view, it might be that even if Castile was white, he might still be dead, and the jury would have still acquitted Yanez. Jurors’ desire for law and order can enable them to give police the benefit of the doubt. For that reason it may be very hard to convict a cop of a crime, even when that cop deserves convicting.

It is also quite possible that both lines of reasoning are true. Fear of black men and a propensity to defend the police can reinforce each other. There can be a general appreciation of the protective role of the police that is distinct from any anti-black fear, but that attitude is tied to a felt need to be protected from scary elements in our society. Black men can be seen as part of those scary elements.

My guess would be that some sort of combined explanation is at play here. It’s likely that fear of black men played some role in Castile’s death and the jury’s decision not to convict his killer.

The Opportunity Before Us

Which brings me to my most important point. As you might imagine, my conclusions here make me uncomfortable. I prefer to give people the benefit of the doubt; I may do so to a fault. But when I see the video evidence from the Castile shooting, what am I supposed to think? A black man did what he was supposed to do, and he was killed. His killer was convicted of no crime. How do you think I will feel the next time I am pulled over by the police? How do you think I will feel if the police want to question one of my sons?

There is value in understanding the stress our racialized society can create for black citizens.

I think this ought to make everyone uncomfortable, for clearly there’s something wrong here. We blacks deal with these questions as a matter of daily living. It is the sort of stress blacks often feel as we see events like these. The fact that we are stressed does not mean that we are always right or should always get our way, but there is value in understanding the stress our racialized society can create for us.

Some non-blacks might feel uncomfortable knowing that we experience events like the Castile shooting differently, but it’s an important truth that affects blacks’ lives. Recognizing it together can be a great starting point toward the type of interracial dialogue we need in order to deal with the persistent racial division troubling us.