What Does Trump’s Victory Mean for the Climate Change Controversy?

Now that Trump has been elected president, U.S. policy could make a U-turn on climate change and energy. 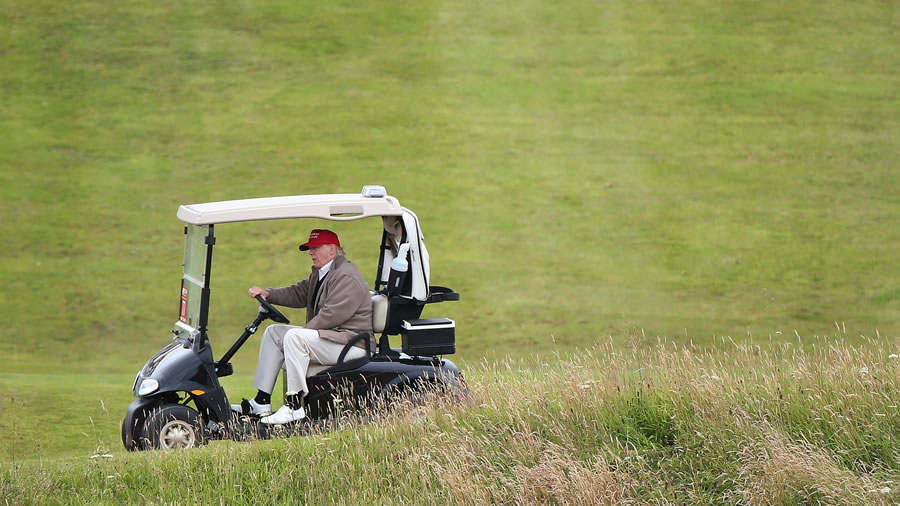 In this July 31, 2015 file photo, President-elect Donald Trump drives his golf cart during the second day of the Women's British Open golf championship on the Turnberry golf course in Turnberry, Scotland.

Donald Trump’s surprising election as President of the United States could lead to enormous changes in policy across the board — on immigration, trade, energy, law enforcement, health care, preservation of First and Second Amendment rights and more.

Two related issues on which U.S. policy could make a U-turn are climate change and energy.

Four years and two days before Tuesday’s election, Trump tweeted, “The concept of global warming was created by and for the Chinese in order to make U.S. manufacturing non-competitive.” That oversimplifies, but it’s not entirely off the mark.

A little over two years later, he tweeted, “Give me clean, beautiful and healthy air — not the same old climate change (global warming) bull****! I am tired of hearing this nonsense.”

He didn’t make his views on climate change a major part of his Presidential campaign, but he certainly made ending President Obama’s war on coal a prominent piece, one that could easily have turned the election in his favor in coal-producing states, especially Pennsylvania.

The battle against climate alarmism is far from over. It’s heating up.

James Delingpole, an outspoken and well-informed critic of climate alarmism, thinks that “The liberal-left just lost the ‘battle’ against climate change” — by which he means it has lost the battle for things like the Paris climate treaty, the Clean Power Plan (CPP), blocking the Keystone XL pipeline extension, shutting down the coal industry and increasing already absurd subsidies for solar and wind energy.

True, Trump has said he wants to back out of Paris, scrap the CPP, approve Keystone, and end the war on coal. But I wouldn’t count those chickens before they hatch. The battle against climate alarmism is far from over. It’s heating up.

Four Reasons the Climate Alarmism Battle is Far From Over

First, the billion-dollar-a-day government-funded climate-change research-related industry in universities, think tanks, and businesses around the world won’t just roll over and play dead. It has far too big a stake. Its lobbyists will shift into high gear, knowing they now must overcome an administration opposed to their agenda.

Second, America’s and the world’s environmental advocacy organizations, many with annual budgets in the hundreds of millions of dollars, backed by Left-wing foundations with trillions of dollars, will focus on persuading the Trump Administration, members of Congress, and the general public that climate change really is the sword of Damocles.

Third, the mainstream media will crank up the volume on its message that anybody who questions man-made warming being so dangerous as to warrant spending trillions to slow it even by undetectable amounts is stupid, insane, evil or all three.

And fourth, the thousands of Left-wing “non-political” career “civil service” bureaucrats in the federal departments of Interior, Energy, Commerce and Agriculture, and especially the Environmental Protection Agency, will fight tooth and nail against every effort to slow their composition of more and more economy-strangling regulations, let alone roll back those they’ve already imposed. It isn’t just that they’re convinced their regulations are needed. It’s because their ongoing jobs absolutely depend on spreading fear to keep the regulatory monster growing.

And that may be the toughest front in the war to recover sanity in American environment, climate, energy and economic policy.

A Suggested Strategy for Trump

“Personnel is policy,” and every President has experienced the frustration of bureaucrats blocking their efforts to achieve what they promised voters. Just think of President Reagan’s failure to abolish the Department of Education.

President-elect Trump might be better positioned to overcome that resistance than most new Presidents, because he’s largely an outsider to the Washington establishment. But that strength could also be his weakness. How can he possibly be prepared for what he’ll face in the world of bureaucratic agendas and machinations, a world so different from the business world in which he’s spent his entire career? He’s about to discover that, with people whose jobs are secured by the Civil Service Act, he can’t just up and say, “You’re fired!”

Instead, he’s going to have to appoint truly knowledgeable people as secretaries, undersecretaries, and assistant undersecretaries of dozens of federal departments and agencies, people committed solidly to his agenda. (And he’s got to find them first! He did well announcing in late September that he would appoint the Competitive Enterprise Institute’s Myron Ebell to head his EPA transition team.) Then he has to demand that they perform — or be dumped.

Trump will have to appoint truly knowledgeable people committed solidly to his agenda.

He’s also going to have to work hard with a Senate in which all 47 to 49 Democrats and a fair number of the 51 to 53 Republicans are true believers in dangerous global warming, and a House in which all 193 Democrats and a not insignificant number of the 239 Republicans are, too. Getting them on board with his policy initiatives will be a monumental task — one that the climate industry, Green campaigners, mainstream media and entrenched bureaucrats will oppose with all their might.

What do the American people, members of Congress, President Trump and his Administration need to know? That while man-made emissions of carbon dioxide and other so-called “greenhouse” gases are likely to make the earth’s atmosphere slightly warmer than it otherwise would be, the added warmth is likely to do as much good as harm, while the abundant, affordable, reliable energy we get from the fossil fuels that lead to those emissions raises and keeps billions out of poverty. Depriving the world of that energy, forcing it to use costlier, less reliable wind and solar, will do far more harm than man-made climate change.

The Cornwall Alliance for the Stewardship of Creation’s Open Letter on Climate Change to the People … of the United States, our major research papers including A Call to Truth, Prudence, and Protection of the Poor 2014: The Case against Harmful Climate Policies Gets Stronger, and our recent video documentary Where the Grass Is Greener: Biblical Stewardship vs. Climate Alarmism, are samples of our hundreds of educational tools. God providing the resources, we plan to issue many more, including hundreds of articles in newspapers, magazines, and web-based publications in coming months and years.

Calvin Beisner, Ph.D., is Founder and National Spokesman of The Cornwall Alliance for the Stewardship of Creation, a network of over 60 scientists, economists, theologians, ethicists, and policy experts.

The Population Bomb, Climate Change, and Other ‘Crises’